After losing two bombers in my first nine missions, I created a new plane and crew. This one is the Winged Avenger.

I kept a few notes of the four missions I flew last night, so you can get a feel of how games pan out.

The first mission (Mission 10) was the last of the 'intermediate' ones, which all take place within the range of fighter cover. Once again it was an attack on the aircraft works at Meaulte; a simple hop across the Channel and an easy run for a new plane and crew.

Despite the fighter cover Winged Avenger came under attack twice from FW190s which dived straight down onto it. On a second pass one of them seriously wounded the radio-operator, Sgt. Jonah Dorsey. Flak over the target knocked out the tail-guns too. This also threw off the bombardier's aim, and they completely missed the target. The only attack on the way home saw the ball-gunner, Sgt. Bert McKnight, shoot down an Me110; the crew's first kill. The plane landed safely. Sgt. Dorsey was invalided home and replaced by Sgt. Duane Spence.

Some hits in the game translate to Superficial Damage. This has no effect, but I recorded the number of times it came up so that you can get a feel for how much action the plane saw. On this mission the Winged Avenger came home with 3 Superficial Damage. 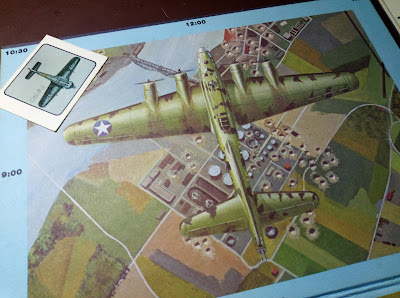 Mission 11 is the first of the 'advanced' ones, where any target on the board is a possibility. A lot of these will take the bomber beyond the protection of fighter cover, but not this first one. The squadron was sent to bomb the shipyard at Rotterdam.

The trip out was uneventful, but despite bad weather over the target the Winged Avenger drew a lot of attention from enemy aircraft. 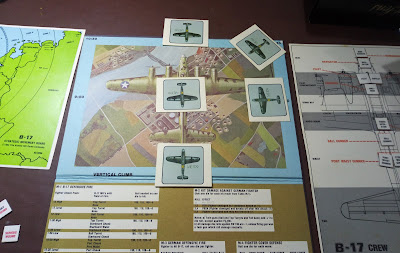 Fortunately the aircraft were driven off with no significant damage being caused. There was negligible flak protecting the shipyard, but the bad weather prevented the bomber from lining up a decent run, and again the crew missed the target altogether.

The Winged Avenger turned for home, but came under attack from a lone FW190, which caused a hairy moment when one of its shots hit a fuel tank, and a number of light wounds on the crew, including the bombardier, and both waist gunners. 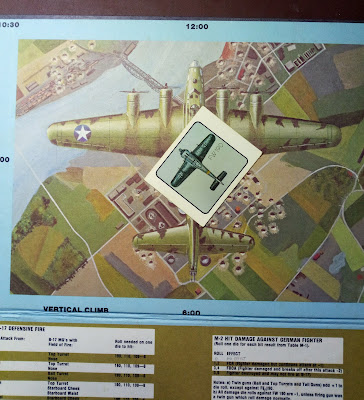 Over the North Sea a lone Me110 attacked the bomber, taking out both the rudder controls and the intercom. The latter hit affects the crew's ability to engage enemy aircraft effectively, so is a nasty hit on a long mission. Fortunately there were no further attacks and the Winged Avenger landed safely. This time it had taken 6 Superficial damage. No crew were lost, and no kills achieved. 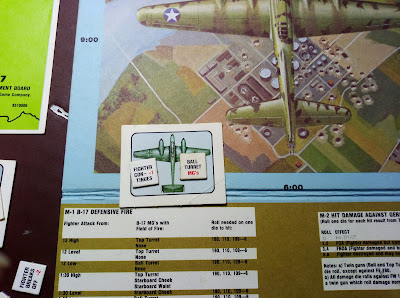 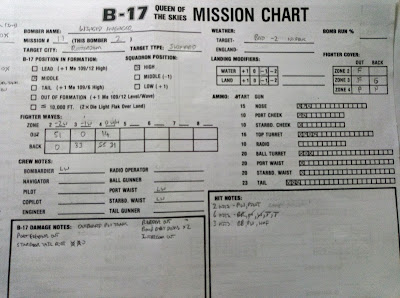 Mission 12 was the crew's first one which would take them beyond their fighter-cover - an attack on the railyard at Rennes. The trip out would have been considered uneventful, aside from another lone aircraft attack, which saw a Me110 shoot up the radio-room, and seriously wound the operator. However the Germans seemed to have saved up their fighters for the target itself; the Winged Avenger had to fight off three waves of them before making its run. And fight them off it did, with both the ball-gunner Sgt McKnight and the tail-gunner, Sgt. William Anthony taking out a single FW190 each. However it wasn't all good news. The attacks saw the radio operator, Sgt. Duane Spence, killed and the radio destroyed.

There was heavy flak over the objective, and one burst seriously wounded Sgt. Anthony, leaving the Winged Avenger without its tail-guns for the trip home. The flak, plus the loss of teh autopilot to an earlier attack, meant that, once again, Winged Avenger's crew completely missed the target.

The trip home was mostly uneventful - fortunate for a plane with two gun-positions out of action. The only serious attack saw the navigator, Lieut. Wayne Beach, shoot down an FW190, bringing the crew's total for this mission to three.

The plane landed safely, but Sgt. Anthony died of his wounds, leaving the crew down two members. Superficial Damage amounted to 18, showing that the aircraft had seen some considerable action. 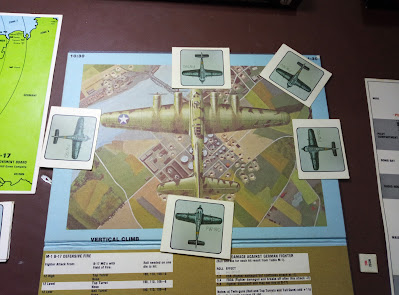 Mission 13, the last one I played, was a big one - long run to Germany to bomb industrial targets at Emden. This would see the Winged Avenger fly well beyond its fighter protection. In addition the plane was assigned to the lowest squadron position; one which would attract the most fighter attacks.

On the way out the bomber was attacked by five Me109s, but they saw them off with negligible damage, and both the ball- and tail-gunners picked up kills. Two more Me109s were shot down over the target.
Over the target the plane took a flak hit which killed the starboard waist-gunner, Sgt. Dexter Donovan. The flak hit also saw the Winged Avenger veer off-target, for yet another miss. As the plane turned for home an attacking Me109 knocked out the top-turret. With no guns to fire, the engineer left his position and took over the much-needed starboard waist gun, until some later damage saw the suit-heater for that position damaged, forcing him to return to the top-turret or risk frostbite.
Surprisingly, for such a long mission, enemy fighter activity was relatively low. However on the last stage a lone Me109 attacked the plane. Despite being damaged by defensive fire, it raked the Winged Avenger from below, knocking out #2 engine, as well as seriously damaging the plane's landing gear and control surfaces.

Fortunately despite this damage the pilot brought the Winged Avenger down safely, albeit not without risk. The plane had taken 5 Superficial Damage. Most of the actual damage was caused by one flak burst over the target and that final Me109 pass on the way home. The crew had shot down six enemy aircraft, all Me109s; Lieut. Wayne Beach took one, Sgt. Holden on the tail-gun got two and Sgt. McKnight three, promoting him to an ace.

This was the bomber after it landed. 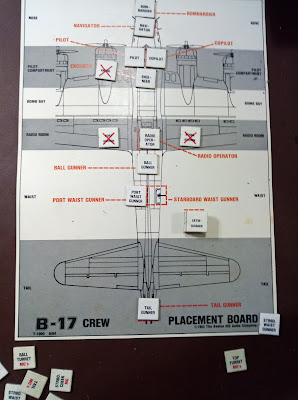 And here's the current Mission Record. Since I took the photo the new starboard waist-gunner has been assigned - Sgt. Oscar McBride. 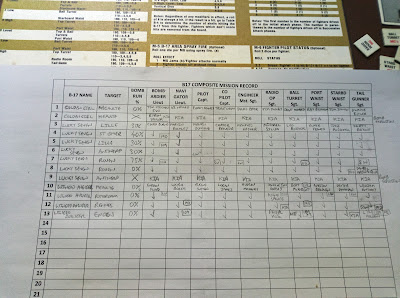