I tried some more experiments with my ECW Portable Wargame activation yesterday.

In the first game I gave one free activation if the commander was active, plus 1D6 per unit, requiring 3+ to get activations. I set up a scenario where a small Royalist force of two units was defensing a river-crossing, with six Parliamentarian units attacking. At some random point the Royalists would get four units of reinforcements. I thought that would give a nice test of disparate forces, for at least part of the game. Activations still had to be done from either left to right or right to left, with units furthest from the baseline acting if there was more than one unit in the particular file.

Both sides had three regiments of foot, two of horse and one of dragoons, all classed as trained.

Here are the Royalist defenders; a regiment of foot and one of horse. 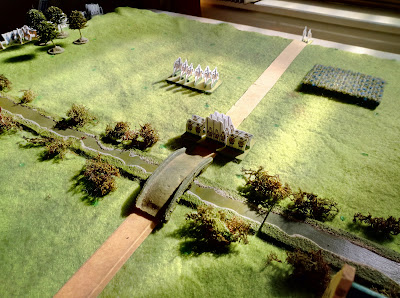 The advancing Parliamentarians. I randomised each unit's entry point, weighting foot to the centre and horse to the flanks. 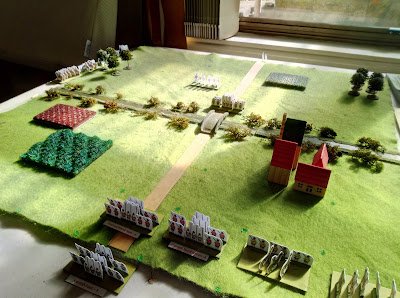 Initial attacks on the bridge. I did allow the river to be crossed at any point, but there were movement and combat penalties if it wasn't done at the bridge. You can see some Parliamentarian foot crossing to the right of the picture. 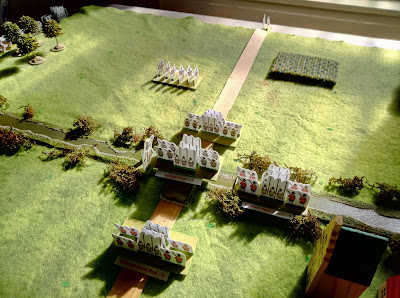 The Royalists moved their horse to block the crossing; a unit crossing the river couldn't shoot, so the foot had a tough fight to make the opposite bank. However their own horse had crossed further downstream. 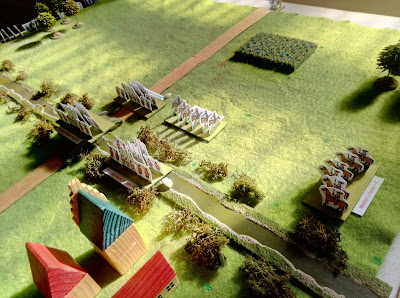 The Royalist reinforcements arrived. The bridge defenders had held, but with some casualties. However their left flank was in trouble and the Royalists would need to strengthen it quickly. 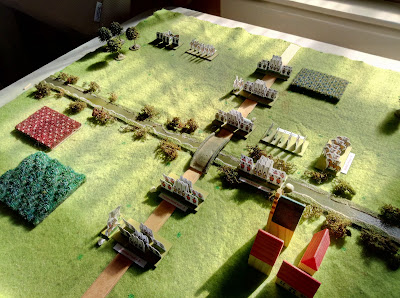 Parliament's foot pushed across the river, whilst their horse rallied after some setbacks. 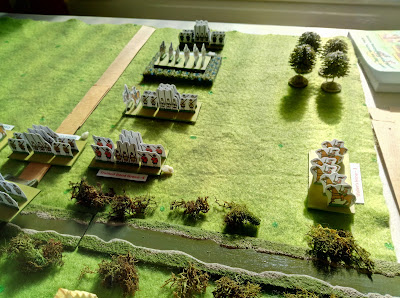 The battle continued. On Parliament's right they were across the river, but the bridgehead was under attack. In the centre they were still fighting hard to take the bridge. 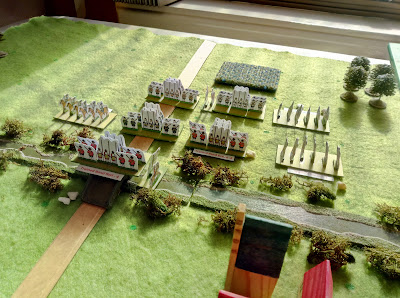 The Royalists quickly got the upper-hand, though, and Parliament's casualties caused them to break on the first army morale test. 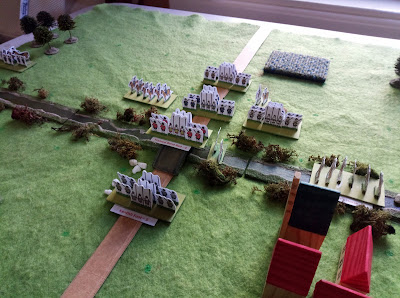 The activation system worked OK, and seemed to activate enough units to keep the game free-flowing and interesting, whilst still requiring some decisions to be made about where to act. However I found the extra activation for the commander annoying to implement, so came up with a smoother way of doing things for the second game.
The second game was set up like the first, except units could no longer automatically cross the river; they had to expend an activation and try to discover a ford, needing a '1'. If they failed then that section of river couldn't be tested for by either side for the rest of the game.
In terms of activations, I now simply rolled 1 D6 for each unit including the commander. Each dice which rolled 3+ could be assigned to a unit, or given to the commander, allowing him to be moved (at the very start of the turn) or replaced if lost (at the very end of the turn). A lost commander didn't generate a dice though.
Once again the Parliamentarian entry was randomised and they all ended up appearing on their right flank, obviously interested in the small village there. 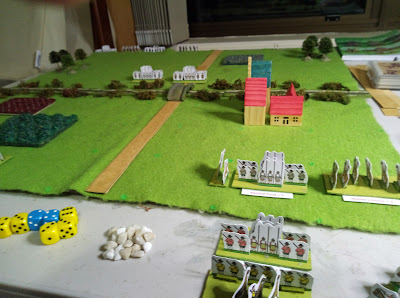 The pushed their foot forward to the river, whilst the dragoons scouted for fords. The horse was held back as there was little for it to do at this stage, since rough terrain along the river's edge made it a chore to scout. 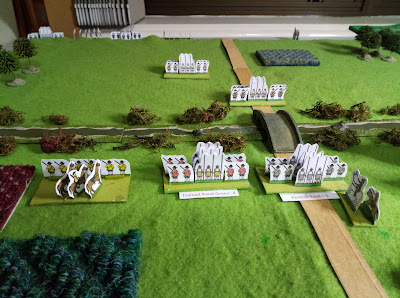 The dragoons found a ford and started to cross. Meanwhile the foot assaulted the bridge. 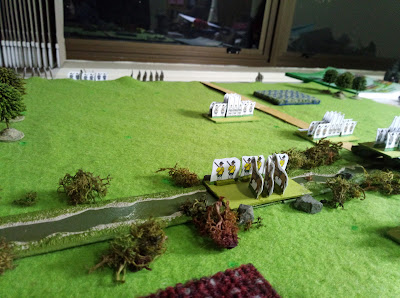 However at that moment the Royalist reinforcements arrived, and with great energy (lots of activations) swiftly deployed. 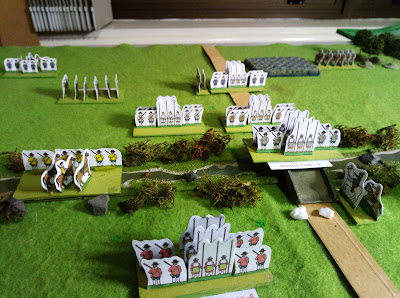 On their right the Royalists dragoons took up the defence of the ford, driving back their Parliamentarian opposite numbers, but finding an advancing foot regiment a tougher foe. In the centre Parliament pushed back the defenders at the bridge and crossed the river. 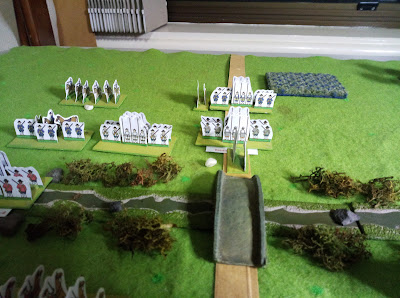 However at that moment their commander fell, causing them to lose momentum as they replaced him. 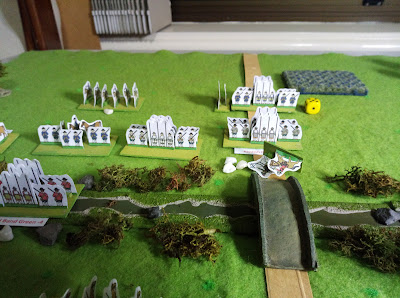 The Royalists could have exploited this, but on the next turn their commander fell. 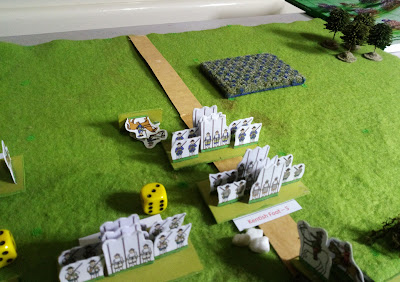 The Royalists rallied faster, and pushed Parliament back to their side of the river. 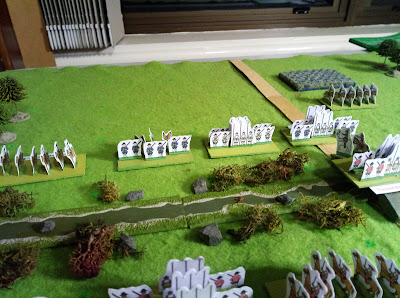 But Parliament sent in a second wave of troops, including their horse. The Royalist dragoons were routed. 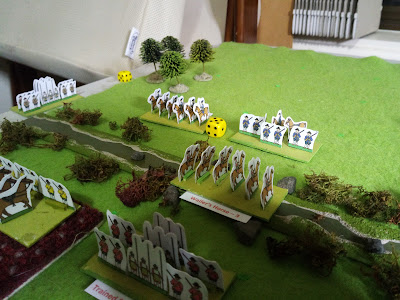 Parliament soon had troops across at both the ford and the bridge. The fighting was fierce, and both sides reached their army breakpoint. Parliament passed their first morale test, but only just - their nominal holding of the objective saved them. The Royalists survived their first test. This was too much for Parliament, who withdrew their forces. 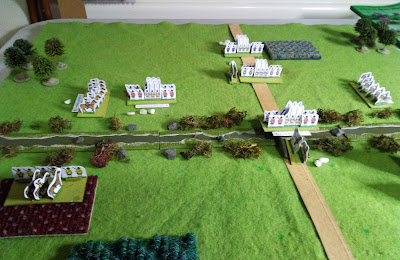 This second game was really close, and quite dramatic with both commanders falling so close together. The activation system worked smoothly and was easy to administer, with the choice of which direction to run the activations in being key on a few turns.
So the current turn sequence, for each side, is:
(i) Roll Random Event
(ii) If the army has reached its breakpoint, test morale.
(iii) Roll 1 activation dice per active unit (including the commander). Each D6 which score 3+ gives an activation.
(iv) If desired, spend an activation to relocate the commander.
(v) Assign activations to units. This is done before any of them act. If you wish to replace a lost commander, keep an activation to one side.
(vi) Activate units, one at a time, either from the left to the right or the right to the left. If more than one unit is in a file, activate those furthest from the baseline first.
(vii) If you kept an activation to one side, replace a lost commander.
I ran the following random event process:
Roll 2D6. If a double is scored, there is a random event. Use the number rolled as First D6. Roll a Second D6 to determine the specific event.
First D6 - 1-3
Second D6
1-3 - Inspired Command - You get activations on a roll of 2+ this turn
4-6 - Poor Command - You only get activations on a roll of 4+ this turn.
First D6 - 4-6
Second D6
1 - Confusion - The enemy player picks one of your units and resolves an activation for it. If it fights in close combat it does so at -1. The unit does not give this side a D6 for activations and can't be activated again this player turn.
2 - Commander Indisposed - The army's commander does not give the side a D6 this turn, and neither may he be redeployed or replaced if currently lost. He may move if the unit he is attached to moves, but doesn't offer any combat bonuses this player turn.
3 - Panic - The enemy player picks one of your units, which immediately takes a 1SP hit. This cannot cause it to be destroyed, however.
4 - Brilliant Colonel - Pick a unit. That unit may immediately make a free activation. It still generates and activation dice and can activate again in this player turn.
5 - Rally - Pick a unit that has taken one or more hits, and roll 2D6. For each that score 4+, remove one hit.
6 - Inspiring Speech - EITHER Pick a unit. That unit gets a +1 the next time it either shoots or engages in close combat OR if you have to take a morale test this turn, you get a +1