We had another game of Shakos and Bayonets on Thursday, with more troops and more terrain than the previous game. This time we even had cavalry. Caesar and Theo took the British, whilst Ian and I were French. Gary adjudicated. 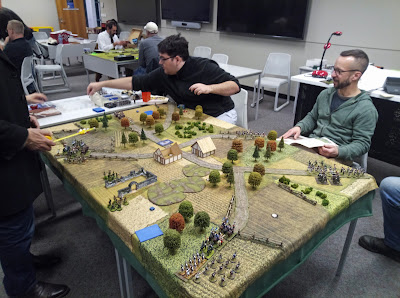 These chaps were my responsibility. We played the basic encounter scenario, in a fairly wooded area, which really cut down the lines of fire. 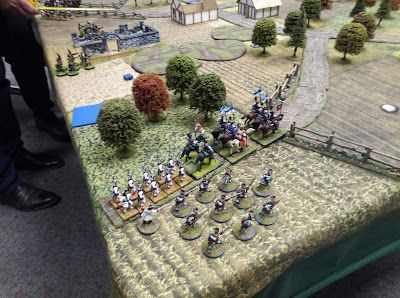 Dashing French cavalry. I sent them off down the road on the hope that in the dense terrain I could jump on the British foot before they had chance to fire. 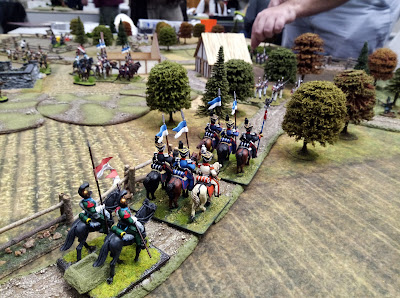 In fact Caesar moved his infantry out of the way before I got chance to move. A failure in our side's organisation of leaders and troops assigned to them meant that our cavalry wasn't as dynamic and responsive as we'd hoped it would be. Some British cavalry soon faced me down the road. 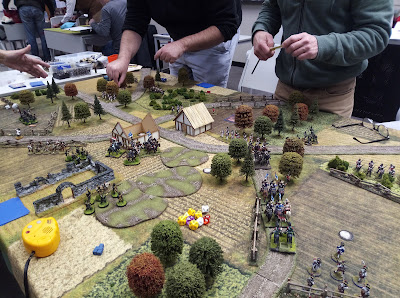 More French cavalry. This was Ian's. His got shot at and fell back. 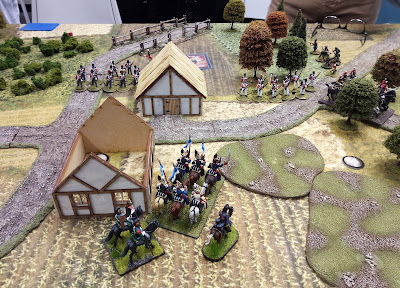 On Ian's flank units of foot exchanged volleys across a field. Amazingly the French did OK here, inflicting some real damage on a group of British guard veterans. 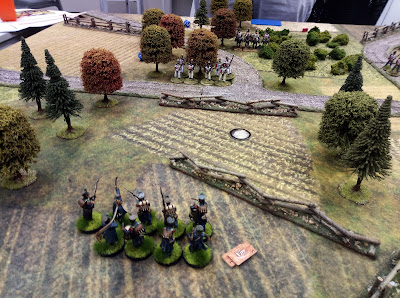 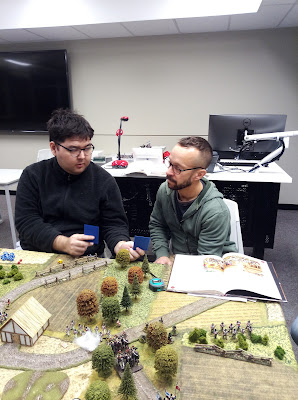 They let our cavalry act, so I charged. Unfortunately despite our Gallic superiority (and numerical one) the melee was inconclusive and we fell back with roughly equal casualties. 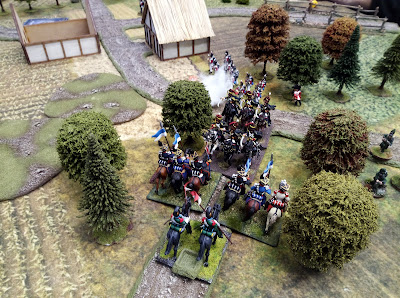 The British line were forming up impressively on their side of the board. 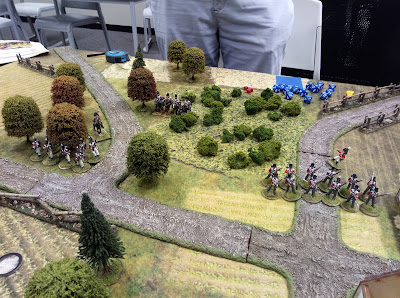 Another French volley caused consternation for teh British. For a moment we thought we'd shot one of their leaders, but it turned out that a sergeant was the man we hit. Curse the rules for transferring leader casualties to a nearby unit ... 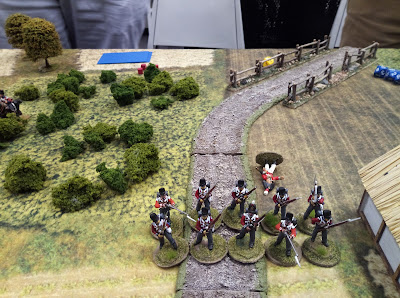 Anyway, at that point we called the game. We're still learning, so it was taking us longer to play and run than it should. This isn't a set of rules you can quickly get into your head; there's a lot of factors and numbers to play with, and some mechanisms can be a bit fiddly; a firing unit may have figures with different fire factors based n range and intervening cover, and it all have to be tracked and calculated. None of it is complicated, but it is a little fiddly.

Since I'm writing the history I'm claiming a French victory, since we actually bothered to take one of the four objectives - the British concentrated on marching around and shooting Frenchmen. They would claim that it was an indecisive draw, but then they would, wouldn't they.
Posted by Kaptain Kobold at 10:48