Last night we gave Shakos and Bayonets an outing. This is the Napoleonics supplement for the Muskets and Tomahawks system, itself a black-powder skirmish game in the vein of Sharp Practice or Rebels & Patriots.

The system itself is card-driven; both sides draw from a common deck and there are cards allowing either side to activate certain units. Thus your hand may contain cards that will activate enemy troops. You have to play all of the cards in your hand before you draw any new ones, so you will be allowing the enemy to act but, obviously, they won't be aware of what activations they're going to get until you reveal them. Each side also has command points, which are generated by leaders, but also accumulated for other game effects - specifically if you play an enemy activation card. On your turn you can forego playing a card to use command points instead; their expenditure gives you a range of options, offering a little more flexibility than the card-play.
Anyway, we set up a basic encounter between British and French forces, with about six units per side. Apparently each figure represents around 5 men, so our  eight-figure units represented groups of about 40 soldiers each. Here's the terrain with most of the units deployed around the edges. The game uses deployment points, so you aren't restricted to your side of the table, although there are limits on placing them in close proximity to enemy deployment points. 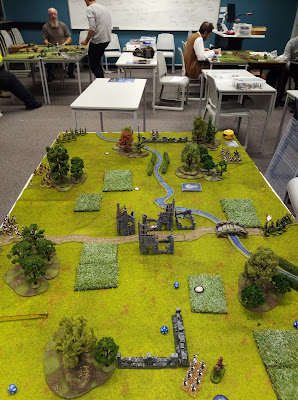 This was my force, which I deployed to strike down the central road into the ruined village, where there was an objective marker. There were five objectives, and if someone controlled a majority of them at the end of a turn then they won. The end of a turn is randomly determined - driven by the card-play.
Anyway, I had two line units and one of grenadiers, plus a leader. Caesar was the other British player and had two line and some lights. He was deployed to my left where there were a number of objectives scattered through the woods and fields. 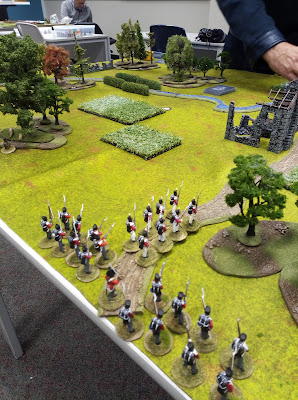 My grenadiers pushed down the road towards an objective in one of the houses. Opposing them were French guard. 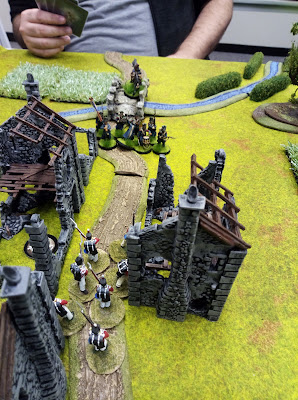 The rest of my troops advanced slowly, ready to strike off in any direction in support or to grab an objective. 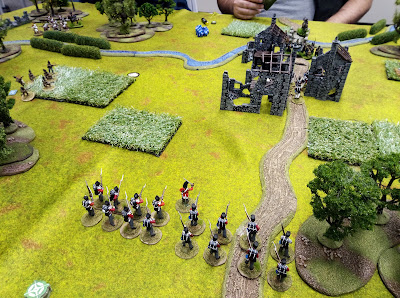 Caesar's troops got straight into action as teh French light infantry appeared in the left corner of our baseline. Their initial file drove off our lights, but a volley from one of Caesar's line units stopped them cold for a period of time. 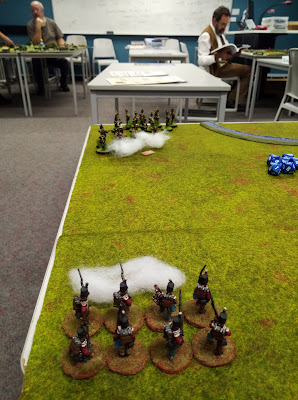 Caesar's other line unit had managed to deploy behind a wall near the side edge and close to the French baseline. As teh French advanced they fired a series of deadly volleys that decimated one unit and saw the other seek cover in teh woods. However the French took one of the objectives and their presence made an advance by the British to grab it off them very tricky. 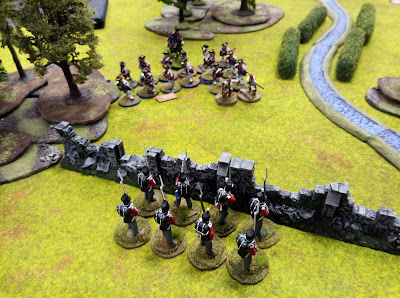 Meanwhile in the village the grenadiers had dispersed into the ruins and opened fire on the Guard, taking out a couple of figures. 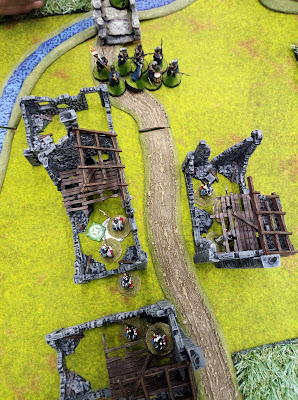 As the rest of the British advanced the Guard fired a volley, inflicting casualties on both teh grenadiers in the houses and on the line advancing down teh road. The line fell back shaken, but the grenadiers held. 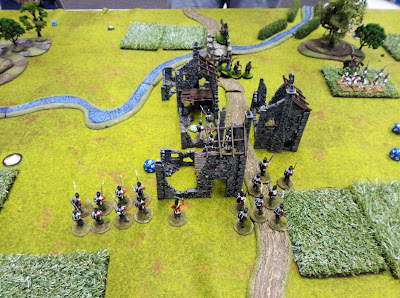 Ian brought up one of his line units, (who looked somewhat revolutionary, thanks to us being short of figures), and they assaulted on of the houses in the village. The few grenadiers in there saw off the French; no casualties on either side, but there's a lot to be said for holding a building, even if you are outnumbered three-to-one. Being grenadiers helped as well, it has to be said. 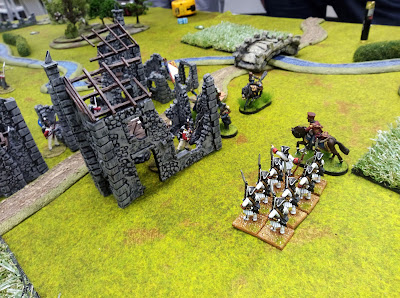 Anyway, at that point we called the game. Only one person had played the game before, and two of the others had read the rules, so we'd taken the whole thing very slowly and had to look a lot of things up. I was the fourth player, who had neither played before nor even read the rules, but I picked it up pretty quickly. At its core it's not a complicated game, but we found we were looking up little rules here and there and double checking things for clarity. I did feel that there were a lot of factors affecting things like firing and melee that weren't necessarily easy to remember, but maybe that will come in time. Ian had reservations about how skewed the card draws could be - on one pair of hands we got a handful of British activations, and the French had some too, leaving the French relatively inactive. However on the next pair of hands the situation was reversed. However it did leave him feeling that you might regularly get one side helpless in the face of the actions of the other. I think we'd have to play more games and see how it pans out.

The fight was a draw, with both sides controlling two objectives each and one still contested. Obviously my grenadiers, who held off the Guard with their shooting and another French unit in close combat, were the true winners. This is the advantage of writing the official history.
Posted by Kaptain Kobold at 11:26