I set up my Portable Wargame Newbury scenario again last night, using the new initiative/activations system, this time unchanged from the previous game.

Once again I randomised the deployment plans. Parliament (left) went for a front line of alternating foot and horse, with a second line of foot, whilst the Royalists (right) went for a shorter double line, with their foot to the fore and their horse behind, ready to strike out in either direction. 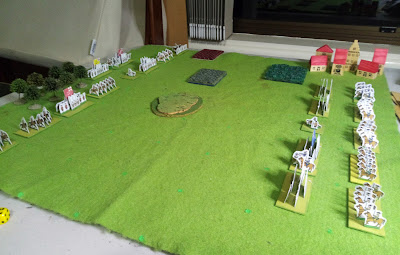 Both sides pushed forward, and reorganised, with neither making any wild advances. In this game there were more units in the enclosures towards Newbury (the far end of the board). 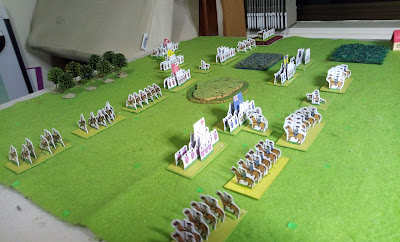 Parliament made the first attacks, with their horse striking at the Royalists on Wash Common. Unlike the previous game the combats were relatively inconclusive to start with. 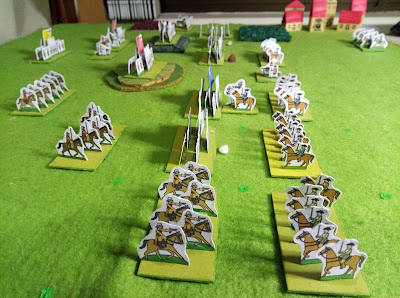 On their left Parliament quickly gained an advantage, moving horse and dragoons through the enclosures to strike the Royalist right flank. 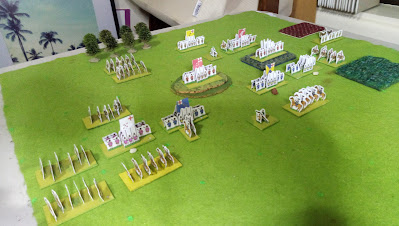 The raw Royalist foot stationed there quickly ran, but Royalist horse did their best to stabilise the situation. However their raw horse quickly came unstuck trying to take on Parliament's dragoons in the enclosures. 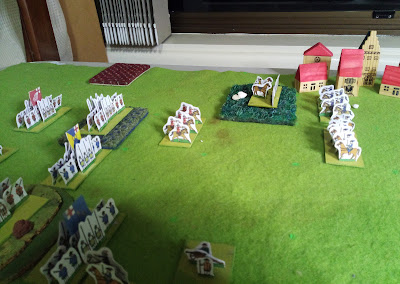 On the Royalist left they were slowly gaining the upper-hand in the cavalry combats. 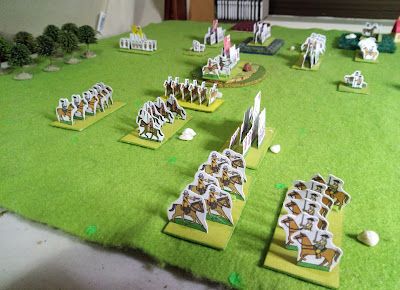 In the centre the Royalists attacked Round Hill. The obligatory infantry slog commenced. 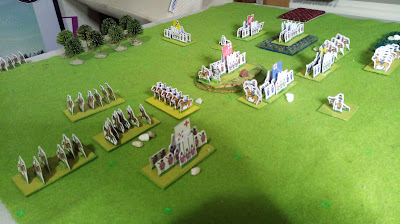 Parliament reached their break-point first, but with the hill under their control, and actual unit losses relatively low they easily passed their morale test. They then inflicted enough casualties on the Royalists to force them to their break-point; breaking the unit attacking the hill was key here. With three units lost, and Parliament still seemingly in control of teh centre, the Royalists withdrew. 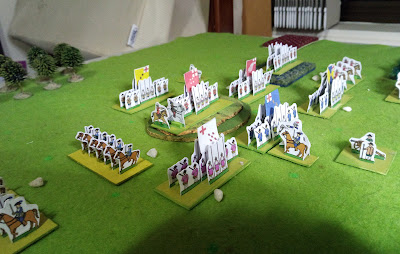 In fact the Royalist position wasn't a bad one. They still had foot available to take the hill, and had pretty much gained superiority of horse on their left. The situation in the enclosures near Newbury wasn't good, but a concerted strike at Parliament would have probably seen them run. But it wasn't to be.
The new systems worked fine, with both sides generally getting plenty of activations, but both also being starved of them at critical moments. Three random events came up, all for Parliament. They had one turn of increased activation chances (2+ instead of 3+) and two consecutive turns where their commander was indisposed and could neither move nor influence combats.
Posted by Kaptain Kobold at 10:06