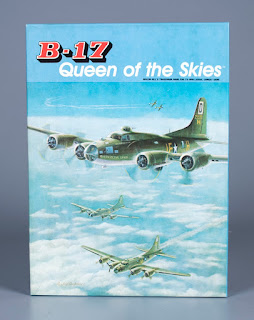 Over the past week I have flown some more missions with my current B-17 bomber, Winged Avenger. When we left it last it had been on four missions but had completely failed to hit a single target. Would this run of bad luck end soon?

Winged Avenger's 5th mission was to the u-boat pens at St Nazaire; a fairly difficult one. The trip out was mostly without incident, but just outside of the fighter cover a Me109 strafed the plane killing the bombardier, Lieut. Floyd. This left the crew unable to complete the mission, so they aborted and turned for home. The fighter cover mostly protected them, although an attack did knock out their radio. Sgt. Holden on the tail-guns picked up another kill - a 109. The plane to 6 Superficial Damage.

Lieut. Shannon was assigned as the plane's new bombardier, and the squadron's next target was an industrial one, Emden. Over the North Sea the plane was attacked by Me109s, one of which knocked out the plane's entire oxygen system. Once again the decision was taken to abort the mission. A group of three FW190s attacked as the aircraft made its way home, but the crew drove them off without taking any further damage. Indeed the superficial damage for this mission was zero, and Lieut. Shannon picked up a 109 kill on his first mission.

The next mission, the plane's seventh, was another long one - the u-boat pens at Kiel. Winged Avenger got halfway to the target when a 109 strafed the plane, knocking out the radio (again), wounding the navigator and seriously wounding the starboard waist gunner. It also damaged the bomb-bay doors. So once again Winged Avenger turned for home, having failed to reach the target.

This trip home was not straightforward, however. Wave after wave of fighters attacked it all of the way, forcing the pilot to evade in order to survive. Despite that the starboard gunner, Sgt. McBride, was killed, and the co-pilot, Capt. James, was seriously wounded. The tail was also badly shot up. Winged Avenger made it home though. Capt. James was invalided home, being replaced by Capt. Dixon, whilst Sgt. Rice took over the starboard waist gun. The plane took 8 Superficial Damage.

After two longish missions (or potential longish missions) the crew were happy to be given something over France - a relatively simple run to Rennes. Or so it seemed. At the end of the fighter-cover zone an attack saw not only the top-turret knocked out, but also the intercom., as well as damage to one of the engines. For the fourth time in a row the decision was taken to abort. Another attack saw the tail-gunner's oxygen hit, forcing the plane to drop altitude. A third attack was an even greater disaster, as a hit on the cockpit saw both the pilot and co-pilot killed. Mst. Sgt. Mahoney, the engineer took over. As he did so and FW190 appeared. It's fire raked the bomber, and hit one of the fuel tanks. Suddenly Winged Avenger became a ball of fire. None of the crew made it out. Before teh explosion winged Avenger had taken 20 points of Superficial Damage.

So I need a new bomber for missions 18 onwards. And that's the third complete crew I have lost.