The past couple of days I have been pondering an alternative activation system system for my ECW Portable Wargame. This was driven by the fact that the probability of scoring hits is fairly low which, oddly enough, I am happy with, but which combined with only around half the units on a side acting each turn led to some slow and static games. I had considered simply allowing every unit to act each turn, but wasn't sure I wanted to go there.

So I went for a compromise. I switched to a straight IGO-UGO system; moves alternate from one side to the other in a conventional manner. Then I followed this procedure:

On each turn the player rolls 1D6 for each unit they have in play.

Each score of '1' is assigned to a unit; those units cannot be activated this turn.

Each '6' is then assigned to a unit. They can act out of sequence.

Other units are activated according to the following rule. The player chooses to activate their units left to right, or right to left. Each unit is activated in that sequence. If there are multiple units in a file, the ones closest to the enemy baseline are activated first.

So units with a '1' assigned don't activate, and those with a '6' can be activated at any point during the player's turn. If you want to move a commander then a unit activation must be used - pick a unit and count it as having rolled a '1'.

It's simpler to play than explain.

Unfortunately it did make the random event system I used in these rules redundant, so I rolled for those at the start as well. I'm still pondering the best way to do this though.

I tested it out with the Alton scenario I played last year.

Here's the battle from behind the Royalist position in Alton. 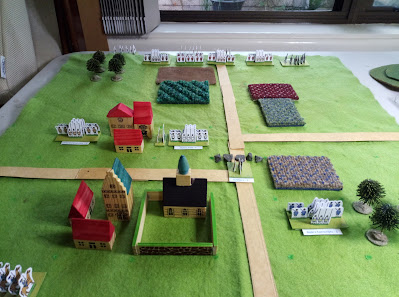 I gave Parliament the first move, and they advanced rapidly through the enclosures towards the town. 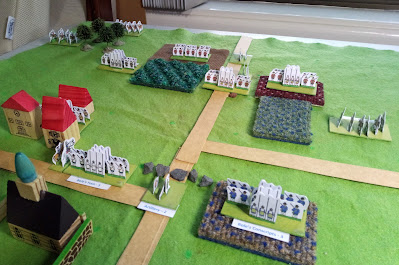 The Royalists reorganised their position, with two units of conscript foot occupying enclosures on the right and some buildings on the left. Bole's elite foot occupied the centre with the artillery. 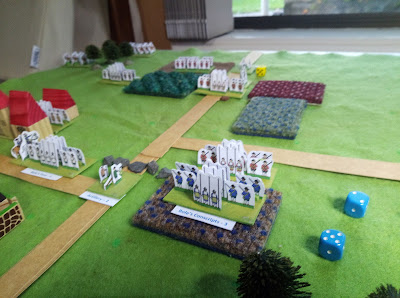 The Royalists held off the first Parliamentarian attack, inflicting a few hits, but then rolled poorly for activations, allowing Parliament to regroup. 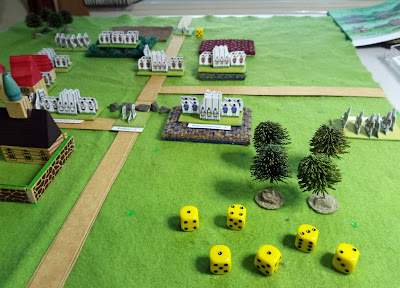 On the Parliamentarian right their horse attacked the Royalist horse, whilst their Kentish foot assaulted Bole's conscripts in the village. 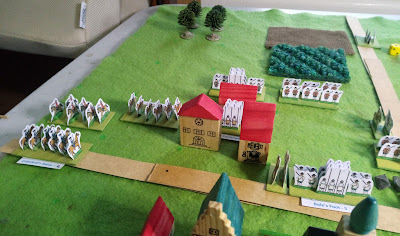 In the centre the Royalist artillery was just about holding on against the enemy advance, although its earthworks would not protect it for long. 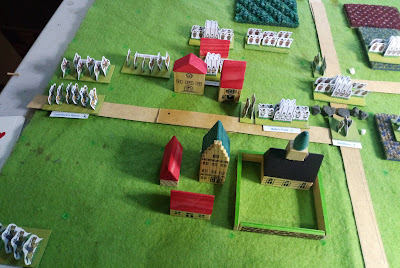 The artillery was driven away, and the advancing Parliamentarian foot swung into the flank of Bole's Foot. 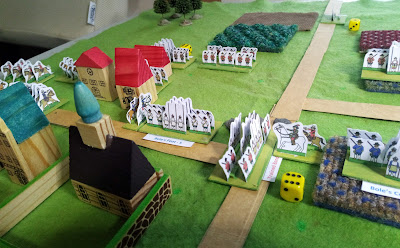 The fighting fell back into Alton itself. 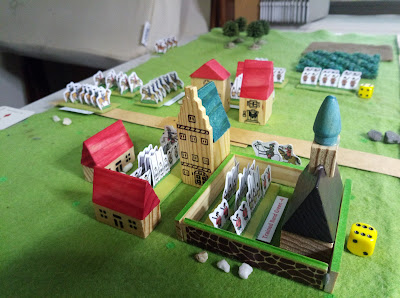 Meanwhile the conscripts were fighting furiously in their enclosures, attacked by enemy foot to the front and horse to their rear. Despite that, they prevailed. 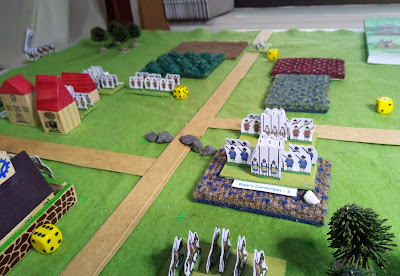 On the Royalist left their horse defeated the Parliamentarian horse. 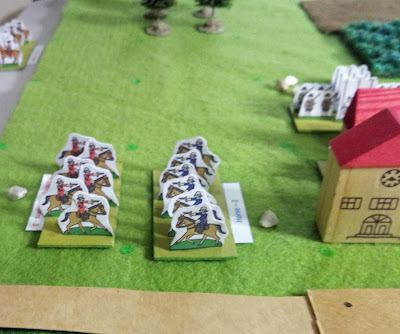 Fierce fighting in the streets of Alton. By  now the Royalists had taken enough hits that they had to test morale at the start of each turn. But they held.

On the turn after this photos the two units fighting in the village destroyed each other. This pushed Parliament to their breakpoint. 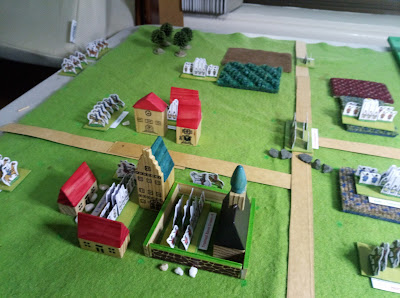 Royalist morale held on the next turn, and their horse attacked the right flank of the Parliamentarian foot. Parliament failed their first morale test, and withdrew their remaining forces. The Royalists still held Alton. 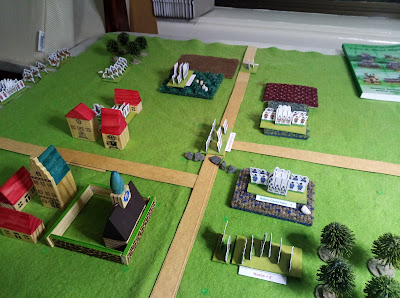 So what of the activation system. Well, in principle it worked; the game cracked along and I was happy with the casualty rate.. I felt, however, that the 'wildcard' sixes were too much effort for the gain you got from them.

I set up a second game (unphotographed), and this time treated a roll of '6' as a normal activation. This actually flowed much better. Having to activate your units in a set sequence does create a few restrictions, which I felt was good, and having to decide in advance which units you're going to assign the score of '1' to was an interesting exercise.

I'm tempted to even consider rolls of '1' or '2' as a failed activation, but to either add in a dice for the commander or simply assume that if he's active he generates a free activation - for example if you have six units you will get one activation plus 6D6 rolls worth. I'll have to set up some more games and see how that plays out; I think it will offer a nice compromise between 'nearly everything acts' and 'About half your force acts', with the commander activation helping smaller forces (since the free activation is worth more). Plus work out how to run random events.
Posted by Kaptain Kobold at 09:06