We're still in lockdown here, so boardgames are still proving a popular diversion. Yesterday evening Catherine and I had a go at a new purchase - 'Godzilla: Tokyo Clash'. I've fancied a giant monster boardgame for a while, but I've never been that excited by what I've read of those available. The reviews for this one, however, suggested that it was exactly what I wanted and I wasn't disappointed. 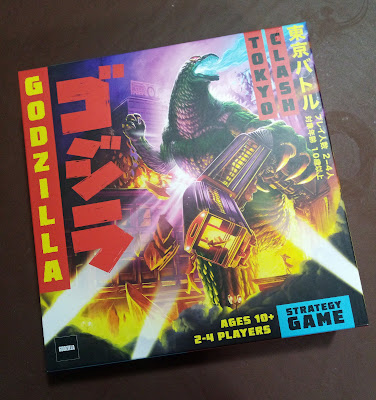 The game is rooted firmly in the classic Showa era of Godzilla movies - 1954-1974 - and teh choice of the four monsters in the game reflects that . Obviously you get Godzilla, and Ghidorah was included as his most important foe. Mothra made the cut as the best example of a 'good' monster, and for the fourth monster the designers went for Megalon, as they were aiming for something that was distinct from the otehr choices as far as possible. The game has these gorgeous figures, which are about 2 1/2" tall. 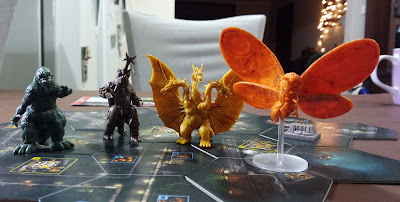 It's designed for 2-4 players, and each player plays one of the monsters. The aim, obviously, is to bash the other monsters and gain the most points by the end of the game. Play is card-driven. Each monster has their own unique deck of cards, and these cards control their attack, defence and move options. Obviously the key to playing well is to understand how the cards in your monster's deck work together. Godzilla, for example, has a number of decent ranged attacks, and has cards that can be used to boost them as well, so his aim is to get these enhancements into play, build up plenty of energy and unleash that heat-ray. Megalon is based around speed; his attacks are less powerful but he can use card combinations and a deck-management special ability to make more of them.

The suggested two-player starter is Godzilla vs Megalon. Mothra and Ghidorah both have abilities that require a little more understanding of how the game works, although they aren't overly complicated. Anyway, that's the pairing we set up; Catherine took Godzilla, whilst I took Megalon. The board is modular, and features large buildings, which have models, and small buildings, which are just counters. At the start of each game you select two event cards, which are in play throughout. These add vehicles or other tokens to the board which can help or hinder the monsters. In our game we had trains (which can be destroyed to gain energy) and tanks (which home in on monsters and damage them). 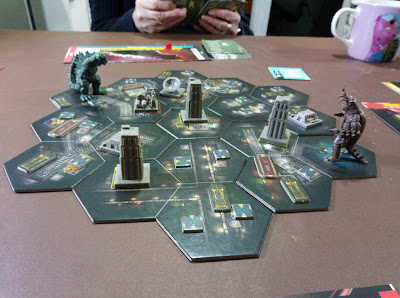 Energy is the key to the game. Kaiju can throw vehicles, or other kaiju, to destroy buildings or other vehicles, and doing so gives them energy. Each card you play has an energy cost, so there's a constant competition for the energy resources on the board. Vehicles respawn throughout the game, so are always available, but the best energy sources are buildings, and once they're gone, they're gone. There are always plenty of small buildings to destroy, but there's a downside to doing that which I will cover later.
With energy you can launch attacks on other kaiju. Here you can see Godzilla unleasing his fearsome Mega Heat Ray on Megalon. Attacks have a damage value, and may be partially or fully blocked by playing defence cards which have a corresponding defence value. The difference is the amount of damage the target monster takes. Damage is rather neat. For each point of damage you inflict you draw one card from your opponent's deck.  Each card has a Dominance Value from 0-3, and you take the card with the highest Dominance as a trophy, placing it face-down in a victory pile, putting the rest in teh discard pile. However you can't take cards with a Dominance of 0, so no matter how much damage your kaiju takes you will always have some cards left to play (and often you will have quite decent cards with a Dominance of 0). This nicely reflects a monster being worn down by a series of attacks, and becoming less effective, but in games with three or more players it also means that picking on one kaiju isn't always a valid strategy, since eventually cards with a good Dominance score will be harder to draw from their deck. In addition to this, since your trophy pile is face-down, the players have no idea exactly how many victory points an opponent has; all you can see is how many cards they've taken. 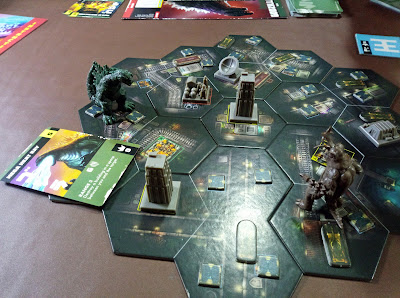 Attacks can be ranged or close combat. Megalon retaliated against Godzilla's ranged attack by rushing in and using a series of card combinations to inflict multiple small hits on Godzilla. The turn sequence is normally that kaiju alternate playing one card each, but some cards have what is called Momentum, which allows you to play them and immediately play another card. If that second one has Momentum, then you can play a third. Megalon has a lot of Momentum abilities, although they burn through energy. 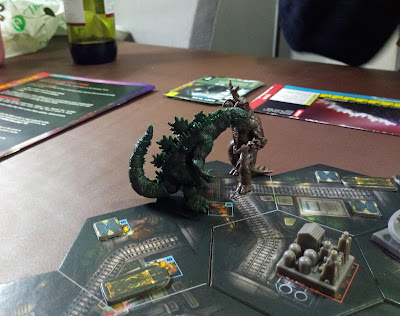 Close combat attacks can be used to throw other kaiju. Here Godzilla has thrown Megalon into a skyscraper, which will give Godzilla a nice haul of energy. 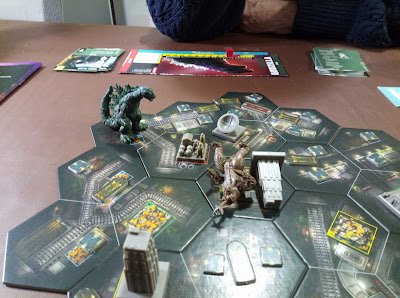 You can see how, as the game progressed, the buildings are lost. There were still plenty of tanks in play at his stage, and thanks to Megalon's mobility I was able to keep away from them so that they focused on Godzilla. 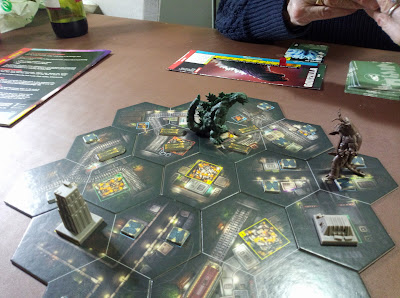 And that's what happened here - the marker moves at the start of the turn, so you always play the last turn. 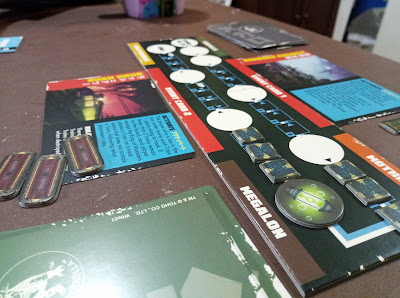 And it was an exciting turn. We started in the centre of the board. Catherine had taken a large pile of trophy cards from me, and was also King of the Monsters. This is a token which is assigned at random at the start of the game, and which grants you and extra card in your hand, as well as being worth 2VP at the end of the game. Its downside is that events which attack kaiju use the King of the Monsters as a tie-break if there's a choice, so you tend to attract attention. If you damage the kaiju with the King of the Monsters token, then you take it from them.

And that's how the last turn panned out, We both spent the early part grabbing what little energy there was left, and engaged in some brief close combat. I backed off, having no energy left. Catherine launched one of Godzilla's heat ray attacks, and inflicted damage on me. However I blocked some of the damage with a deflection move which allowed me to destroy a nearby building. And that gave me enough energy to retaliate with a ranged attack of my own. I damaged Godzilla, and took the King of the Monsters token from him. 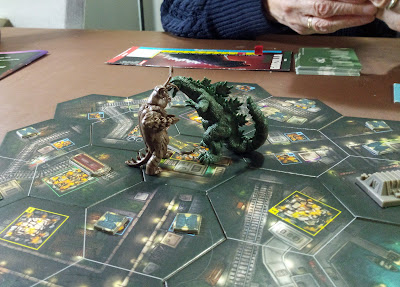 We totalled up the points, and found that we had scored exactly the same on trophies - Catherine's big pile was all low-value cards, whilst I had a few 3s in mine. However because I had the King of the Monsters token I got the extra 2VP needed to claim the game.
We thoroughly enjoyed this game, and will look at trying the other two monsters sometime soon to see how they function. Then we need to rope Maya in for a three-player game.

Anyway, if you like giant monsters, and especially if you like your classic Godzilla, this is a game for you.
Posted by Kaptain Kobold at 10:17