Catherine, Maya and I gave 'Godzilla: Tokyo Clash' another outing yesterday evening; a chance to try it with three monsters. Catherine and I took Mothra and Ghidorah respectively, whilst Maya took Godzilla. 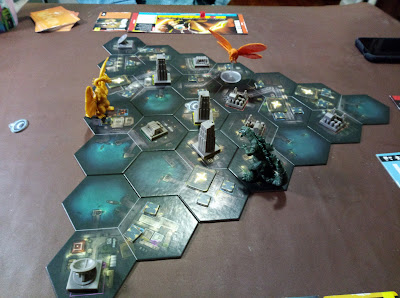 It was great fun with three. You get a larger board and, obviously, 100% more targets for your attacks. Catherine got Mothra straight into the action, inflicting hits on Ghidorah. I built up a suitably dramatic retaliation. Ghidorah gets to progressively charge up his three heads and, once all three are active, can launch some really meaty attacks (before having to charge the heads again). I got to launch a meaty attack at Mothra, and drew an appalling hand for trophies, scoring nothing. Twice. 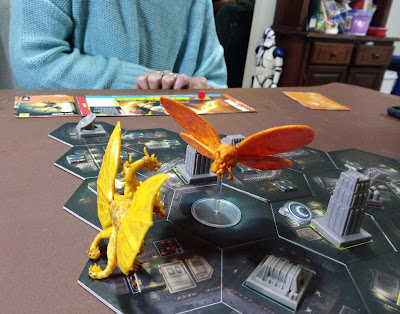 Anyway we crashed around the city attacking each other. Catherine had a nice pile of victory points, whilst Maya and I seemed to be doing less well. Here we can see Godzilla launching his Mega Heat Ray into the back of Ghidorah. Thanks Maya. 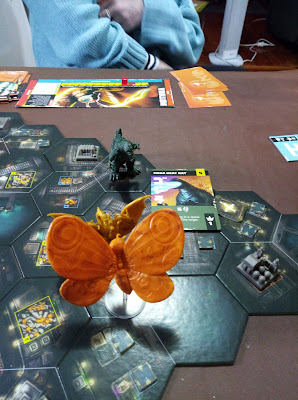 Anyway, on the last turn I got to throw Mothra into Godzilla, and claim the King of the Monsters token. Which was satisfying. 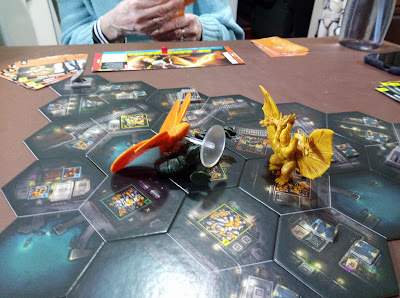 The final victory totals were less so. Even with King of the Monsters I came last. Godzilla did slightly better. But Catherine got a convincing with with Mothra. We all had a lot of fun, though, and Ghidorah was interesting to play. I think I was very unlucky with my victory point draws for my powerful attacks, and could have done better, but that's how things pan out sometimes.