Over the past couple of days Catherine and I finished off our twelve-stage Flamme Rouge Tour.

Stages 9, 10 and 11 all feature fewer (or no) ascents/descents and a lot of cobblestone sections. These are narrower (which causes blocking) and prevent slipstreaming (which can cause exhaustion). So a new challenge for our riders. 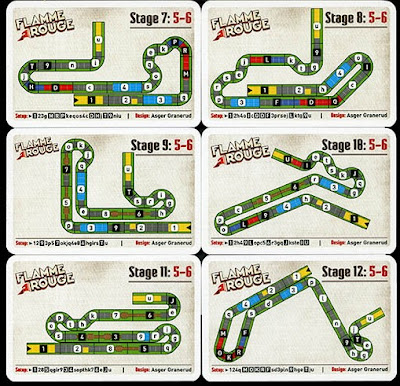 Stage Nine has two long sections of cobblestones, but no slopes. Seeing it as a straight flat race, both Catherine and I hung back, hoping to slipstream in the early stages and then cruise through the pack to victory. 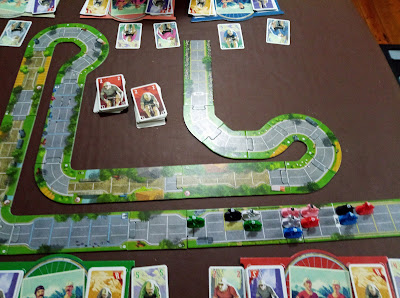 OK. I did. Catherine pushed to the front. 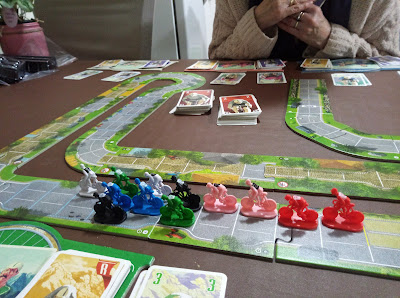 I realised the error of my plan on the first cobblestone section, as the pack bunched up and we started to get blocked. 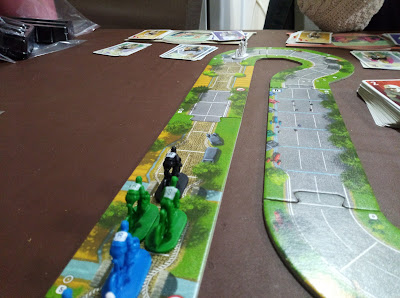 Basically I was playing decent cards trying to break through the pack, but not getting their full benefit, nor changing position much. 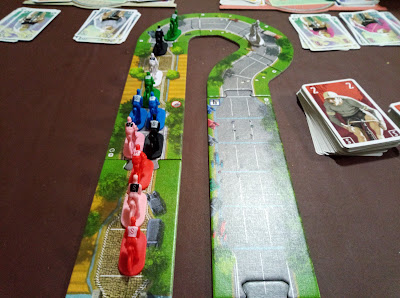 As we approached the second stretch, I was at the back and Catherine wasn't doing much better. 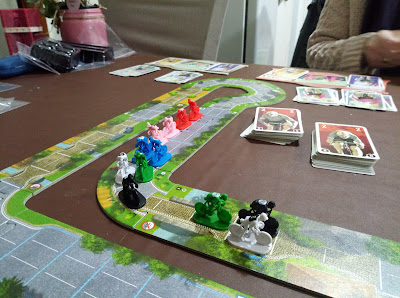 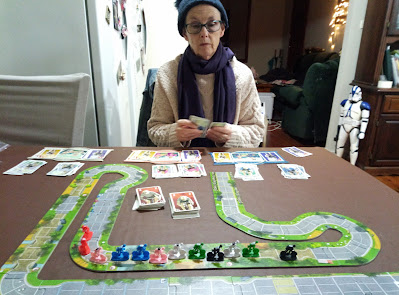 There was a final flat run to the finish, but we were both badly positioned to make use of it. 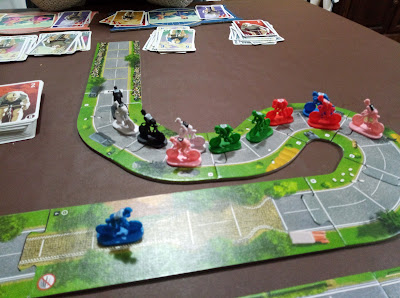 The 'bot teams got the top spots. 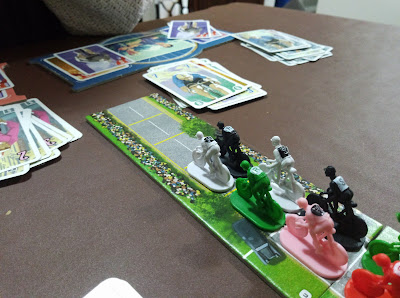 Catherine and I finished in the bottom half. 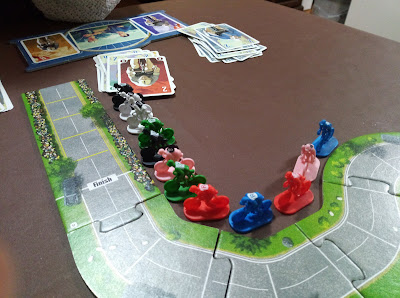 Stage Ten had a couple of ascents and a single long stretch of cobblestones. We hoped this would be easier. 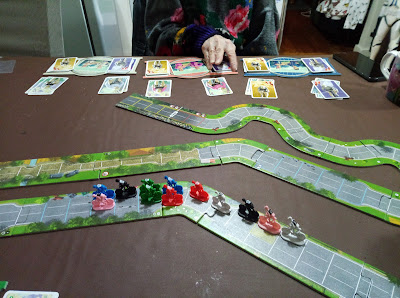 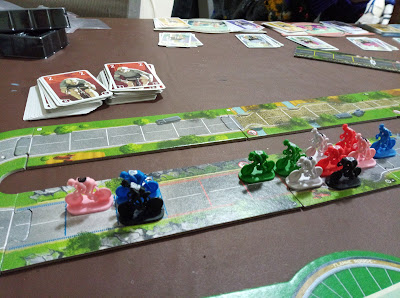 ... which meant we were badly placed for the cobblestone section, and got blocked and slowed again. 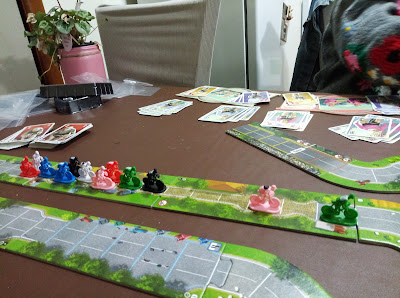 Once again we found ourselves at the back of the pack on the run to the finish. 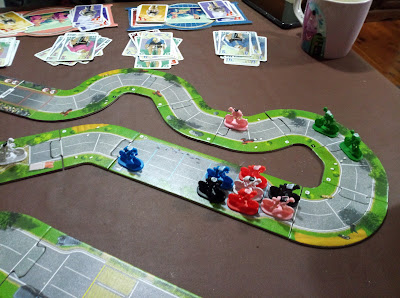 A small ascent before teh finish line caused the pack to bunch up again. 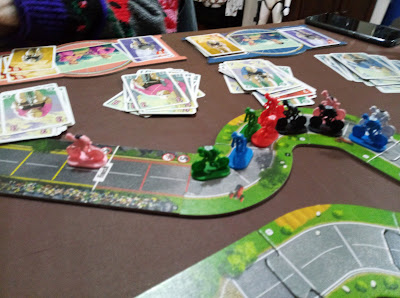 Catherine and I finished a little better this time, but my lead was eroding and Catherine was now in fourth place. 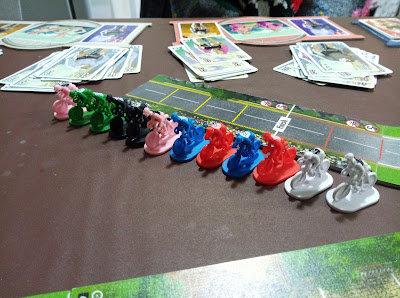 Stage Eleven was now not one we were looking forward to, with three sections of  cobblestones and virtually no boost squares at all. 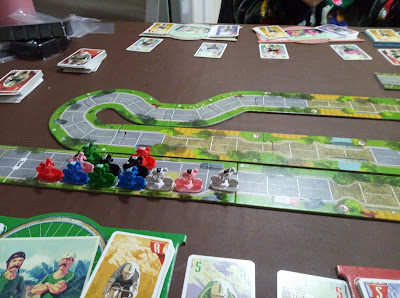 Early breakaways. But this time we were closer to the front of the main pack going through the first cobblestone section. 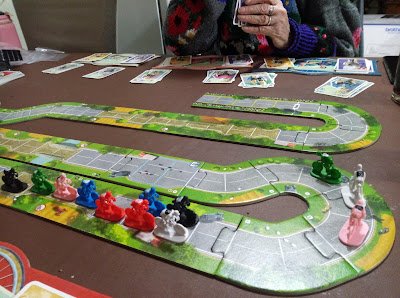 It didn't help. We still got blocked going into the second section, and lost ground. 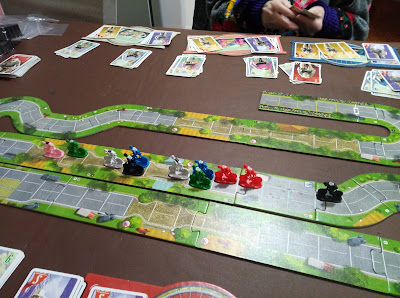 The riders broke up some more. Catherine managed to have one of hers in the front group. 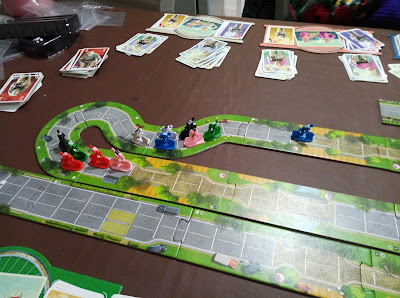 And she exploited her advantage, forging ahead for ... 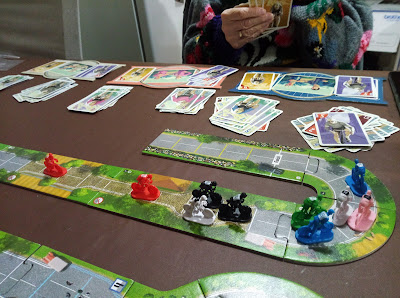 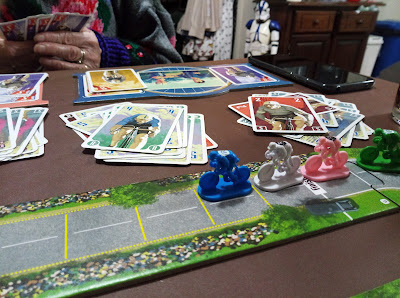 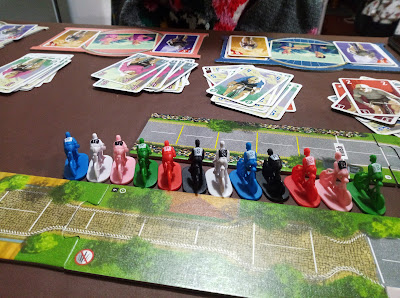 This put Catherine into third place going into the final stage. My lead had eroded, but so long as I didn't do really badly I would still win.

Stage Twelve had one long ascent followed by a long flat to the finish. It looked pretty easy. 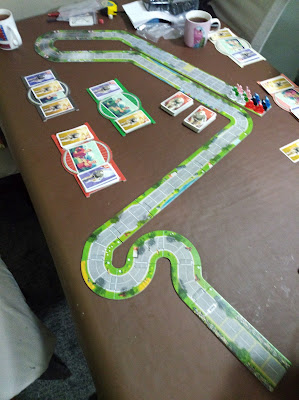 Some bunching at the foot of the ascent cost both of us some energy. 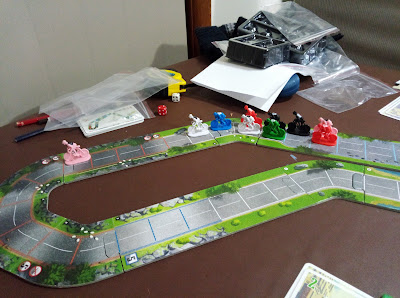 The short descent saw Catherine pushing a rider ahead. 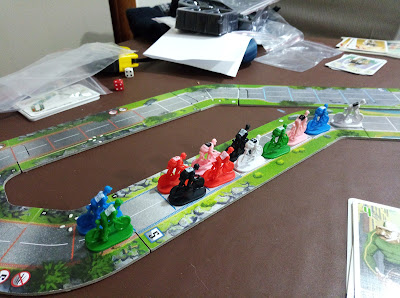 The flat section saw lots of riding, but few slipstreaming opportunities, which meant that all of the riders were burning through their decks. 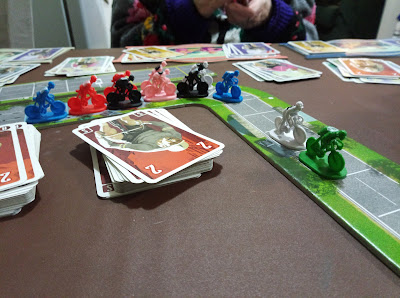 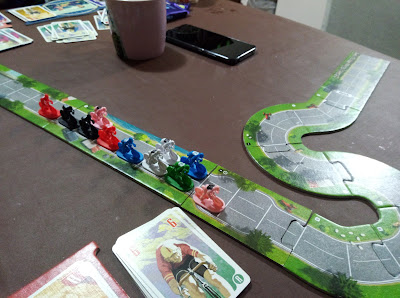 Catherine broke away again, whilst I somehow ended up stuck in the main pack. 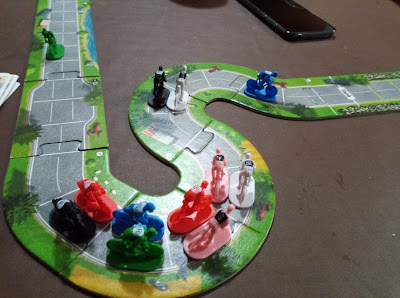 A second consecutive win for Catherine! But I picked up a third place which was enough to maintain my overall lead. 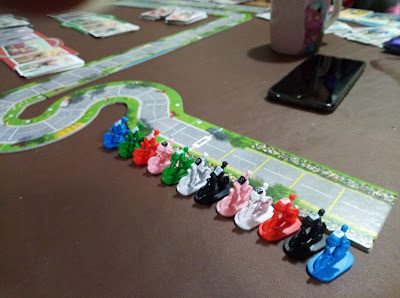 So it was actually fairly close.

This was a lot of fun to play, even if the 'bot teams are somewhat random. Maybe we need a third player for that extra challenge.
Posted by Kaptain Kobold at 11:54