I've played through 'Fast & Furious - Highway Heist' a few times now, running a couple of drivers and playing both the basic tank scenario and the intermediate truck heist one. I've had varying levels of success - I've beaten the tank a couple of times, but have yet to successfully rob the truck, even on the easiest mode.
Last night we played it as a proper cooperative game for the first time, with Catherine, Maya and myself running a driver each. We all picked drivers and cars that looked fun, and hoped the combination would be enough to take down the tank.
I ran Letty in the Exotic Supercar
Maya ran Han in the American Muscle car
Catherine ran Tej in the Import Racer
Here we are, ready to go. 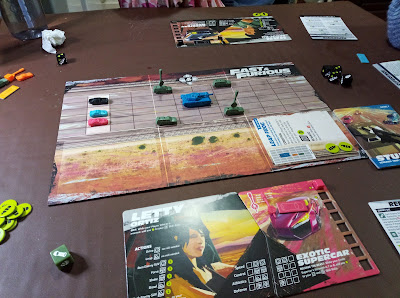 The other two picked up the game very quickly, and we were soon setting up moves for each other like pros. Catherine and I zipped ahead and started wrecking enemy SUVs  in front of the tank, whilst Maya used Han's abilities and those of the Muscle Car to drive the SUVs behind the tank in our direction. 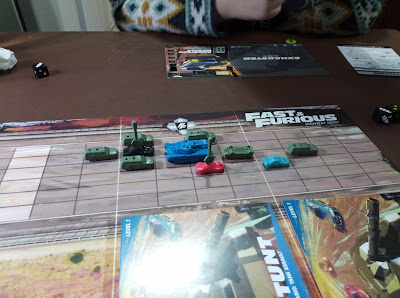 Unfortunately Maya got boxed in by the tank and some enemy vehicles, and ended up wrecked. You can see Han's black driver peg on the SUV in the centre of the picture. 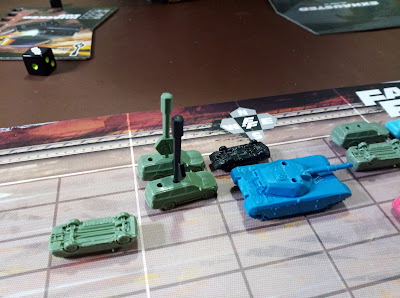 We'd done a decent amount of damage to the tank by now, but they sent out someone to repair it, so Letty had to leave her vehicle to deal with him. That's her pink peg on the tank. Meanwhile an enemy goon was on her car.

To the front-left of the tank you can see an SUV with a black marker underneath it. That's Han, who hijacked himself a new vehicle. You can do that. 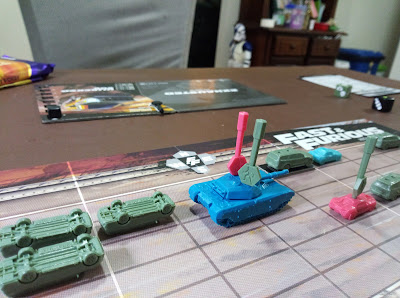 Tank Repair Man was no match for Letty, so the tank remained thoroughly damaged. More so when Han sacrificed his new car in a stunt that saw it go under the tracks and inflict another hit on the tank. 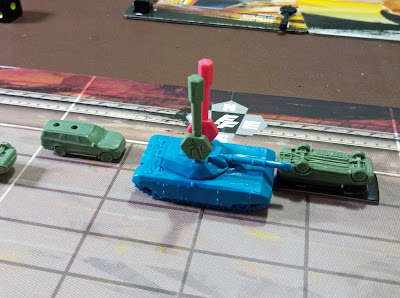 Our stunt options now included hijacking enemy SUVs and causing them to flip into the tank. Letty did this once, putting the tank on its last hit. As she did so her supercar was wrecked by an enemy driver. Then Catherine sent Tej in to do the same. He can take an extra action in his turn three time during the game, and this was a perfect us of it, as he zipped back behind the tank, leapt onto an enemy vehicle and then flipped it into the tank to give us the win. 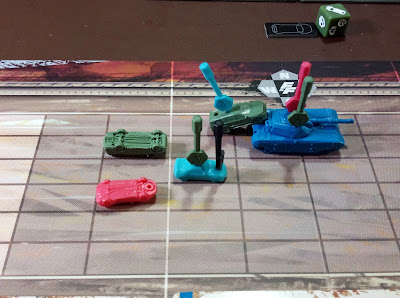 We were playing this on the easiest possible setting. You can make scenarios harder by removing cards from the stunt deck which firstly limits some of your options (you have no idea if that killer stunt you relied on in the last game is in this one), but also reduces the number of turns you have available, since the stunt-deck determines the length of the game as well. Next time we'll play the standard difficulty level.
Posted by Kaptain Kobold at 11:44