Catherine and I tried another race-themed boardgame this afternoon. Swapping bicycle for yachts we played 'Spinnaker'*, a game which appears to have been produced here in Australia around 1980**. Maya found a copy of it in the charity shop they volunteer in, and bought it for me for the princely sum of $3.

Of course it has the vital selling-point of nice plastic pieces; in this case little yachts, with detachable spinnakers. Sadly my copy of the game is missing spinnakers for two of the yachts, but they should be easy to make from craft-paper. 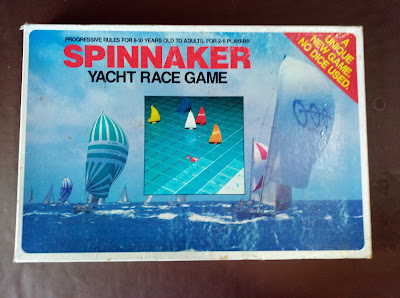 The start of our game was delayed by a big black cloud in the shape of a cat. Mr Wednesday is a big boy, but easily persuaded to move. 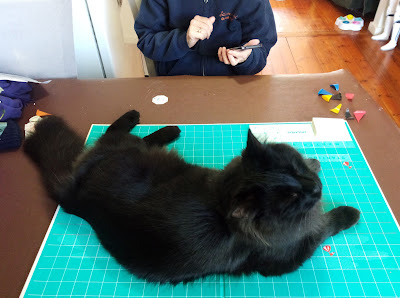 We played one game with a yacht each to get used to the movement, before playing a second race with two yachts apiece.
The aim of the game is to do one or two circuits of the board, heading clockwise around three buoys, before looping back around the first one again and then heading for the finish-line.

The board is a square-grid, and yachts can move orthogonally or diagonally. Movement is determined by the wind direction, obviously. Winds can be light (offering 1 or 2 movement points) or strong (offering 1-4 movement points). A yacht must move in a straight line based on its facing at the start of the turn, but can use a movement point to change facing to any direction at the end of its move. You can opt to spend points to raise the spinnaker, which doubles your movement points, although the spinnaker must be lowered in certain wind aspects. Here's the four yachts in our second game all heading west with spinnakers deployed.
Changes of wind direction are controlled by a deck of cards. At the start of  their move a player may decide to check for a change, drawing a card. This could indicate no change, or will have a new setting and strength, which will then affect all players on the board until one of them manages to change it. Most cards, even the No Change ones, offer some kind of movement bonus or penalty for the person who drew it 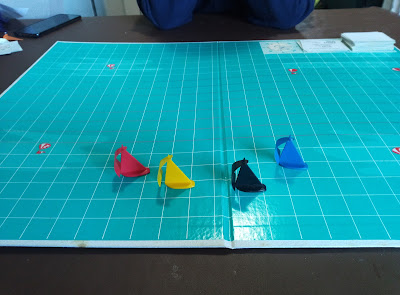 As you can imagine, it may be possible to get a wind setting that benefits all players equally for several turns, but eventually one player will need to move in a direction requiring a wind that is not favourable to others. And that's where the fun of the game comes in. This picture was taken towards the end of our race - Red has rounded the final buoy and is heading for the finish line, but the other three yachts are still trying to round the buoy, so need a different wind. There were a lot of cards being drawn, and the final stages were chaos. 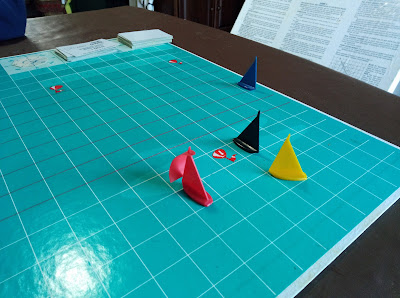 A zone across the middle of the board is prone to gales, which can blow yachts off course. You can see that in this picture, where Red has shifted a long way to the right. 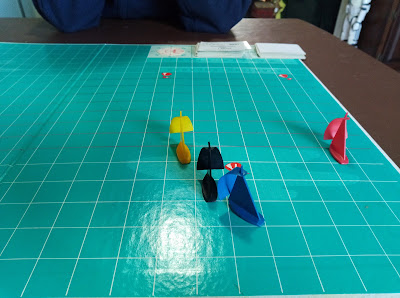 Red  (one of my yachts) crossed the line first. The others finished way behind; a shift of wind saw them blown by a gale away from the finish, and it took several turns for us to work our way back towards it. 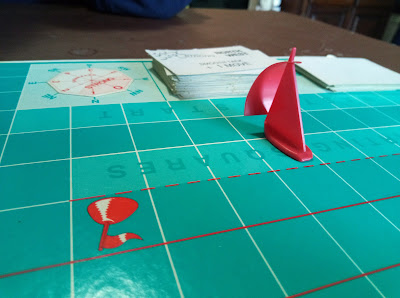 Spinnaker is set up with three levels of rules - the simple Novice version just covers basic movement, the Advanced game adds the spinnaker, wind strength and the gale zone and teh Master level introduces a more realistic start and more flexible movement where the yacht can make its single turn at any point during its move. We played the Advanced game, but I think with that under our belt the Master level won't prove too troublesome.

Anyway, we enjoyed this game, and will probably get it out again.

* According to BGG, there are two games called 'Spinnaker'. This is not the 1985 version from Overlay Games.

** There's a small note on the box saying that if you have any questions about the rules to send a stamped, addressed envelope to a particular residential address. It's actually less than ten minutes from my house. But I suspect that after 40 years the unnamed designer has long gone.