Sometimes you come across games completely at random, and this is an example. I stumbled across a positive review of 'Fast & Furious - Highway Heist' on Twitter, and liked what I saw, so I decided to get myself a copy. After all, we're in lockdown, so I needed some retail therapy, and it's a cooperative game so can be played with the family or played solo.

I should say that my knowledge of the film franchise on which this game is based is limited. I've only ever seen the first two, but know that they get more an more ridiculous in terms of stunts as the series progresses. But a game will little plastic cars being driven in an insane manner is already well on its way to being a winner in my book. 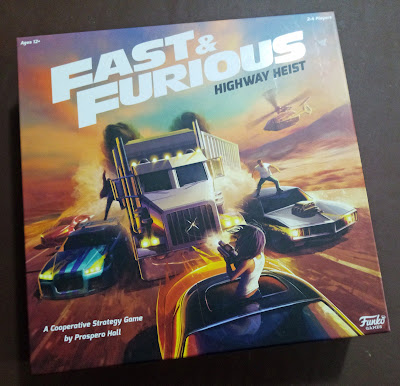 I read through the rules at lunchtime and got all the components out and checked. Then last night I set up a game.

The game has three scenarios. The basic one involves destroying a tank. The second involves robbing a moving truck. And the third involves taking on a helicopter and an armoured sports-car whilst keeping a hacker alive. Each is progressively more difficult to play, and you can set a level of difficulty within each scenario by limiting how many stunts your team has available.
The game is designed for 2-4 players, each playing one character. Obviously a solo player can play them all; there's no hidden information. There are six characters in the game, three of which I recognise from the first two films and three I have no idea about. Each has their own set of skills and abilities. In addition there are four cars they can drive, and each car has its own unique abilities too. So you select a character card, select one of the vehicles for them, slot them together and away you go.

For my first game I chose Dom and Brian. Dom was driving the American Muscle car, whilst Brian was behind teh wheel of an Import Racer. The former is tough and good at ramming, but lacks control, whilst the other is a nice balance of control and speed, but weak defensively. Obviously I played the basic tank scenario, on the Easy setting. You can see the setup here. My two cars are at the left - the black and blue ones, whilst the big tank is surrounded by the Enemy SUVs, which are controlled by the game system. 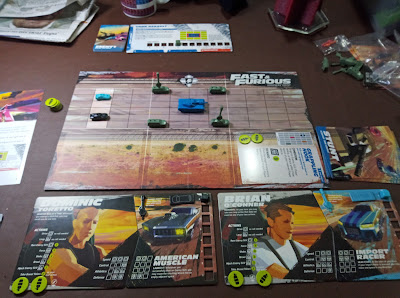 Since you're wondering, these are the other vehicles - the truck, helicopter and sports car for the other scenarios, plus the four player vehicles. The enemy vehicles are rather nice. The player vehicles I feel are a bit indistinct. The holes in them are to allow crew pegs to be inserted for when people end up on top of the vehicles. 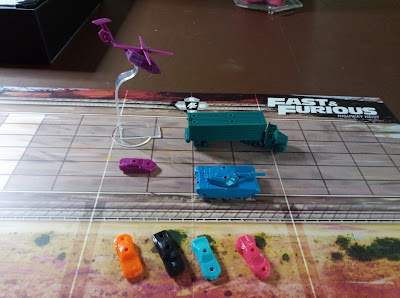 And away we go! The tank can't be attacked directly, but each time it hits, or is hit by, a wreck it takes damage. So the aim of this scenario is to lob enemy vehicles at the tank until it's destroyed. Dom started off well, zooming up and wrecking an enemy SUV ... 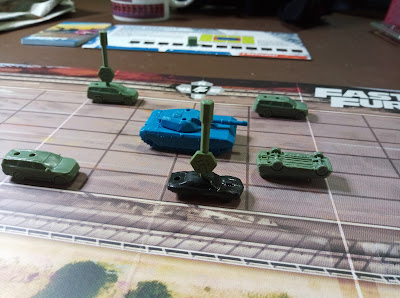 ... then flipping the wreck into the path of the tank.

The game assumes that everything is moving along the road from left to right, so movement is in addition to that. At the end of each full turn, all of the wrecks are moved to the left, representing the action leaving them behind, but any vehicle in the path of a moving wreck is destroyed (or damaged, if it's the tank).

The tank obligingly moved across into the path of the wreck, which was lucky. The game has a sequence where one player acts, then the enemy gets a turn.

Each player gets two actions. Aside from movement and leaping (see later) these require a skill-roll, so certain character/car combinations are better at certain actions than others. For example, in Dom's first turn he did a move (no skill roll required), then rammed an SUV (skill roll). The Muscle Car has the ability to push a wreck it causes into an adjacent space, so that allowed Dom to drop it in front of the tank. 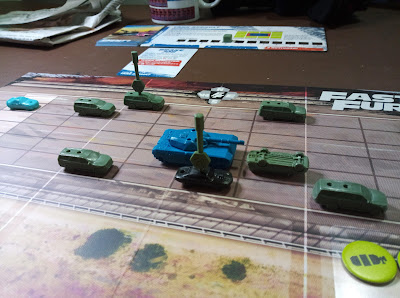 Brian then acted, setting up another SUV to be wrecked in front of the tank. The enemy reaction saw more SUVs placed to the rear of the tank. 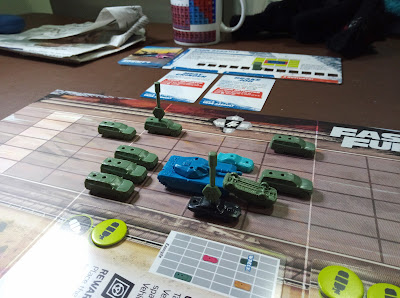 And so it continued. Along the bottom of the road you can just see the stunt cards. These are specific to each scenario, and are special actions the players can choose to perform. A new stunt is fed onto the board at the end of each turn, but each only stays in play for three turns, before being moved off the other end.  when the stunt deck is used up the game ends.

Anyway, Brian did a great job using a Grappling Hook stunt to pull SUVs into the path of the tank, but fell foul of some attacks and lost his car. A player can't be knocked out of the game, though. When their vehicle is wrecked, they leap out onto the nearest vehicle, friend or enemy. You can see Brain's blue peg on the tank. 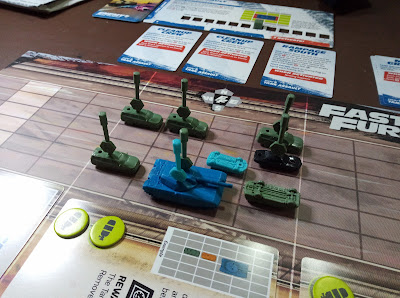 And from there? Well, characters can leap from vehicle to vehicle (indeed Brain's special ability is that he can do that for free once each turn), and they also have an action where they can hijack an enemy SUV and take it over. Which is what has happened here - you can see the blue marker under the enemy vehicle showing that it's now being driven by Brian. 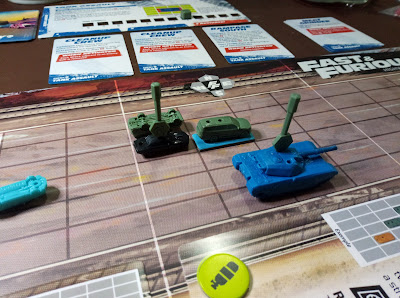 And here's move extra-vehicular movement in action; one of the stunts allows a character on and enemy vehicle to flip it into the tank, scoring damage on it. It plays to Brian's strength, so I used it twice; Brian leaped from his captured vehicle (which carries on moving forward without him), flipped an SUV into the tank, and then jumped onto another which he flipped the next turn. He then leaped back to his own vehicle.

This game is insane. But so much fun. 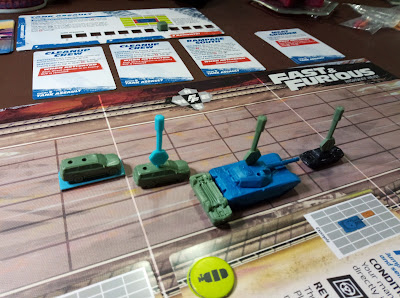 Anyway, Brian was doing a grand job, but the Dom/Muscle Car combo didn't prove as useful as I'd hoped. It's great for ramming enemy vehicles, but not great for getting them into a position where the wrecks will affect the tank.

The final stunt hit the board. In each scenario this is a tricky one, but offers a way to win instantly if it is successfully completed. I managed to fulfil the conditions, but missed the skill roll required by one, and failed to wreck the tank. After that I couldn't get into position to do it again, and the game timed out. I'd lost; I'd inflicted five hits on the tank, needing eight to destroy it. 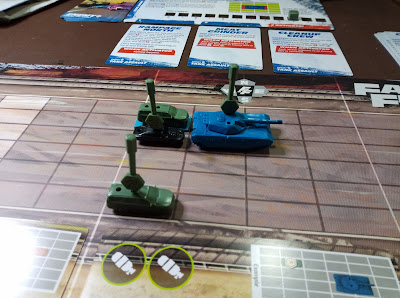 There's a few basic mechanisms I haven't covered, but I hope that this post gives you the gist of the game. It was a lot of fun to play, and I thought that the components were well-designed to make play as easy as possible too. The rules were clear too; I only encountered one thing where I will need to go back and read them through in detail again. The rules are also pretty simple, so it's a fairly easy game to play, but actually working out the best way to achieve your goal is quite tricky, and will obviously vary depending on what character and car combinations you choose. Anyway, it's daft and it's fun, and I will get that tank!
Posted by Kaptain Kobold at 11:27