It's been a very long time since I played Giant Monster Rampage. A few years ago I gave Mighty Monsters a try, and that's been my go-to game since then. But as is always the way with these things, both sets of rules have their good points and their bad points, and after my experiments of the other day I thought I might try Giant Monster Rampage again.

I spent Monday evening re-reading it. Whilst not complicated, it is one of those 'toolkit' games with lots of optional rules dotted through the text. And, as I always do with these things, I have house-ruled it to death, so I had to find my notes on those as well.
Anyway, last night I felt confident enough to give it another try. I've done Kong vs Godzilla before, but always with Lego minifigures, so this was a great chance to do it with 'proper' miniatures. I also gave the Attacker/Defender scoring system I was playing around with a few (six) years ago another try.
I set up a city, and plonked down Godzilla as a proper attacker. He gets points for wounding other monsters and destroying buildings.
I ran Kong as a Neutral Defender. He's not out to destroy the city - he's just there to fight other monsters. So technically he's defending the city but isn't worried if chunks of it get destroyed. He gets a bonus for knocking out Godzilla. 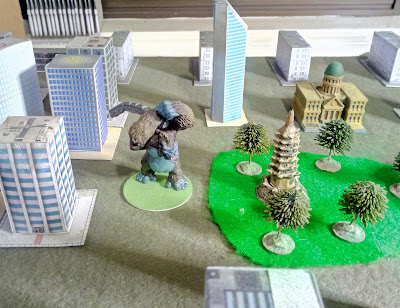 Godzilla had already started destroying the city before Kong came in sight. Kong ripped out trees from the park and threw them at the big lizard. 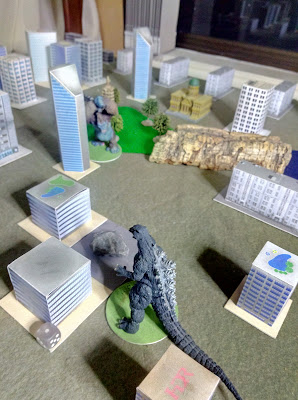 Godzilla threw rubble back. He couldn't generate enough energy to use his heat blast, though. 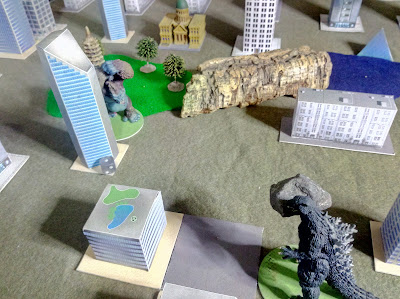 Kong rushed into the attack, using chunks of a destroyed skyscraper as an improvised weapon. 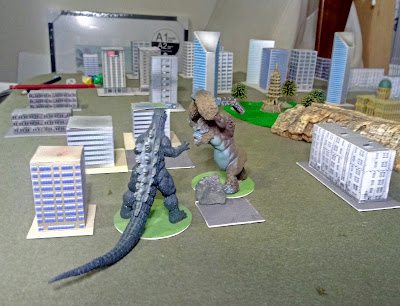 He got lucky with his hits, hammering Godzilla hard, and driving him back (he scored two critical hits with two consecutive attacks, which really stacks up the damage). 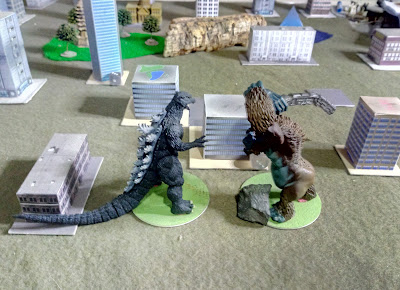 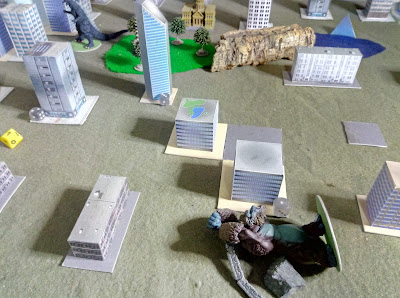 Whilst the giant ape got to his feet, Godzilla took the opportunity to retreat to another part of the city and begin destroying that. If he could tot up a large score of building destruction points then he could win even if Kong knocked him out. 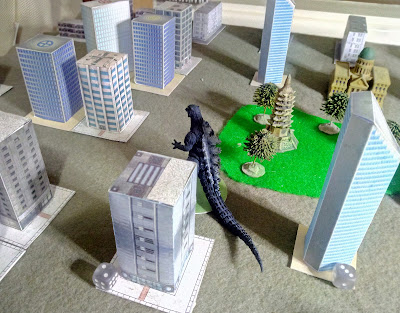 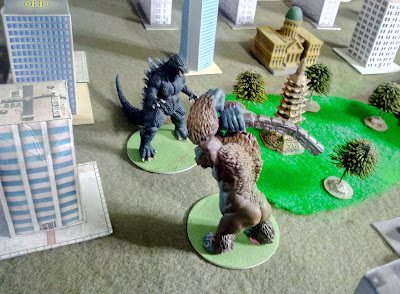 ... and smashed Godzilla to the ground, defeating him. 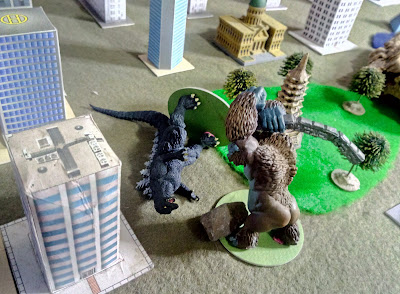 Godzilla scored 9 points, mostly for destroyed and damaged buildings. Kong scored 16 points - 11 for wounding Godzilla and a 5 point bonus for the KO. So had Godzilla been more destructive early on the scores would have been very close. 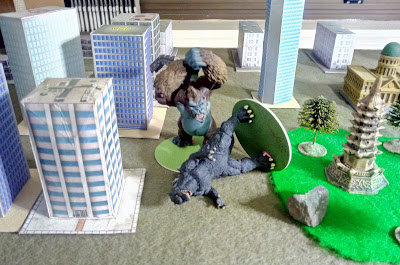 For my next game I will run both Kong and Godzilla as attackers, and add in a proper defender and see how the points work there.
Posted by Kaptain Kobold at 09:46