Godzilla vs Kong - With Added Jaeger

I ran the Giant Monster Rampage setup again yesterday, but with both Godzilla and Kong as attackers, and adding in the jaeger Cherno Alpha as a defender. Cherno Alpha would score points only for damaging Kong and/or Godzilla, plus a bonus based on how destructive they'd been for knocking either out. 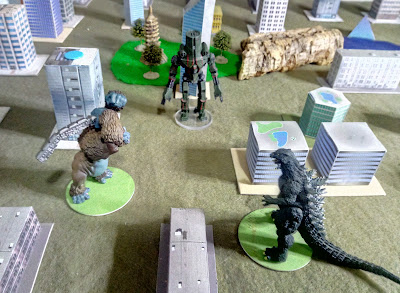 The two monsters set to work demolishing the city as fast as they could, whilst Cherno Alpha plodded into action. It went after Kong. 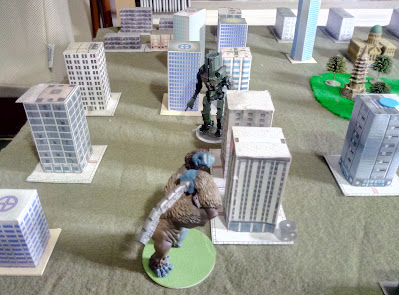 The two exchanged blows. They're fairly evenly matched, with Kong having an edge on speed but the mech being tougher. Cherno Alpha also has some nasty surprises attached to its punches, being able to charge them up for extra damage. 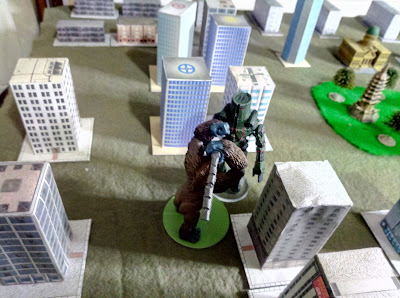 Meanwhile Godzilla demolished buildings, but edged over to where the fight was as well; if one of the others gained a a serious point score Godzilla needed to be ready to take them down. 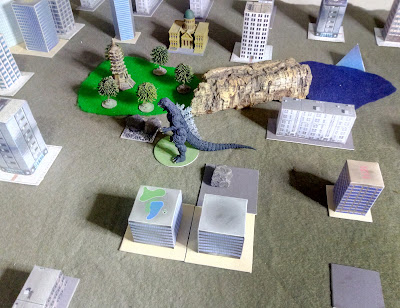 Kong was actually making so little impression on Cherno Alpha that a retreat was called for so that he could concentrate on smashing buildings. But Cherno Alpha pursued - slowly - and the fight continued. 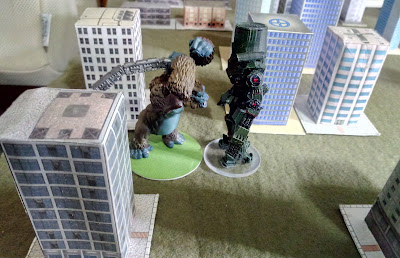 However Godzilla was building up a good score, so Cherno Alpha switched its attention to him. 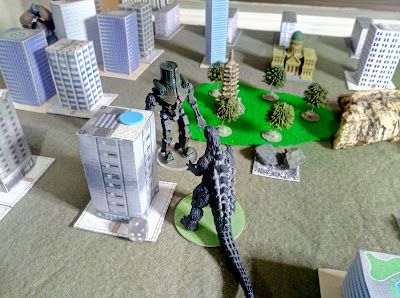 Kong was now making heavy weather of some skyscrapers and not really doing much to improve his score. Godzilla retreated and continued to destroy buildings. 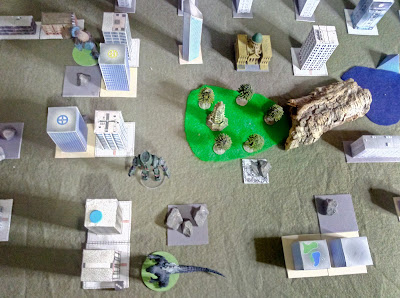 Cherno Alpha had now taken a reasonable amount of damage, but was dishing it out in return. However he still needed a KO for a winning score, and that was proving elusive. 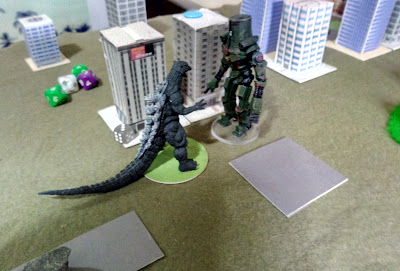 Eight turns into the twelve turn game I got called away, and had to abandon it, although to be fair my tired brain was struggling to manage the three monsters anyway. Godzilla and Kong were about even on points, with Cherno Alpha well behind.

The issue here really was that with two attackers the poor defender is forced to concentrate on one whilst giving the other free reign. I guess that with a player per monster, though, the two attackers would be watching each others' scores closely and would switch to fighting each other to prevent the other monster winning. But maybe not - doubling down and destroying as much property as possible would also work. Cherno Alpha was actually a tricky foe as a defender in some ways. The two attackers could fight it, but in fact it has a high toughness, so is hard to damage. Can a monster afford to spend time and energy doing that for a lower points reward than buildings would give? Or are you better off  concentrating on the buildings and simply hoping the Cherno Alpha doesn't damage you too much. There's always a decision to be made in a Giant Monster Rampage.
Posted by Kaptain Kobold at 17:49