Yesterday we headed into town to play an interesting detective game - The Wollongong Ripper. Basically it was a scavenger hunt run across the city-centre, and managed by an app we all installed on our phones. Teams or up to six people set out to solve the mystery of a serial killer targetting police officers.

We were encouraged to dress up. So we did. We lost two team members to illness, so could only manage four of the six Cluedo characters - my son portrayed the worst Professor Plum ever, my wife a slightly bohemian Reverend Green, Maya a very bohemian Mrs Peacock and myself a rather mature Miss Scarlett. 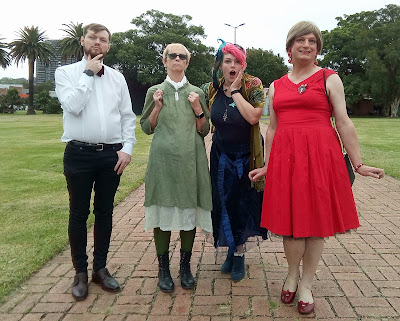 Essentially the app showed us various points on a map of Wollongong where we'd could find witnesses or useful locations. When you got within a certain distance of the point it would show the character's details and you could pick up a statement and maybe interrogate them using a limited supply of questions. Sometimes, though, you'd have to solve a puzzle first and, in at least two cases, you had to visit witnesses in a particular sequence since one would give you an object you needed in order to gain access to another. Some points awarded penalties (usually time penalties) and some offered rewards (a time bonus or extra questions).

You could guess the killer at any time, but there was a massive time penalty if you got it wrong.

At the end of the day the winning team would be the one that solved it in the shortest possible time, but there was also pries for best costumes, best team name and a few other things as well.

I think around thirty teams took part in total, so it was fun wandering the city and seeing the different costumes and groups of people having fun. We identified a likely suspect very early on, and then spent far too much time confirming it was them - it was, and it was as obvious a solution as it seemed to be. But it was fun taking our time over it.

We'd certainly do something like this again; the initial game setup was a bit fiddly but once we got started it all went very smoothly.