I enjoyed yesterday's Simplicity in Practice game so much that I played another today. Once again I generated two semi-random eight unit armies, as well as a random terrain.

However I also created a  table of setup variations for each side to roll on. Before deployment each side rolled 1D6:

1 - Delayed Units - Two units are not deployed at the start of the game and will appear on that sides' baseline as part of the random events process.

2 - Flank March - Two units are not deployed and will appear somewhere along a random flank as part of the ransom events process.

3 - Surprised - The army may only deploy in one half of their side (1-2 anchored on left flank, 3-4 anchored on centre, 5-6 anchored on right flank), and must deploy in at least three distinct lines.

6 - Complicated Situation - Roll twice, ignore further rolls of '6' and count duplicate variations as simply one of that type.

You can see how I do Random Events in the previous post.

After creating that neat table, both sides rolled a Flank march. The Russians sent their dragoons, whilst the Swedes had one of their heavy cavalry and their light cavalry.

This was the setup - six units each on the table. 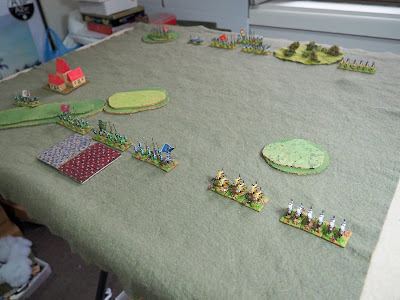 The random terrain included a village. I made up a rule on the fly that if a side has a village in their half of the table, and the enemy captures it, then that side counts it as a lost unit. A side loses when they have lost six units. So there's an incentive to protect villages.

The initial Russian plan was to hold the village and the ridge behind it, at least until the flank march turned up. 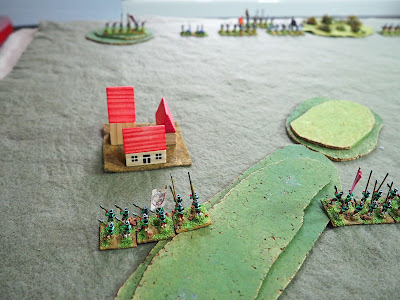 However the Russians also had an on-table cavalry superiority, and the Swedish cavalry was unsupported. The Russians sped forward to try and eliminate their opposite numbers. 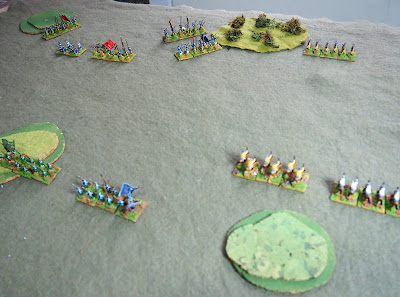 This caused the Swedes to swig some of their infantry over to that flank, and halt what would have been an advance towards the Russian-held village. 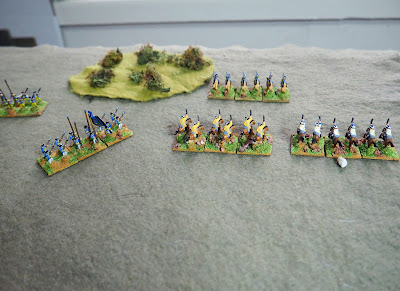 In response the Russian abandoned their defensive posture, and advanced.
You can see a few units have taken hits already. One was from artillery fire, but the rest were from random events, which can be brutal. 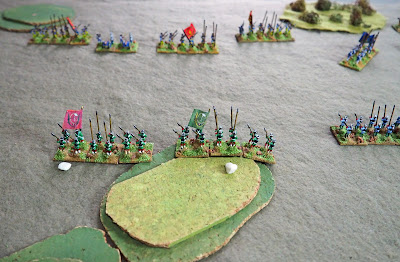 As the battle developed, the Russian flank march appeared. On their right flank. But behind their own lines. I restricted a flank march to a half-move onto the table, but would allow it to charge. 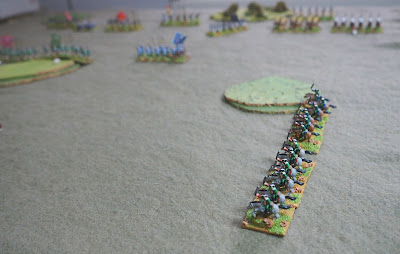 With more cavalry on the table, albeit at a distance from the battle, the Russians charged, driving back the Swedish cavalry.
(One extra change I made to the rules - if the player whose turn it is wins a close combat they initiated, the victorious unit would advance to where the centre of the enemy unit was, stopping short of contacting another enemy unit or if blocked by terrain or friendly units. This makes melee more dynamic and also allows the capture of terrain.) 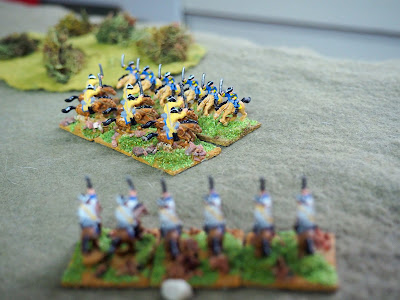 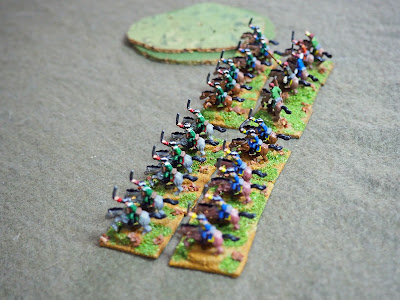 The Swedish heavy cavalry saw their opponents driven back, but the light cavarly lost their combat and was forced to retreat off the table. 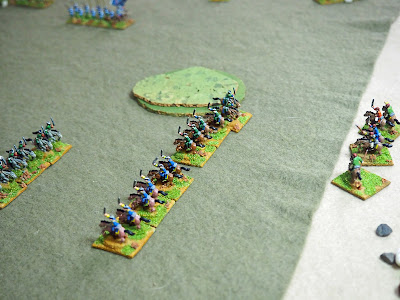 In the centre and on the other flank the infantry of both sides were beginning to exchange fire. 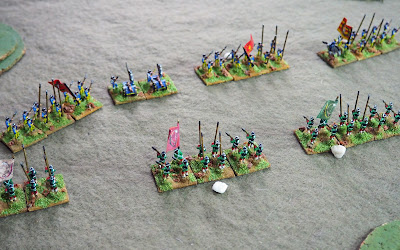 The Swedish cavalry kept up the attack, destroying one of the units of dragoons. 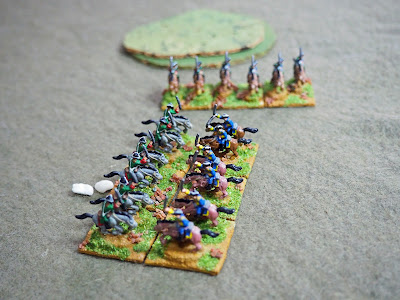 An overview of the battle. One one side the infantry were engaged in a firefight, whilst the whole Russian right flank was a confused mass of cavalry. 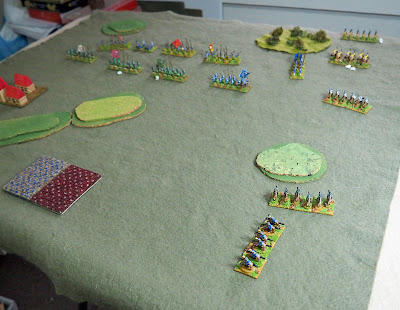 Supported by their infantry the original Swedish horse attacked, destroying the Russians. 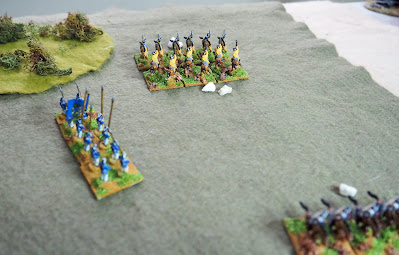 Things hotted up in the centre, when a unit of Russian infantry got a random event allowing them to fire twice, shattering the Swedish unit before them. 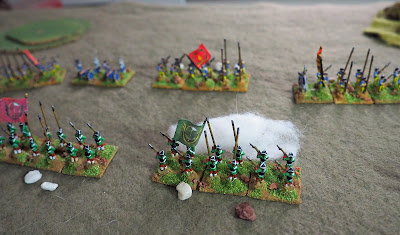 The cavalry melee on the Russian right now centred on a knoll, with units threatening each others' rears. The Russians had a slight edge in that their dragoons controlled the knoll and, unlike the Swedes, could shoot, meaning that they could stay there and wait for their opponents to attack. 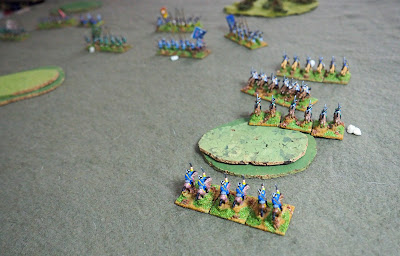 Gaps were appearing in the centre as the two sides continued to blaze away at each other.

On their left the Swedes tried to force the issue with a charge, but were repulsed. 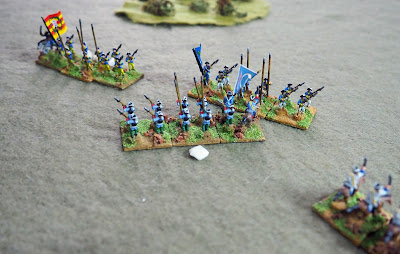 At the knoll, Swedish cavalry charged the rear of the dragoons, who, by good fortune alone, held the attack and routed the attacking Swedes. 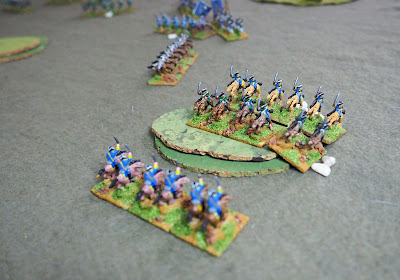 They were attacked from the front, and drove off the Swedes there as well. 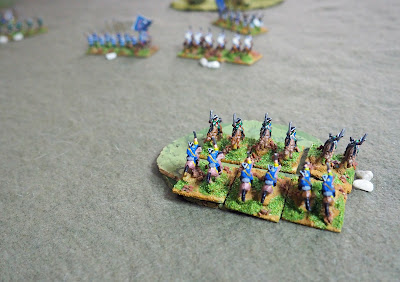 Some of the Russian cavalry worked its way across the battlefield to threaten the main infantry lines. 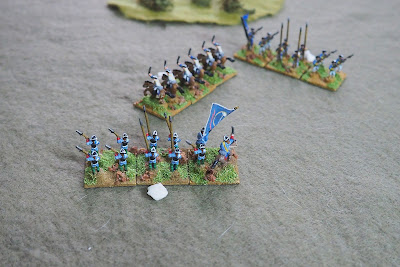 They were attacked by Swedish infantry, but saw them off, routing them. 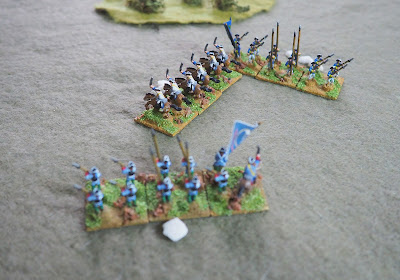 The Swedes attacked the knoll again, and this time the dragoons routed. 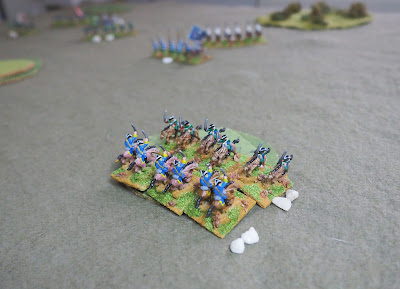 But elsewhere the Swedes were being hammered by Russian firepower. They lost another unit of infantry, leaving the Swedes with the cavalry at the knoll, and some guns. So this was another Russian victory. 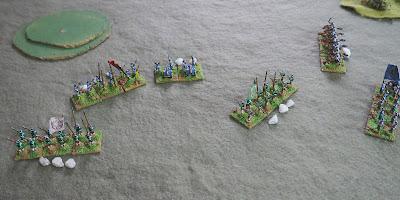 The random setup, with the flank marches, made for an interesting battle, and I'll try it again, hoping to get some different variations this time. The Russians did well on their random events; most were advantageous and they got a few turns where units were allowed double moves or double shooting, which really helped. Meanwhile fortune did not favour the Swedes, who not only struggled to win any close combats, but who had units unable to move or via via random events. But that's the fortune of war.
Posted by Kaptain Kobold at 07:00