The Return of Machinas

For the past couple of years our car-combat game itch has been scratched by Gaslands, but I thought yesterday it would be nice to set up and play a game of Machinas. When it kind of fell by the wayside back in 2018 I was in the process of rejigging a fair bit of it, and I recently came across my garbled notes and felt inspired to set something up and give it a try.

I played a four car, three-lap race. The vehicles, from top to bottom were:

Bad Blood - A gun front and back and a little bit of armour.

Mr Apollo - A little bit of armour and one big gun to the front.

Number Two - No weapons and no armour.

I played Number Two. No weapons and no armour translates to a 'cargo space' effect in my changes, which means that the vehicle can possibly score extra bonus dice during the race as the driver finds useful items stashed in the car. The other three cars were run as NPCs.

All four vehicles has a driver signature and a special feature, but I don't think any of them were triggered at any point. 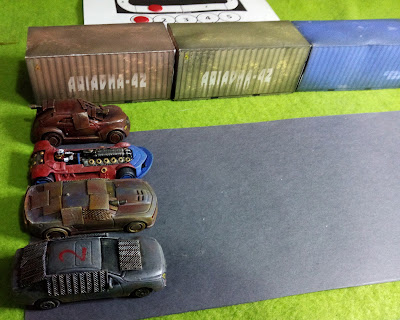 As a player I normally like to be cautious at the start and sit towards the back until the front runners have worn each other out a little. Three laps meant I had some time to play with, especially as my vehicle could generate bonus dice during the race. As it was the fast Perfect Day shot out in front, enthusiastically pursued by Bad Blood. Despite my caution I found myself in front of Mr Apollo. 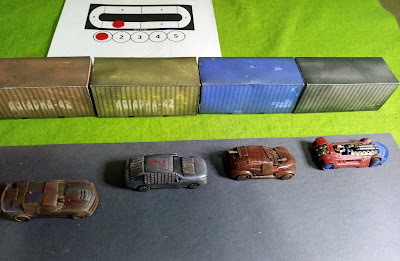 Nothing much happened for the first few turns, but on the back straight of the first lap Mr Apollo overtook me by driving on the track's shoulder. 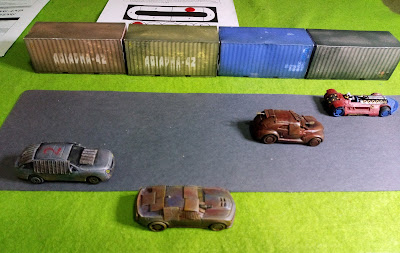 I decided to return the favour. 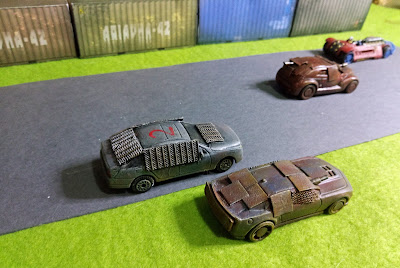 Getting the advantage in the pass I decided to make use of a superiority in bonus dice to make an aggressive move ... 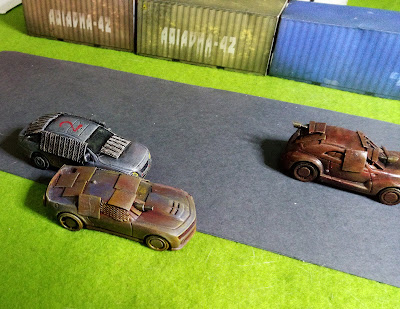 ... and ran Mr Apollo off the track and out of the race. 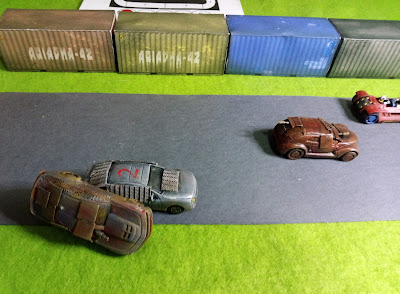 Bad Blood was putting the pressure on Perfect Day, trying to pass on the inside. 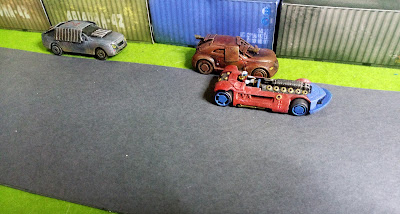 They couldn't manage it, but it wore down both vehicles, so I maintained a cautious third place. 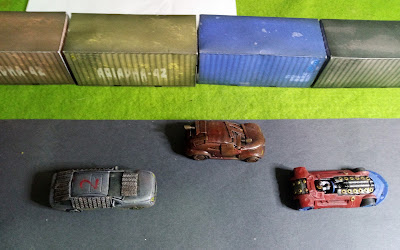 We were now into the second lap, and just leaving the first straight. Bad Blood was still being aggressive from second place. 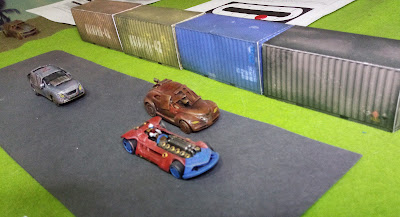 I made a run for second place. Perfect Day was a fine vehicle on straights, but was vulnerable on curves, so I thought I'd make a passing attempt on the first curve of the lap. 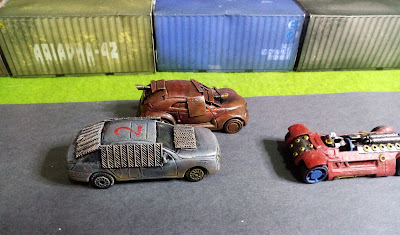 I made it into second place and then made a run for the front on the curve.

I couldn't manage it, and to make matters worse skidded on the shoulder and had a near-miss collision with Bad Blood. 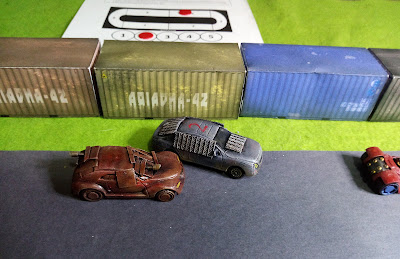 I survived! And we were now heading into the second curve of the lap. 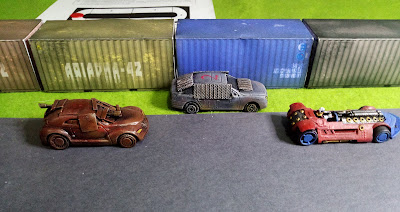 I pushed my vehicle and took first place. All I had to do was hold it for the third lap. 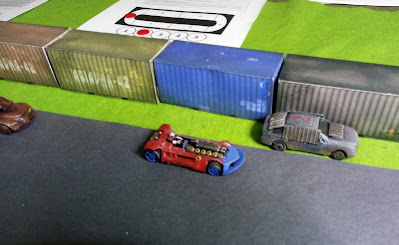 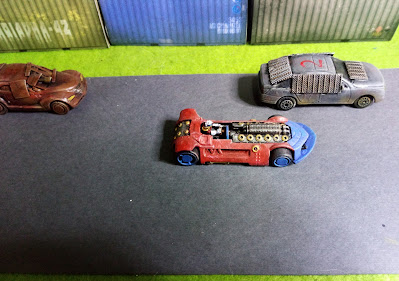 ... and failed to pass me. On a straight. Things were looking good. 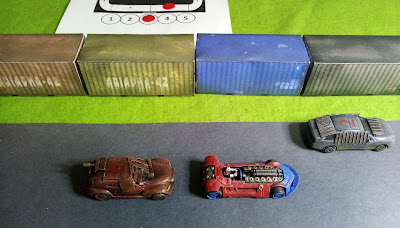 Looking good, that is, until I skidded again, and lost first place. Bad Blood closed up, looking to push me into third place, or maybe shoot me off the road. 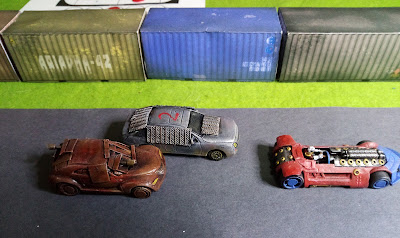 I won the pass and decided on an aggressive move again, ramming Bad Blood and wrecking it. 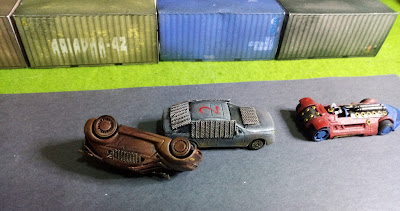 We were on the back-straight of the third lap now, and just the two of us remained. I drafted Perfect Day, building up those crucial bonus dice. 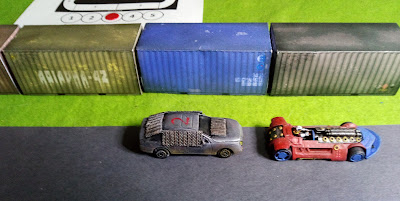 We roared into the final curve, heading for the home straight, and once again I made a move on the inside. 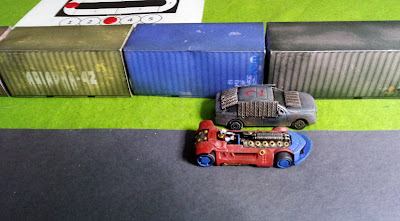 Success! Into the final straight and I had the lead. I just had to hold off a single passing attempt from Perfect Day. 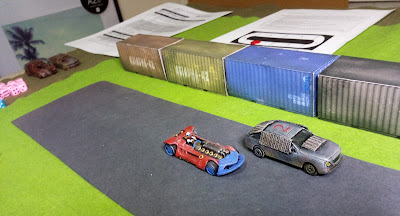 Oh no! Another random event saw my brakes lock up, and I lost ground, watching Perfect Day take back the lead. 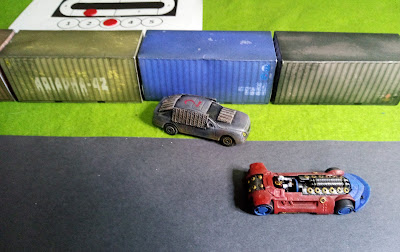 I poured everything my vehicle had into making up the lost ground. 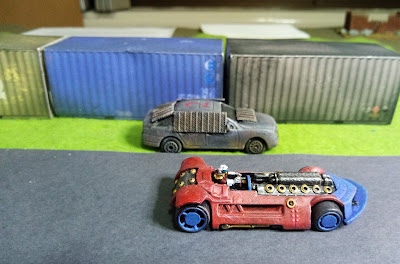 But Perfect Day just nudged over the finish line ahead of me. 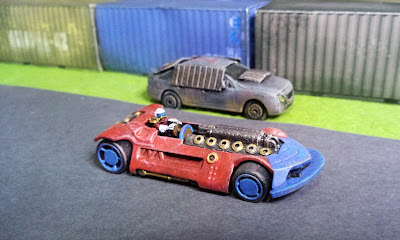 It was a very close finish; I lost the final passing attempt by only a single point!

I enjoyed having Machinas out again, even though the AI never quite gives the same experience as live players. It's hard with an AI to balance the requirements of a race with the opportunity to shoot or bash, and sometimes vehicles aren't aggressive enough. I may tweak it a little to make passing attempts less frequent but potentially more aggressive. And I still have a fair bit of work to do tweaking my extensive changes to the game. However there's no getting away from the fact that for a race/chase experience, the Machinas system is in many ways better than Gaslands. Gaslands scores on variety of gameplay and the sheer amount of chrome.