Army Showcase - The Forces of Light

Last year I had a request to do an Army Showcase for my matched pair of armies based around Alan Garner's novels 'The Weirdstone of Brisingamen' and 'The Moon of Gomrath'. Published in 1960 and 1963 respectively, these were popular childrens' fantasy novels when I was at school in the 1970s, but I never got around to reading them until I was an adult. They are set in Cheshire, in the area around Macclesfield, contemporary to the time they were written, and concern two children, Colin and Susan, who, whilst staying with friends whilst their parents are overseas, become embroiled in a magical conflict between good and evil. A lot of the concepts, creatures and characters are drawn from the mythology of the British Isles.

It's always hard to do this kind of army showcase without giving away spoilers, and I don't plan to summarise the events of the novels. Instead I will do a post for each of the two armies. The HOTT armies make use of things from both books, gleefully thrown together. Inevitably some things were dropped, simply because there weren't the points to allow for them.

In this post I will showcase the Forces of Light. Here is the army (you can click on the picture to make it bigger):

Here's the two main characters - Colin and Susan - along with the wizards Cadellin. The children would work as a cleric - one of them has a protective artifact - but this would hinder the magician in HOTT. But they also infiltrate the villain's stronghold and evade their minions so a sneaker works just as well. Colin is a plastic model railway figure whilst Susan is, I think, a Peter Pig French Resistance fighter with the gun filed off. Cadellin is a pretty standard literary wizard in the Gandalf/Merlin style, so I used a generic wizard figure from (I think) Irregular Miniatures. 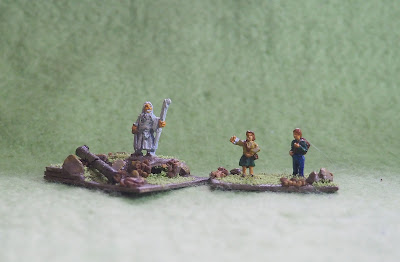 This is the hero element, depicting the man Albanac and the dwarf Uthecar. Albanac is an ERM Border Reiver with a milliput hat, whilst Uthecar is a Peter Pig dwarf whose axe has been replaced by a sword. 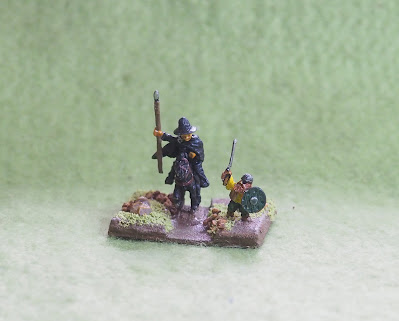 Other dwarfs feature in both books, some of them named. I have lumped them together into a single blade element. Once again the figures are from Peter Pig.

I've noticed that in some games I run them as warband, thus showing that I don't really know my own lists. They work as either troop-type. 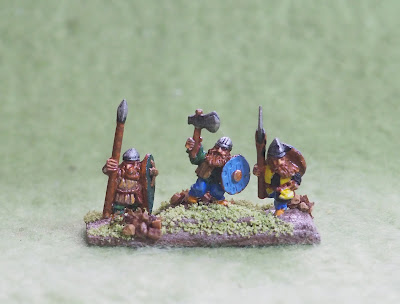 The Lios-Alfar are basically classic fantasy elves. They are four feet tall, and dress in silver and white with feather cloaks. So to depict them I used Irregular 10mm elves and a simple white/grey/pale-blue wash and dry-brush colour scheme. These are the cavalry. 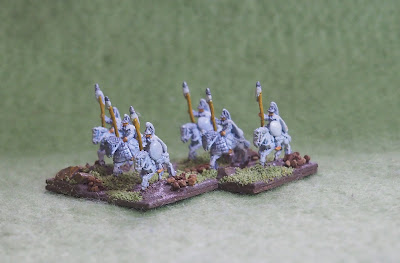 And here are the archers - one element of shooters and also an element of lurkers.

Finally 'The Moon of Gomrath' features a lengthy appearance by the Wild Hunt (The Einheriar of the Herlathing). Five different groups of them are described in detail, but I only had room in the army for two and these are they. The figures are Sub-Roman British cavalry from Outpost. 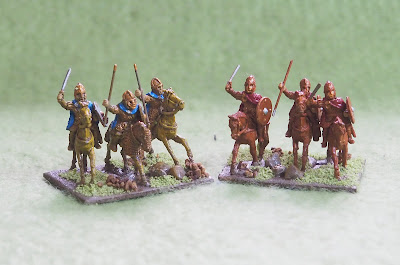 This was a fairly easy army to put together, since the fact that it's based around common fantasy tropes means that there was a wide selection of figures available. I did a lot of it using spare figures, in fact - the 10mm Lios-Alfar were probably the only specific purchase I made.

In the next post I will showcase their opponents - The Morthbrood.