We got together with our friends this afternoon to play some boardgames.

Since we had a good turnout - right of us - we kicked off with 'Secret Hitler'. This is a hidden-role game, similar to Werewolf, with the players being members of a government split into Fascists and Liberals. Everyone is assigned a role at random - with eight of us there would be three Fascists and five Liberals. Each side is trying to ensure that their own board is filled with policy cards relevant to their allegiance. There are far fewer Liberal policies than Fascist ones, though, albeit that there are more Liberals to get them into position.

Two of the Fascists are just that. The third is Hitler. The two non-Hitler Fascists get to know not only which other player is Hitler, but who the other Fascist is and ho the Liberals are.

It's simpler than it sounds. Here are a group of people who are all definitely NOT Fascists. Oh no! 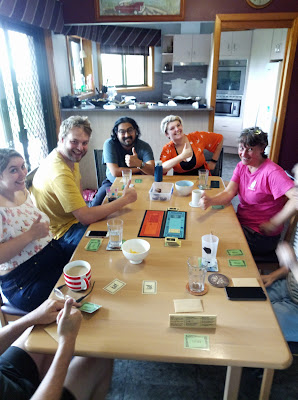 The role of President rotates around the table, and the President nominates a Chancellor. The other players then get to vote to confirm the Chancellor. If the vote rejects the nominee, the role of President passes around the table, but the country moves one step further towards an emergency. Go too far down that route and a policy is enacted at random, with the odds being that it will be Fascist. If the Chancellor is confirmed then the President and Chancellor get to draw policy cards and enact one (place it on the board). 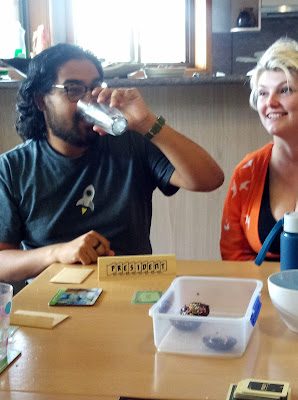 So how do you win? And where does Hitler come into it? Well, if a faction fills their board with their policies, they win. But, in addition, if at least three Fascist policies have been enacted, and Hitler is elected Chancellor, the Fascists win. So as the game goes on you have to be very careful who you select, or endorse, as Chancellor.

Because sometimes you elect ... HITLER 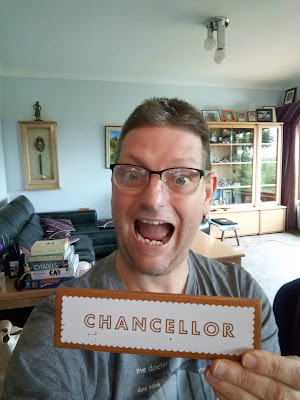 Early stages of our second game. The Liberals (blue) have two policies. The Fascists (red) have but one. Each policy after the first gives the President that round a special ability, regardless of their allegiance.  Early on these are to see the allegiance of a selected player (but not if they are Hitler), or choose the next President. Later on they can have other players shot, and removed from the game. The Liberals win if Hitler is shot. 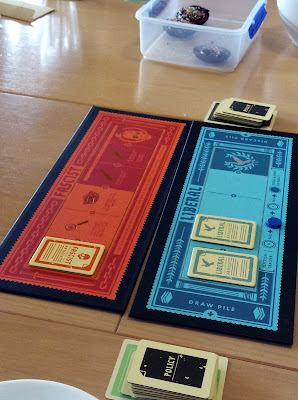 So it's a game of bluff, lies and wild accusations, with one side trying to get the other to act against their interests, and one player (Hitler) trying to work out who their allies are and get themselves elected Chancellor.

We played three games. In the first we were really just learning the mechanics, and I was able to sit quiet as Hitler and quietly get myself elected Chancellor. In the second game the Fascists won by enacting all of their policies, despite the non-Hitler Fascists being shot. This is the final game, which went down to the wire but in which the Liberals deduced who the Fascists, and more importantly, Hitler were, and kept them out of the final round in order to implement the final Liberal policy for a win. 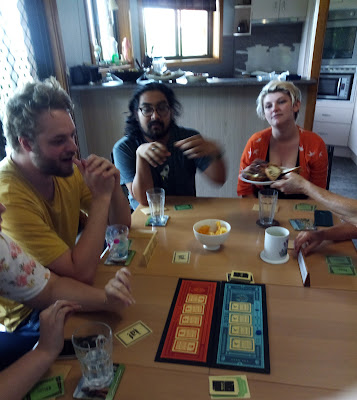 Three rounds of accusation and paranoia were enough for us. Two people dropped out for a rest, whilst six of us played a game of 'Marrying Mr Darcy'. Surprising no-one chose the two 'top' heroines (Lizze and Jane Bennet), so it was a fight between the supporting characters. 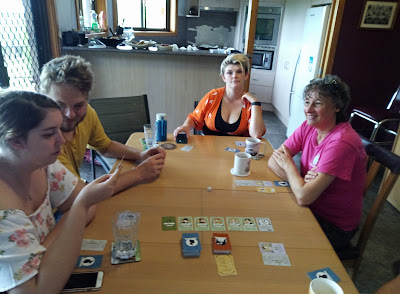 I had the bookish Mary Bennet. I started off well, but my life descended into a whirlwind of terrible losses at whist and too much wine and venison, and I really failed to develop as a young lad of my station should. I was lucky to end up in a less than satisfactory marriage with Mr Denny. Not a disaster, but one that gave me only a middling score. Top of the table was Catherine, who used Charlotte Lucas ad built her up into a very eligible wife, easily securing the dull, but reliable, Mr Collins. Laura came second. As Lydia Bennet she failed to get a single proposal at the end, but ended up as a well-off old maid with much in the way of accomplishments, predominantly gleaned from her skills in manipulating people at parties. 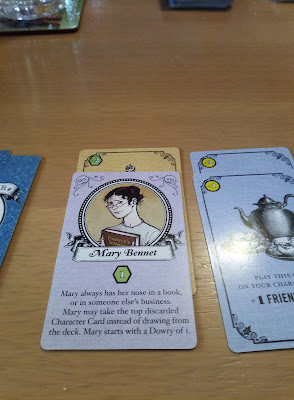 Finally we all got back together for a family favourite, The Cat Game - Pictionary with a cat theme. 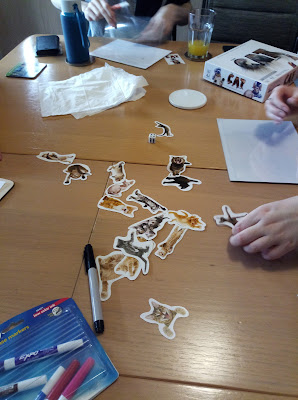 Once again we were treated to some terrible high-speed art, as the Perry Family fought the Saunders Family. It went down to the last round and only a point separated the winning Perrys from the second-place Sanders.

Here's my very obvious depiction of the activity 'Robbing a Bank'. 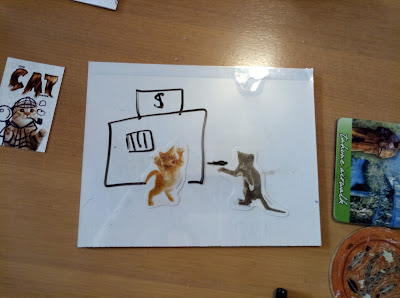