You may have noticed a criminal lack of Thursday evening game reports over the past few weeks. I've actually been turning up each week to watch, but with two burlesque shows in the offing I ended up using one of the spare classrooms at the Uni to fit in some rehearsal in a space bigger than my living-room.

But with both shows out of the way (so expect a Burlesque Update in the next month or so), I could resume my gaming. And what better way to start than an evening of HOTT?

When I arrived Geoff and Peter were already stuck into a game, and I was odd-man out. So I watched Geoff, using some nice Tolkeinesque Orcs grind down Peter's Greeks. It started off looking bad for the Orcs as Peter was wedged into a nice position with secure flanks, forcing the Orcs to hurl their hordes at his spears with little in the way of support from elsewhere. Most of the hordes died, but Geoff got the PIPs to keep bringing them back, and eventually managed to create enough of an opening to break Peter's line. The Greek's knight general found himself tucked into some woods and under attack from a behemoth and that was the end of it. 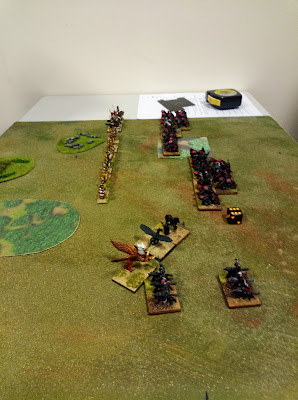 Peter then had to go, so Geoff and I played the next game. He used his Riders of Rohan (which are, ironically, mostly knights rather than riders), and I used my whimsical Garden Gnomes. I took just the one photo, but basically the snail behemoths (right) managed to take out the Rohan mounted opposite them, despite being surrounded at one point and severely down on combat factors. Elsewhere the shooters and spears took out some of the riders and one spear to pick up a fairly convincing win. Rohan's deployment was broken up by bad going, which did help a lot. 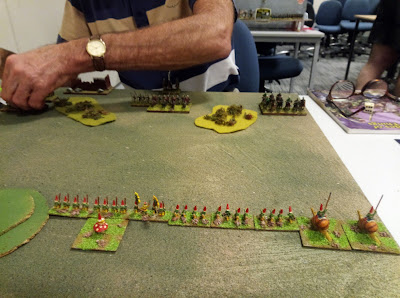 New member Ed had turned up during the second game and watched with interest. When Geoff went I offered to tech him, and he decided to give it a go. I used the Gnomes again, whilst he took a nice simple Elf army of shooters, spears riders and a single non-general hero. Non-general heroes are a good thing to learn with; you can have all the fun of using a hero, without the worry of losing the game if you make a stupid mistake. 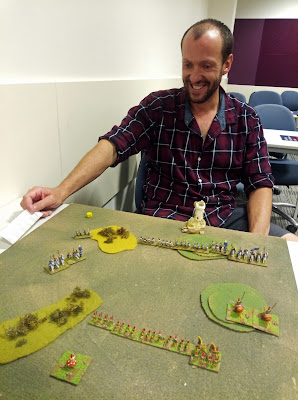 Ed's Elves defended, and I sent in the snails again, rolling up the Elven cavalry on his left. To be honest the snails then got stuck in that corner of the board and didn't really contribute much to the battle. 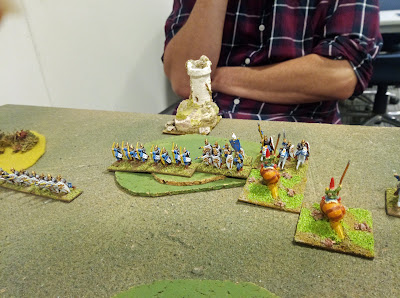 I advanced my centre and Ed did a nice job of turning my left flank. But he lost the shooter duel in the centre, and ended up somewhat fragmented and couldn't quite exploit his advantage. Meanwhile I just steadily ground the Elves down. 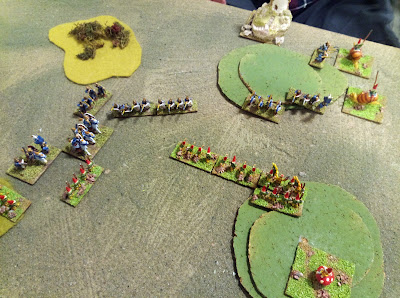 One of the maxims of HOTT is that it always pays to get your troops into a coherent line if you can, and we both managed to do that towards the end. On the hill my general was also in trouble, being somewhat isolated and in danger of being surrounded. But at this stage I was one element away from breaking the Elves. 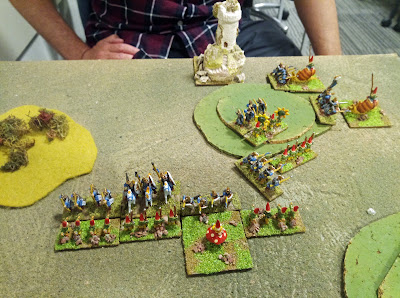 I exploited some congestion to push a spear element back into its friends for a win. 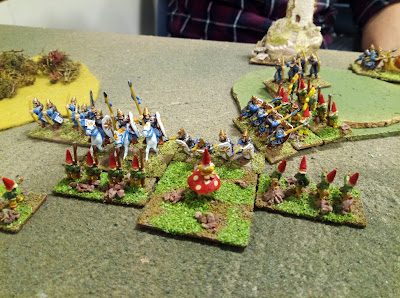 The final game was a fun one and it was good to be able to teach someone the game.