I'm still slowly working my way through, and reporting, each of the 30 scenarios in Neil Thomas's 'One Hour Wargames'. That's not to say that that I haven't actually played them all; this project was to formally do them all in order.

It's taken me about five years so far. But here I am at Scenario 23. In this one a force must cross a river and exit the other side of the board whilst negotiating unfamiliar terrain defended by a wily but numerically inferior foe.

Since I've been enjoying Simplicity in Practice with my GNW armies, I decided to use those and set it during the 1714 campaign in Finland. The Russians invaded this Swedish-controlled area and the Swedes, busy elsewhere, left the Finns to their own devices. The result was that after a few epic defences the outnumbered Finns were overwhelmed.

So this scenario sees a force of six Russian units advancing against a force of four Finnish/Swedish units. They must cross the river and exit the board by the road to the bottom-left of the picture. 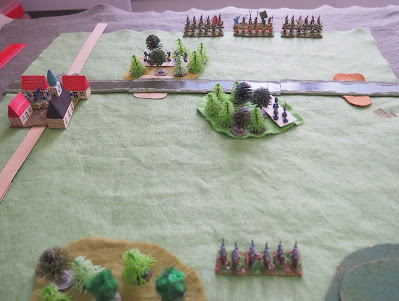 The Russian force was rolled for normally, although I adjusted the outcomes to fit my troops and the period. They ended up with four units of close-order infantry, one of heavy cavalry and one of dragoons. 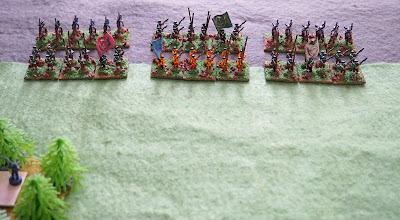 Their opponents rolled a four unit force, but had to replace two units with irregular light infantry, representing (for this scenario) militia or partisans. I apologise for them not being painted. I never needed any for Maurice - the rules my armies were assembled for - so didn't make any. But I am in the early stages of putting together another Risk-figure army which will use them, so had the unpainted figures stuck to bases in order to see how they looked. I used those.

Anyway, the defenders got one unit of Swedish close-order infantry, one unit of Finnish militia dragoons and two units of light infantry. The Swedish infantry was deployed in the village on their left, one unit of militia in a wood on the Russian side of the river and one covering the ford on the Russian right. The dragoons were held in reserve. 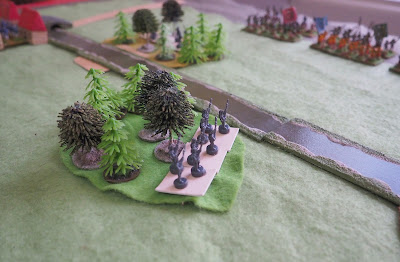 I used random events in this game, although no event would affect more than one unit. The Russians got lucky at the start, with their heavy cavalry getting a double move, which took them over the ford on their right and to a position to threaten the Finnish dragoons. 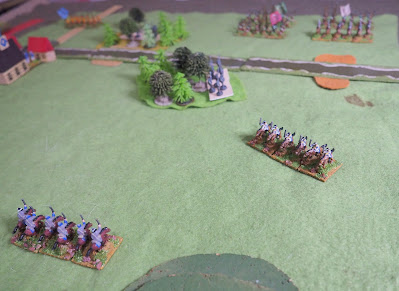 One unit of Russians advanced to wards the village, initially hovering out of musketry range, but forcing the Swedes to cover that line of advance. 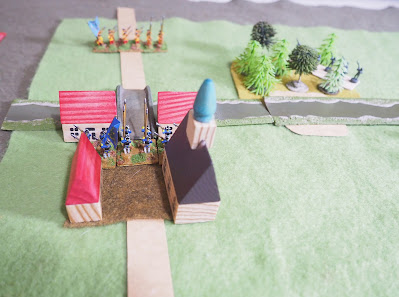 The main Russian advance was on their other flank, as they organised themselves to cross the ford. The dragoons were the second to cross, the Finnish militia firing from the woods as they did so. The Russian heavy cavalry charged the Finnish dragoons, and threw them back. 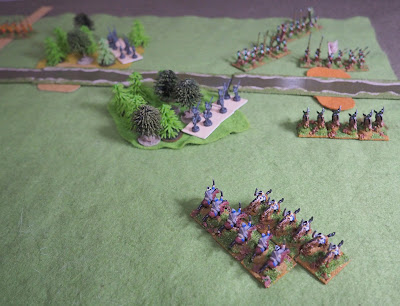 The Russians kept up the momentum, routing the dragoons, and leaving the way to the exit point clear. 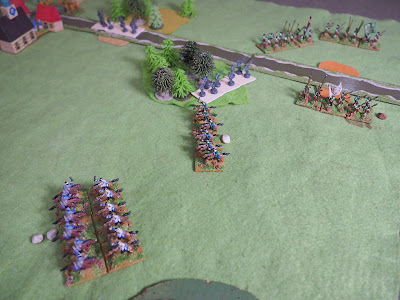 The Russian infantry at the village advanced now. It would lose a firefight with the village defenders, but it was obvious that if the Swedes stayed to defend the village they would lose the battle, as they were now needed to stop the Russian attack in their rear. 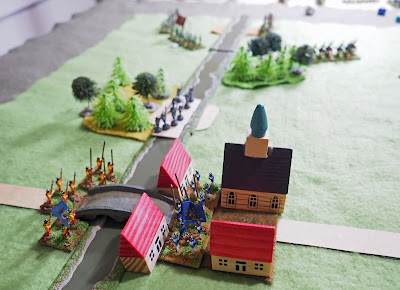 The Swedes began the slow withdrawal from the village, whilst the Russians pushed forward across the bridge. 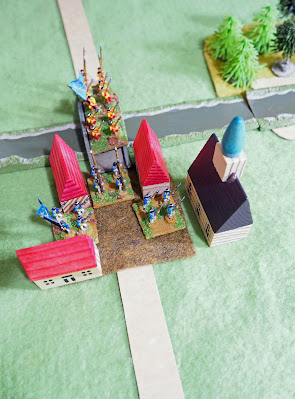 Meanwhile the forward militia had abandoned their position, and fallen back to their side of the river, but found themselves caught in the open by cavalry. 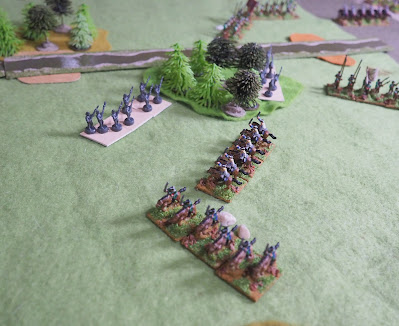 As the Swedes withdrew from the village they were attacked by the Russians, but fought them off. 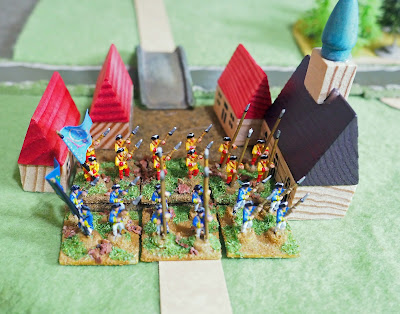 The Finnish militia weren't so lucky. and were driven back by a cavalry charge. 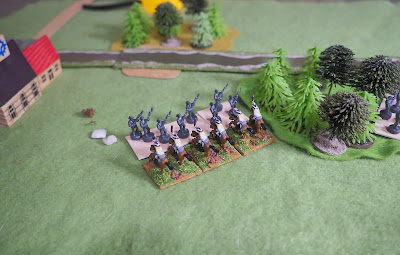 This was the position a few moves in. Russian infantry was reforming in the village, whilst the Swedes deployed on the road in order to block the Russian advance. In the centre the Finnish militia was firing at anything in range, and inflicting the odd hit here and there. The Russian cavalry was to the fore, although their dragoons had taken some casualties. Most of the Russian infantry was across the ford. However the Russian had to keep moving; infantry can be slow, and they had to exit three units from the board before the end of the game. 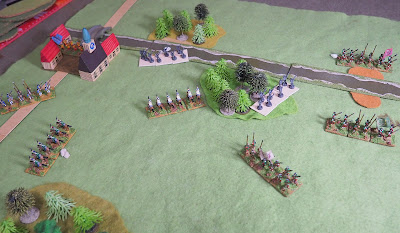 The Russians pushed the damaged dragoons towards the exit point as quickly as possible, followed by the heavy cavalry. All units were running a gauntlet of fire. 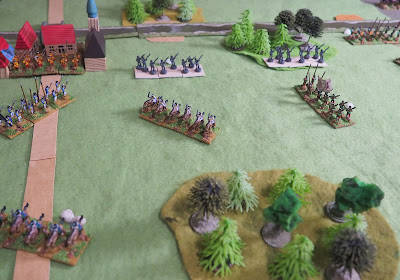 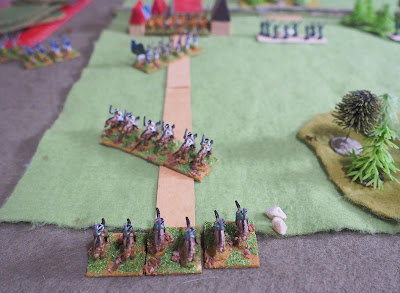 The Russian infantry in the village formed up and took the Swedes under fire, inflicting a steady stream of hits on them. 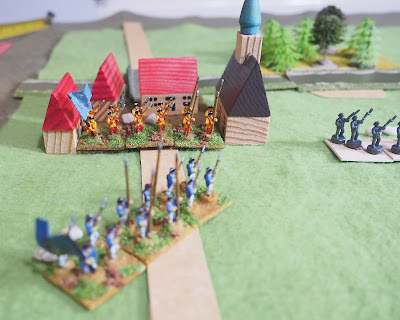 Meanwhile the lead Russian infantry unit advanced to the attack. The Swedes were looking decidedly shaky. 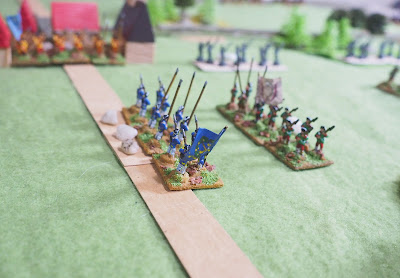 But the lead Russian unit found itself caught between two fires and routed. 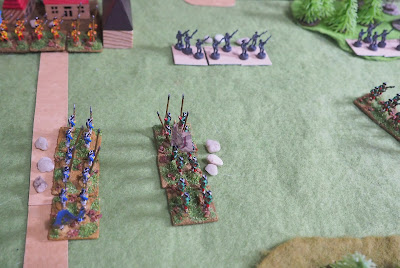 To add to the Russian problems, a random event saw the Swedes rally off one of their hits. They had to be removed to clear the Russian approach to the exit, so the Russians from the village charged. With a flank attack and more supporting units the odds were very much in their favour. 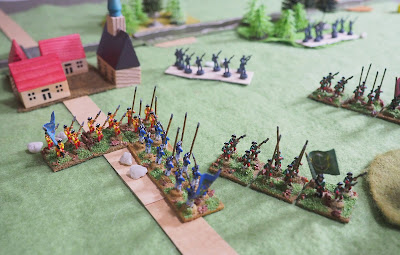 The Russians now only had two units left and had to exit one of them to win. 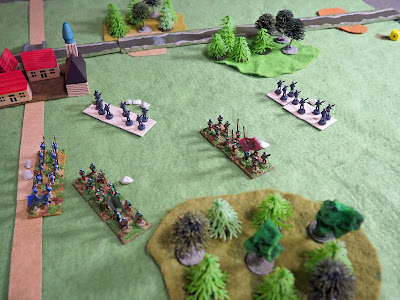 The rear Russian unit had a chance to finally drive off one of the militia units for good, but ammunition problems (another random event) saw them unable to fire. 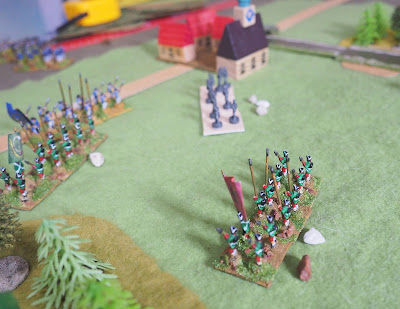 The lead Russian unit charged - the Swedes were more disordered, but had support from the light infantry, so it was a 50/50 gamble. 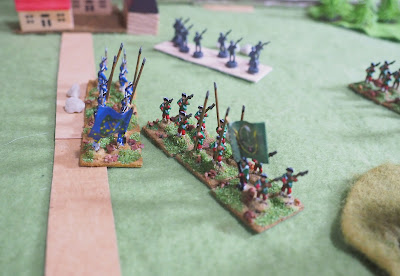 The Swedes lost, and routed. The Russians' route to the exit point was clear. 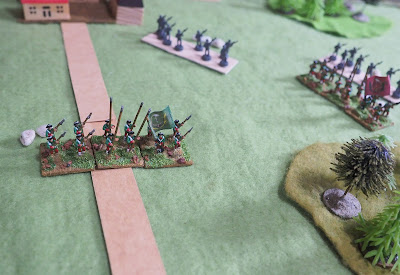 Only the Finnish militia was left now, but the Russian rearguard finally sorted out its ammunition problems and drove off one of them. The remaining militia unit haunted the rearguard, peppering it with fire ... 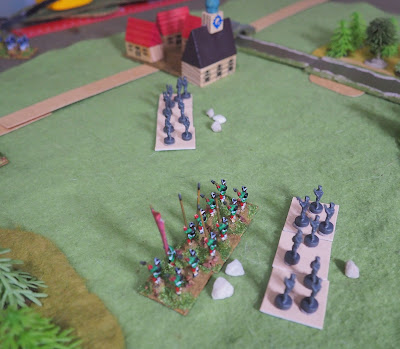 ... but only a random event could now stop the Russians from exiting their third unit, and it didn't eventuate. 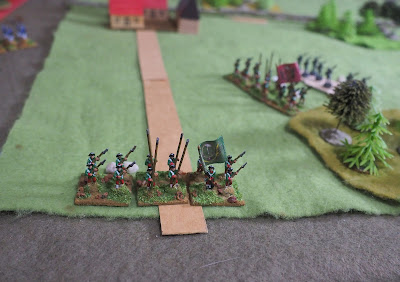 So the Russians picked up a win, despite it looking a little shaky in the middle of the game. They generally got the best of the random events which, whilst they saw the Swedes get a rally at a crucial moment, also saw them take a few random hits throughout the game. The Russians got two double moves - the first allowed their cavalry to cross the river at the beginning, whilst the second allowed their infantry to attack in the village before the Swedes could properly form up. The Swedish defence could, with hindsight, have been better. The infantry would have been better deployed back from the village; they lost a lot of time, and risked an attack, defending and withdrawing from the village. Deploying the militia in the woods on the Russian side was a wasted move as well; the Russian can't cross at that point, because they can't enter the woods. The militia cold have held the village instead, covering both approaches and leaving the cavalry and infantry as the strong second line.

I did make one small change to the SiP rules. Light infantry (the militia in this case) are very powerful, since they move almost without restriction, shoot fairly well and can combine the two things. They are vulnerable in melee, but are not totally helpless. Anyway, I ruled that if the moved before firing, or intended to move after firing (I'm not actually sure how that fits into the turn sequence) they only hot on a 5+ rather than their normal 4+. They can't have their cake and eat it.

Still, this was a fun game, and is in an interesting scenario. I see I have played it once before, using a variant of the OHW rules and setting it during the Mexican Adventure of the 1860s. You can read the report HERE.