I played another game of 'Simplicity in Practice' this afternoon. Once again I used my GNW armies; I randomised the forces (each side got three close-order foot - one elite - and one heavy cavalry, and then diced for the remaining four units), and set up a random terrain for a straight head to head fight. I also applied some changes and 'clarifications' to the rules:

(i) Close combat is resolved by each side rolling a D6 and getting a +1 for each tactical factor which applies. The highest score wins and you do a 50/50 dice-off for a draw. (This achieves the designer's goal of unpredictable close combat)

(ii) If a unit loses a close combat it turns to face its opponent, then retreats 10cm to its rear. If there are any enemy units within that area the unit is destroyed. Friendly units and impassable terrain also block the retreat unless there is a lane half a base width or more for the retreating unit to pass through and the unit can complete its retreat such that it is not overlapping such a unit or terrain. (This allows a unit to be supported to the rear without losing its ability to retreat, so long as the supporting unit is offset such that there's room.)

(iii) When calculating close combat support, count any friendly unit within 10cm of the fighting unit as a support, regardless of its facing and status (it could even be in melee itself). Both sides count how many such supporting units they have, and the one with the most gets the bonus. (This makes support quick and simple to calculate)

(iv) The player whose turn it is resolves firing and close combat one unit at a time, and applies the results at each step. This may influence the target and factors for the next unit to shoot and melee. (This just clarifies the sequence and does't require remembering anything)

(v) Elite troops with DPs count as having one DP fewer than that actually do (effectively this means that they are destroyed at five DP, but the rule also affects the calculation of relative DPs for lose combat). Poor troops start with  one DP.

(vi) If artillery loses a close combat then it is destroyed.

In addition I added random events, based on the cards in OHW, but actually via a die roll. I'll outline the mechanism below.

This was the setup, with two small villages in the main part of the table, a line of hills towards the Swedish side and some woods on the Russian right flank. The Russians are closest to the camera, with three close-order infantry, two artillery, one heavy cavalry and two dragons. I gave them a heavy cavalry to start with but automatically made all of their other cavalry dragoons. The Swedes had five close-order infantry and three heavy cavalry. The villages were considered objectives. 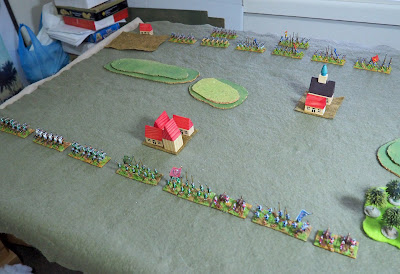 A view from behind the Russian lines. They deployed two infantry to capture and hold the nearest village, whilst their artillery and elite infantry were deployed to bombard and attack the village closest to the Swedes. Their cavalry was on their left. 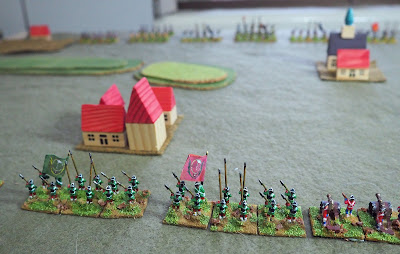 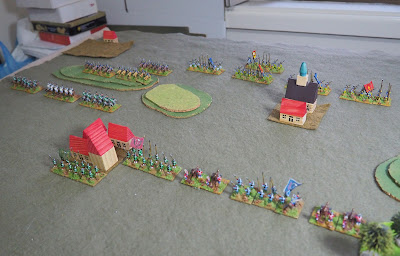 Dragoons can shoot, so it was in the best interest of the Swedes to attack, avoiding being shot at and giving them the combat advantage their heavy cavalry enjoys over dragoons. 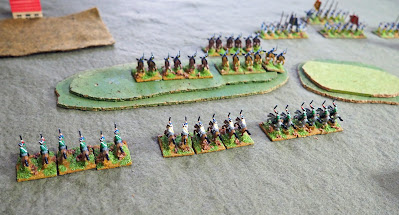 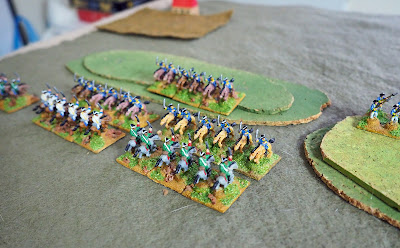 Mixed results - some dragoons fell back, whilst the Russian heavy cavalry forced the Swedes back. 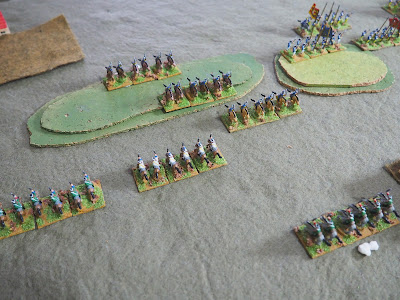 The melee continued, with the Swedes aggressively pushing forward, and the Russians doing their best to hold them. 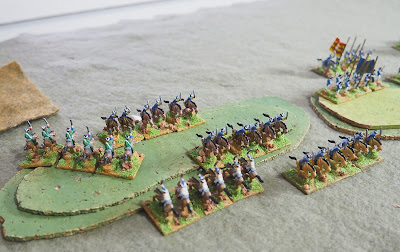 The Russians occupied the nearest village, and halted, setting up a strong position covered by artillery. Again, this meant that the Swedes were obliged to push forward; anything else would simply allow the Russians to bombard them. 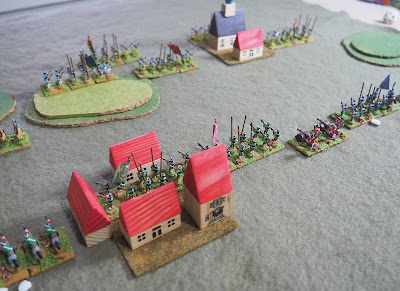 The Swedes occupied the village closes to them. 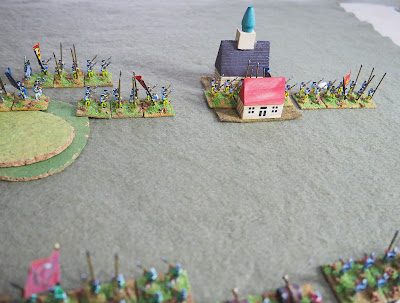 In fact the Swedish advance was made with a degree of caution, whilst they waited to see if their horse would prevail. The fight moved closer to the Russian lines, giving them more support options and offsetting the Swedes' combat superiority. 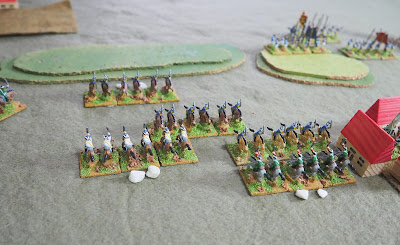 In order to support their cavalry the Swedish centre advanced towards the Russian-held village. 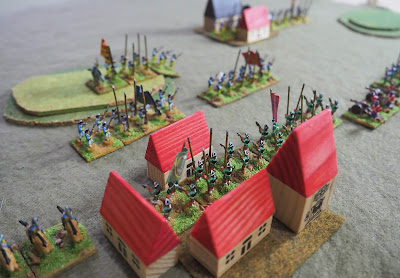 An overview of the battle. To the bottom left some Swedish horse was now on the outskirts of the village. On the other side of the battlefield the Swedish infantry occupying their village had moved forward - simply sitting in defence was inviting a slow battering by the Russian artillery. 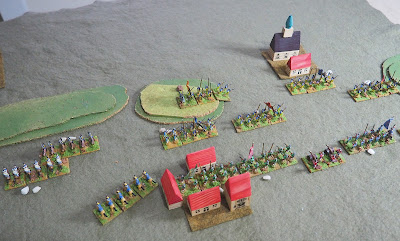 The Russians seemed to have the upper hand on their left flank, with just one Swedish cavalry unit left. 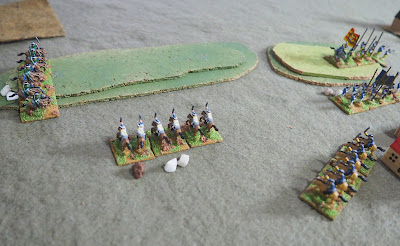 As the Russian dragoons moved along the ridge to threaten the Swedish centre, the surviving Swedish horse turned about and crashed into the rear of their Russian counterparts, destroying them. 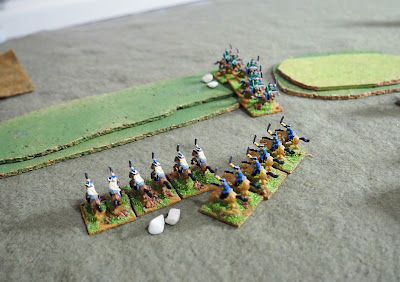 Musketry from the village destroyed one of the attacking Swedish infantry units. It was obvious a firefight wasn't going to win the day, so the Swedes attacked. 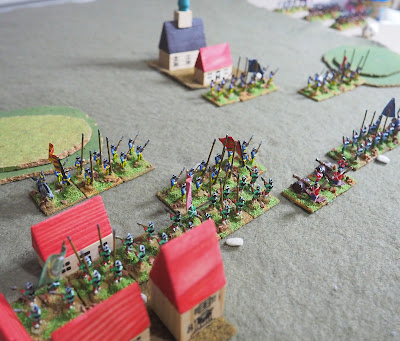 They engaged the Russian infantry supporting the village, whilst their elite infantry came up in support. 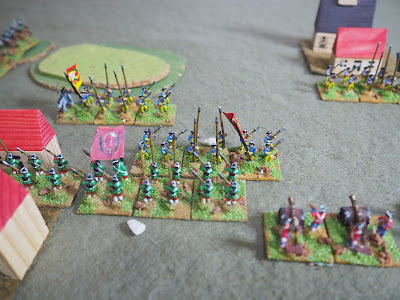 The Russians fell back, shattered, and the Swedes swung onto the Russian artillery. They fared less well here, and fell to a close-range cannonade.

The Swedish cavalry routed the final unit of Russian dragoons. They now had the only cavalry on the table, but the rest of their force was suffering badly. 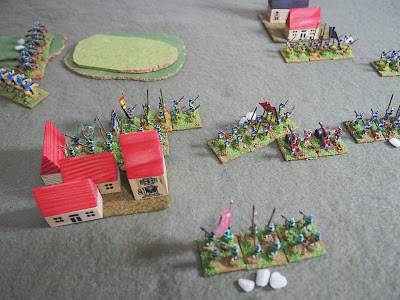 The Swedish elite infantry attacked the village and drove the Russians back. 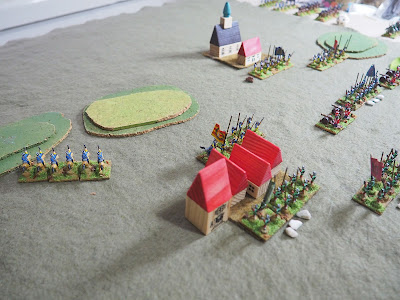 The Russians counter-attacked, driving the Swedes back from the outskirts. 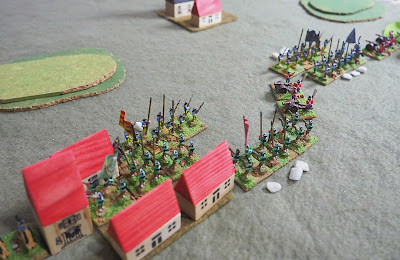 On the other flank the Swedes were suffering badly from the Russian artillery, so again they attacked. The Russian Guard infantry destroyed them. If the Swedes had won then the Guards would have broken. 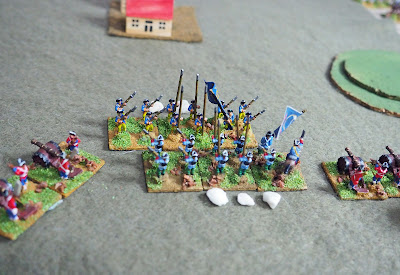 With only two Swedish units left I called it a Russian victory. 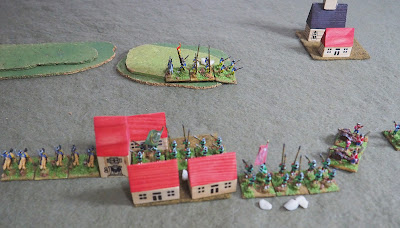 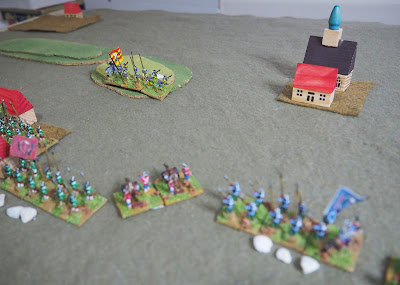 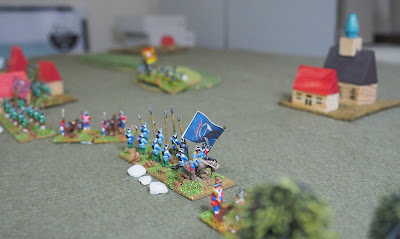 This was even more fun than the previous game, with the slight differences in the makeup of the two armies having an interesting influence on the tactics and battle-plans.

One thing I did feel might be needed is some kind of advance after combat, even if it's just to occupy terrain such as taking a village by assault, or attacking an enemy on a hill. The trick is coming up with something simple within the spirit of the game.

As for the random events, they had a steady, but subtle influence - the Swedes suffered some unwanted DPs early on, whilst the Russians saw one of their units unable to shoot at a critical juncture and one of their cavalry unable to move when threatened by the enemy.

These are the rules I used for the random events. At the start of their turn a side roll a D6.

Units are always determined randomly. In this game I rolled a D8 (since a side had eight units), but if that gave a unit that had been destroyed then I simply discarded the effect in that case (so as you took casualties random events were less likely to happen).