I had a yen to get Neil Thomas's 'Simplicity In Practice' out again, so set up a quick game yesterday afternoon using my GNW Risk armies. I used one the the OHW scenarios - Pitched Battle (2) - as it has minimal terrain and it a simple fight to get me used to the rules again.

On the right are the Russians and on the left the Swedes. Both sides had four close-order infantry and three heavy cavalry (or dragoons - it doesn't matter because they're all the same). The Russians rounded out their force with some artillery, whilst the Swedes fielded some ally Cossack light cavalry. I used eight units a side instead of six. 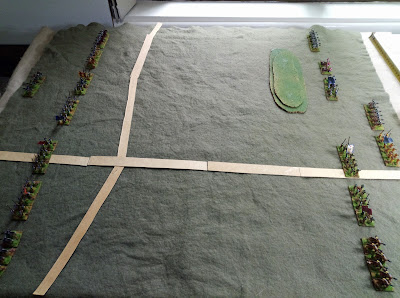 The objectives are the hill ... 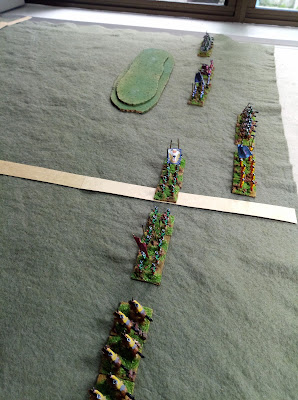 ... which the Russians quickly seized ... 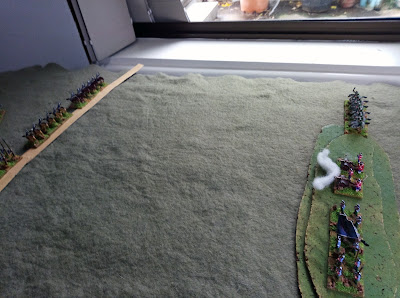 ... and a crossroads, which the Swedes soon had under control. 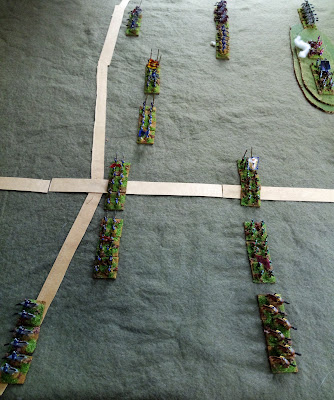 The first fighting was at the crossroads with the Russians quickly advancing into musketry range. 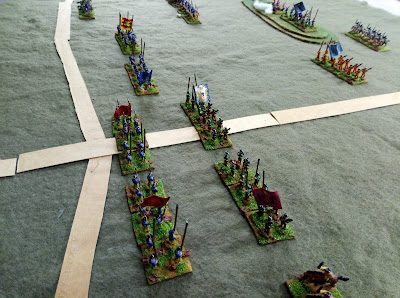 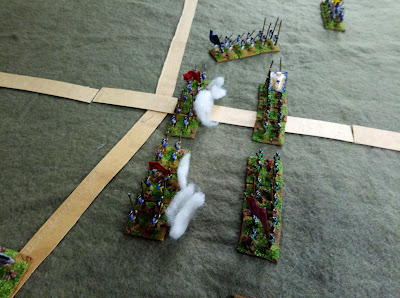 The Swedes attacked the hill with their cavalry, in a risky venture ... 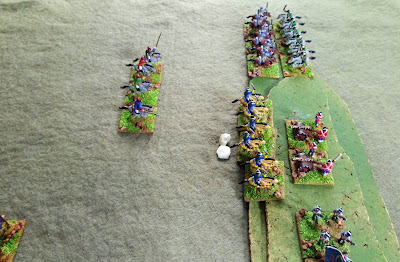 ... which didn't pay off. One unit of cavalry was destroyed by the artillery, although the other did drive back its Russian counterparts. 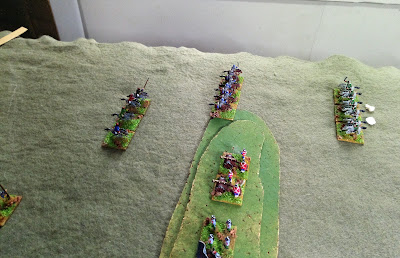 Cavalry units fought on the other flank by the crossroads, with the flanks of the enemy infantry being the prize. 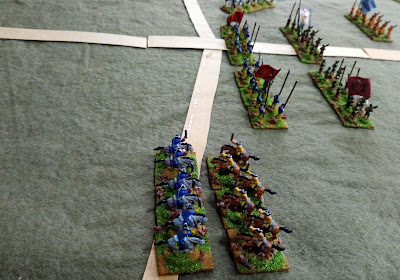 An overview of the early stages of the battle. The lack of small white stones shows that casualties so far have been light. 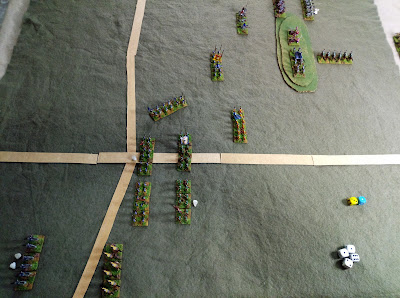 Both sides now had three of their infantry units fighting for the crossroads. 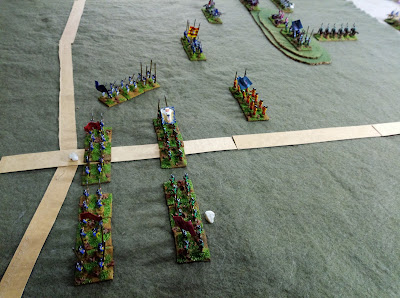 On the hill the Cossacks were skirmishing with the guns, whilst the Swedes pressed home another cavalry charge. 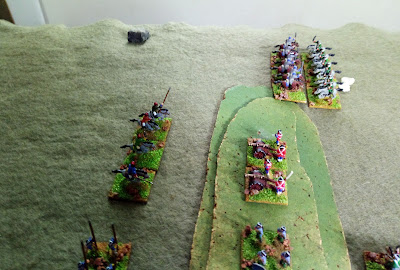 The Swedes were driven back, and the Russians brought up their reserve cavalry behind the hill. 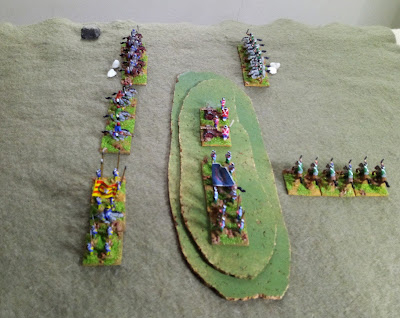 The fight for the crossroads continued, with the Swedes looking strong having inflicted some hits on the Russians. 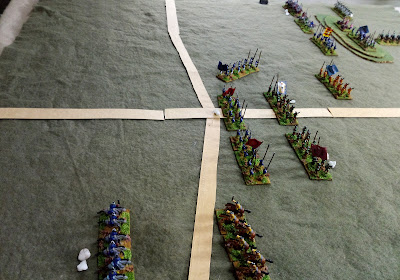 Infantry were now also engaged at the hill. I gave both sides one elite infantry unit, which always counted as having  one DP less than it actually had. And they faced each other at the hill.

The Swedish cavalry had driven off the first Russian cavalry unit, but now faced the reserve. 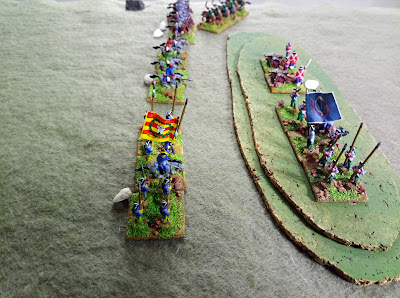 The Russian cavalry charged on their left, routing the Swedes and opening up the flank. 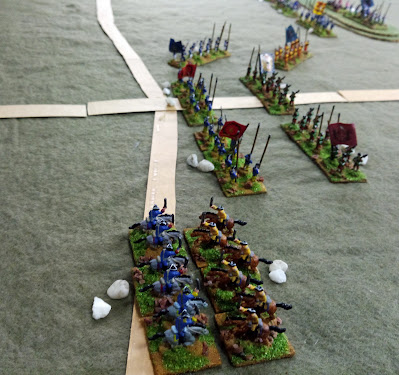 The Russians followed up with an infantry charge, which broke the Swedish infantry opposite them. 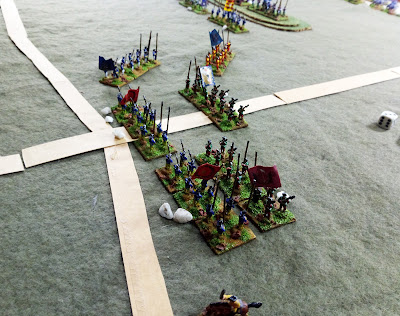 The Swedish right was now collapsing. They did destroy a Russian foot unit in return, though. 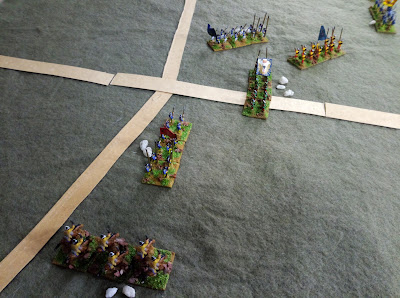 Fighting continued at the hill. 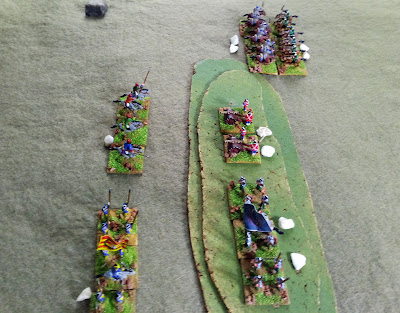 But at the crossroads two more Russian charges saw the last of the Swedish units there routed. 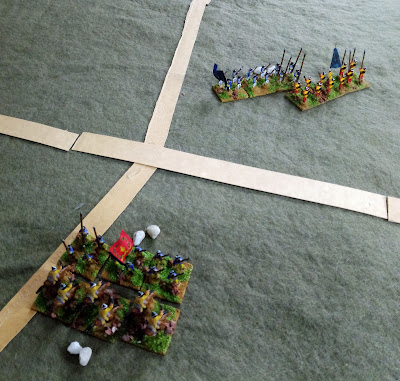 The Russians regrouped, leaving the battered cavalry to guard the crossroads, and sending an infantry unit to help defend the hill. 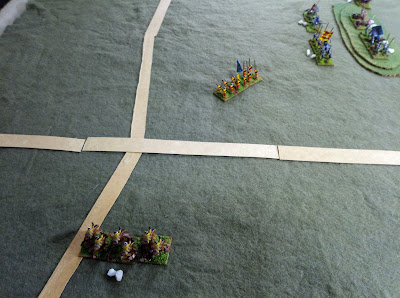 With nothing left to lose the Swedes threw their remaining units into an attack on the defenders of the hill - if they won both combats then they would control it and could possibly detach cavalry to retake the crossroads. 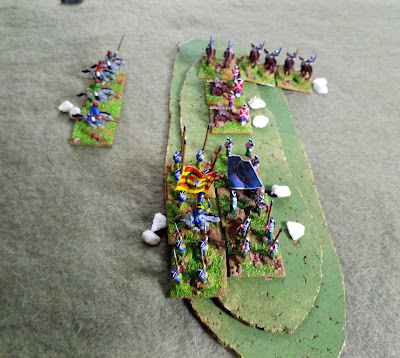 But the artillery saw off the attacking cavalry ... 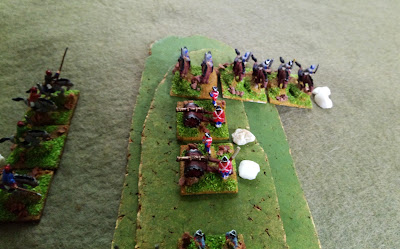 ... and the Swedish elite infantry was driven back as well. 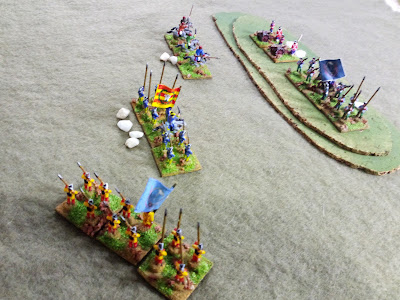 At that point I called the battle for the Russians, since I couldn't see the Swedes surviving much more than a turn, let alone taking either of the objectives.

'Simplicity In Practice' rattled along nicely and gave a fun game. Timing of attacks is important, since melee advantages can be critical and wining a melee decisive. A few fights were won or lost by careful positioning of units to create supports.

I played with one change. The original rules have a Buckets Of Dice approach to melee, which means that a side with even one advantage has about a 90% chance of winning. I went with a single opposed die roll, with each modifier providing plus or minus one. This makes melee more unpredictable which is actually one of the author's stated design aims.

One of the melee modifiers is for having more friendly supporting units within 10cm of the melee than the enemy does, but it doesn't clarify what counts as support of from which point the 10cm is measured. So I adopted a simple approach - I count any friendly unit within 10cm of the fighting unit as a support, regardless of its facing and status (it could even be in melee itself). Both sides count how many such supporting units they have, and the one with the most gets the bonus. It's quick, simple and unambiguous.