Many moons ago (although maybe not too many) Peter over at Grid-Based Wargaming posted an idea for a campaign system based on Snakes & Ladders. "What a great idea", I thought, then promptly forgot about it. But someone else - and you'll have to forgive me because I forget who - reminded me of it just before Christmas, and I'd had it tickling away at the back of my mind as a possible project with which to kick-start the year.

So this evening I gave it a go.

I decided to do an ECW campaign, since I fancied getting my Portable Wargame rules out. I  dew up this board. My graphical talents are nowhere near as good as Peter's, so my board lacks actual arrows showing the 'snakes' and 'ladders' and the square simply tells you to move up or down. Both sides move a counter along the track according to the rolll of a D6. If you hit a ladder you go up and if you hit a snake you go down. If you reach one of the double-sized battle squares then you fight and action and the moving player gets a free move afterwards if they win. If a side reaches the last battle square then the Final Battle is fought, with the side that triggered it getting an advantage. So it's worth being the first to get there.

So here we are at the start, with the Royalists in blue and Parliament in red. 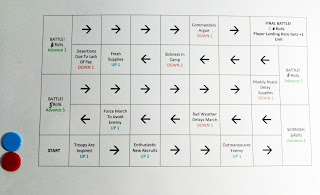 The Royalists went first, with a '1', which saw them simply recruit the army on the first square. Parliament responded with a '2'; their army was enthusiastic and went up a row. 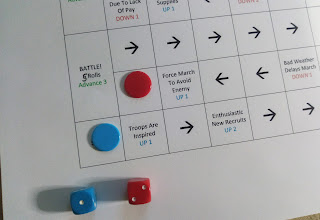 A Royalist '5' simply saw them progress along the track. Parliament's roll was always going to land them on a Battle square. So a Battle it was, with a three square advance for Parliament if they won. 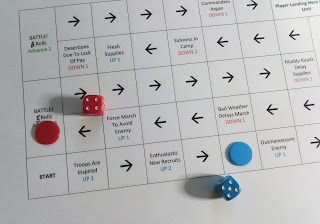 The earlier a battle is on the grid the fewer potential units there are. This one had five units per side. Both sides rolled 5D6 to determine what the units were. a 1-2 was a Foot unit, a 3-4 a unit of Horse, a 5 eitehr Artillery or Dragoons and the first 6 rolled meant that the side didn't get a unit, but could upgrade the quality of one of the other ones after checking for quality. For that was the next stage - a 2D6 roll for quality of each individual unit (2-5 Raw, 6-9 Trained, 10-12 Veteran, and a -1 modifier for the first 3 battles). Any further rolls of 6 would be rerolled.

Parliament rolled four Horse, and one upgrade. The horse were all Trained except for one which rolled Raw. I opted to upgrade that to Trained as well.

The Royalists rolled five units - three Horse and two Foot, one of which was determined, by an entirely arbitrary roll, to be all-pike. Both foot and one of the Horse were Raw, and the otehr two Horse trained.
I generated the battlefield randomly. I dice for each section of four squares on my 8 x 8 grid, with a 5 or 6 indicating terrain. I have some cards with terrain layouts marked on them, covering one, two or three squares, and one is randomly assigned to such a group. I ended up with this terrain, and deployed the armies. Parliament was outnumbered, but had a slight edge in terms of quality. They massed their troops on one flank, mostly avoiding the Royalist foot and hoping to drive off the Royalist horse for the win. 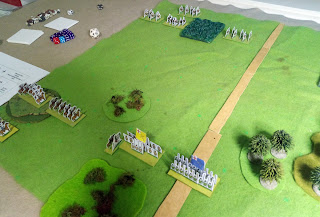 The Royalists started strongly, advancing their whole force. I used a mashup of the original ECW Portable Wargame initiative rolls (with random events) and the one I was trying for the ACW the other day. It was a mess. I won't do it again. In future games I'll jut use the ECW method as is. Parliament got off to a bad start when a squadron of horse deserted straight away (one of their units took a hit). 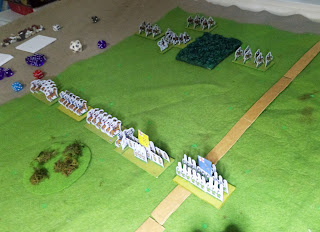 Parliament had one unit of horse screening the infantry, and, seeing an open flank, it went for it. The infantry fended them off, and Parliament took some more casualties. 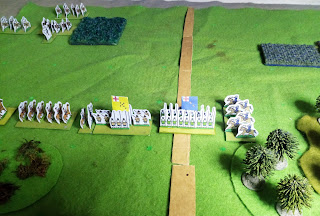 The horse clashed. Parliament had now benefitted from a random event, with their commander's unit getting a bonus in combat this turn - a rousing speech as they went in, maybe. Or a fervent prayer. 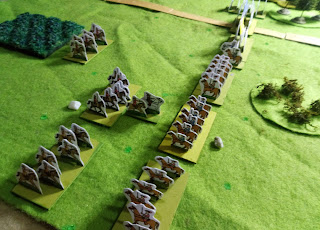 The Royalists were driven back. 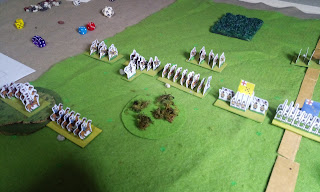 The Royalist foot used musketry to drive one of Parliament's horse units back, though, allowing the Royalist horse it was facing to turn and attack the main force of Parliamentarian foot in the flank. 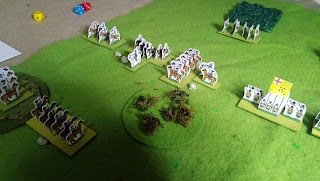 They swept the unit away, and engaged the next one. 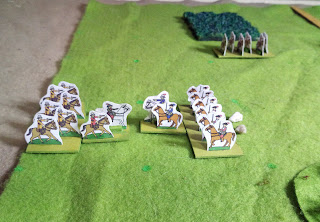 The foot advanced to prevent other Parliamentarian foot coming up in support. 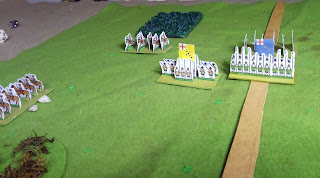 A wild melee developed, with charge and counter-charge. The Royalists wisely kept their raw horse away from the fight at this stage, since it had already taken one hit. 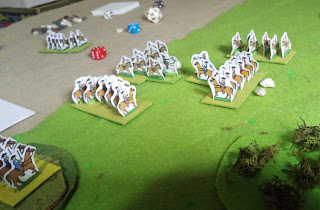 The foot now closed on a lone unit of Parliamentarian horse, which found itself pinned. 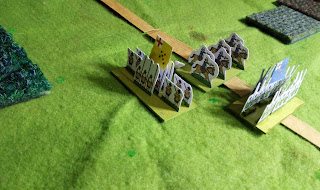 A Parliamentarian counter-attack routed a unit of Royalist horse, but Parliament's loses were now such that they had to take a break test. They failed, and the battle was lost. 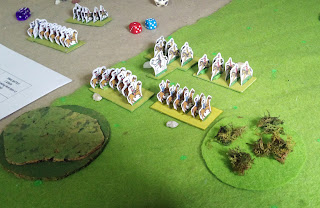 The Royalists gained nothing for their win, but Parliament was denied a chance to advance three spaces.
The Royalists rolled on the board next, and a '5' meant that they triggered a skirmish, with four units a side. 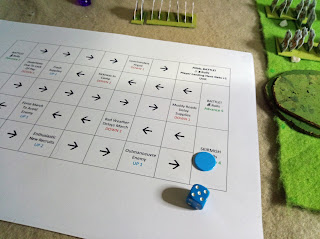 The terrain saw a village in the centre of the board, which I made an objective.

The Royalists got a unit of trained foot, some artillery (always trained) and some horse, one raw and one veteran.

Parliament was opposing them with a unit of trained foot and three units of horse, two raw and one trained. 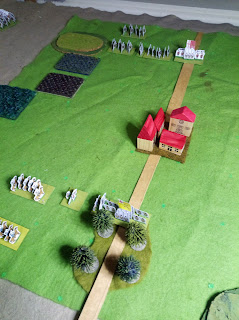 I have set up this game and will fight it tomorrow.
Posted by Kaptain Kobold at 22:31