We had a small family get-together yesterday, so the five of us played some boardgames in the afternoon.

I didn't take any pictures of the games in progress, so you'll just have to live with the box-art

First off we played Trias, which we haven't had out for years. 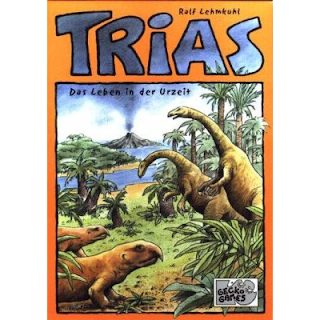 In this game you have herds of prehistoric beasts (not strictly dinosaurs, despite that being what all the player call them) on the supercontinent Pangaea. However this continent, made up of hexagonal tiles depicting mountains, steppe or forests, is slowly breaking up into smaller continents. Your goal is to spread your beasts across as many of the fragments of Pangaea as you can, preferably on the larger ones, before the meteorite arrives and causes a game-ending mass extinction.

I won't bore you with the details of a report, except to say that I had an unexpected win. My son was doing pretty well, but I jumped ahead by a single point at the end by virtue of having a single beast on a continent consisting of one fragment. The top three players were all within two points of each other.
Inspired by one blast from the past, we got out another - Marrying Mr Darcy. 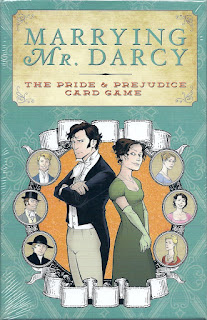 This is really a narrative game; there's not a lot of strategy. Each player plays one of the heroines of 'Pride & Prejudice' as they seek to improve themselves and find a husband from among the six eligible suitors from the novel. Each heroine is looking for a different perfect husband, but competition is still fierce, and despite your best efforts your chosen suitor may not propose to you. The game is driven by an event deck, which gives each heroine rewards or penalties. The events are derived from incidents in the book.

Our game saw all five chosen heroines ruthlessly bettering themselves, despite some terrible luck gambling at whist and a party where all of us played the piano very badly indeed. Kitty Bennet (Cei), with not a thought of her own in her head, eloped with the fortune-hunting Mr Wickham, which wasn't too bad since she actually scored well for marrying him. Jane Bennet's (Michelle) reputation suffered from the elopement though, and this affected her chance of a suitor proposing. Despite meeting their standards, no man was interested in her, and she ended the game living a comfortable, if slightly impoverished, life as an old maid. Once again the points were close at the top. Mary Bennet picked up a husband in Mr Collins for a respectable score. Elizabeth Bennet (Catherine) gambled on getting a single proposal from Mr Darcy. It paid off, and it looked like she was set for a win. But I was still in the running with the wealthy Caroline Bingley. I got proposals from most of the suitors, but kept my nerve right to the end, risking that I'd get one from my top pick, Colonel  Fitzwilliam. And he obliged! That was enough to put me one point ahead of Catherine, for another win.

We'd forgotten how much fun both games are, especially Marrying Mr Darcy, which is very much a game where you have to get into character (indeed it bills itself as an RPG). Hopefully we'll find a chance to get them out again sometime soon.

Update: You can read an excellent piece on Marrying Mr Darcy in the context of the novel HERE