Welcome back sports fans! This is the second, and final, post of our Flamme Rouge 'Tour of Sardinia'. You can find Part 1 HERE, which has links to the source of the maps and so forth, as well as how we've run the thing.

When we left off, the Red team (Peloton bots) was well in the lead on points, with my Blue team a distant second. Catherine was closing up on me with her Green team, whilst the Black team (ordinary bots) languished at the bottom.

Course 4 starts off with a nice long flat section, but then goes into a series of ascents and descents. Some good timing and positioning on the run from Guspini to Ingurtosu could see someone cruise through relatively easily, by using the momentum from the first descent to skip over the second ascent. A final descent gives a nice run to the finish. 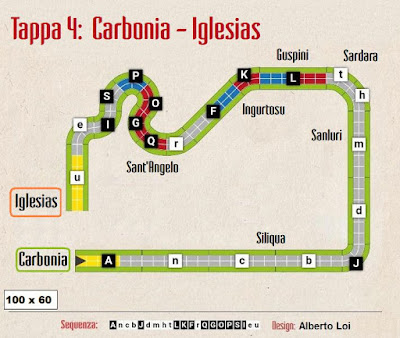 Despite starting at the back of the grid, Red got off to a flying start. Catherine and I played more cautiously, hoping to pick up some slipstreaming momentum. 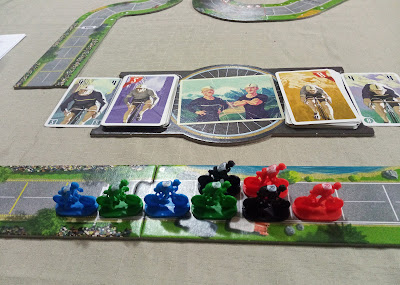 And there wasn't much change when we got further along in the race. 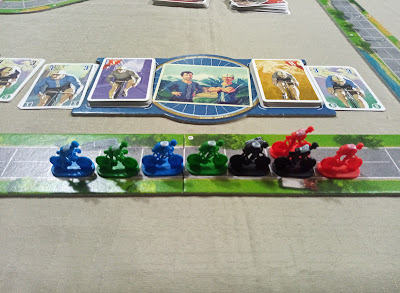 On the run to the first ascent, Red and Black both had riders break away. 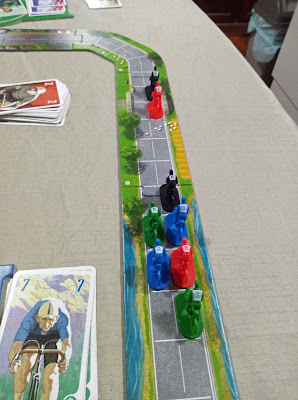 But they were quickly caught. 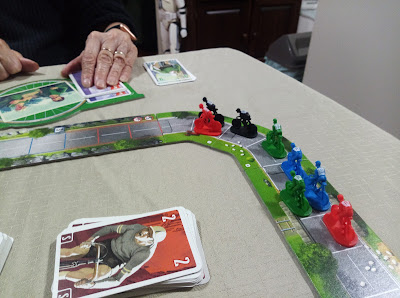 The tricky jostling for position on the first ascent began. 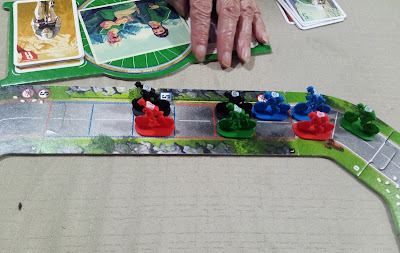 I messed it up and didn't come off the hills how I'd hoped. But Catherine ended up with her rouleur completely isolated from the rest of the riders and really struggling. 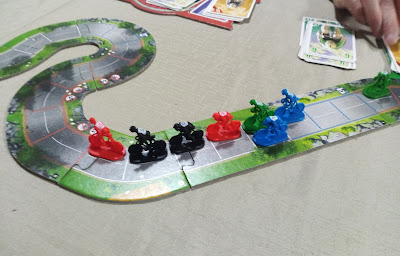 One more ascent and a short run to the finish, and I was stuck at the back of the pack. This was not looking good. 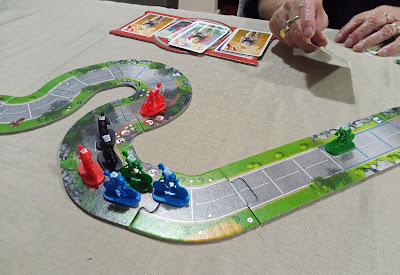 It looked like Red was going to win this again ... 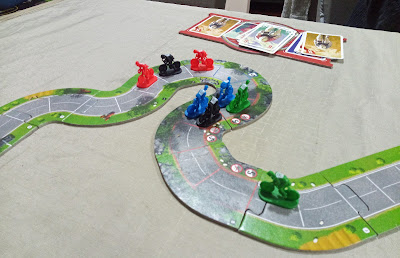 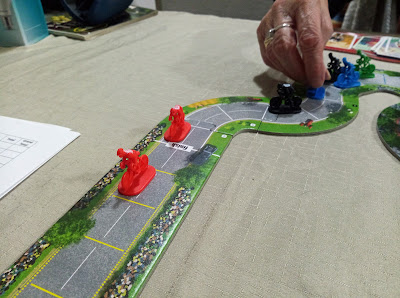 But I didn't take pictures of the next turn, which saw my rouleur manage a final dash through the pack to nab a cheeky fourth place! Catherine finished in fifth and eighth place.

So not a good race for either of us. we just couldn't break out of the pack and set up a run, or manage the right positioning on the hills.

The final stage looked set to provide some drama. With one small hill a third of the way along it was otherwise a flat course for sprinting. 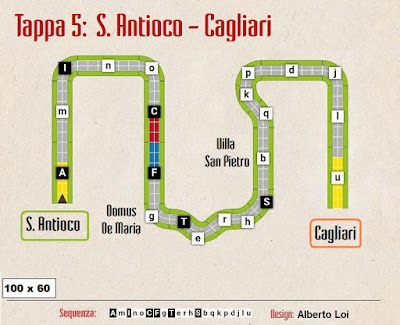 So a race for conserving energy and then saving yourself for a final dash. It would all be about position and timing.

Once again Red got out in front, although only with a single rider. 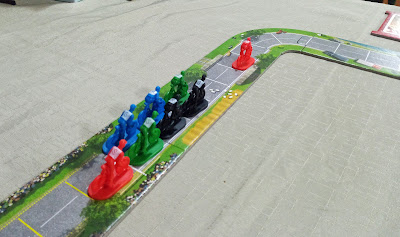 The other Red rider slowly caught up. The rest of the pack jostled for position as we left the first flat section and headed for the one hill. 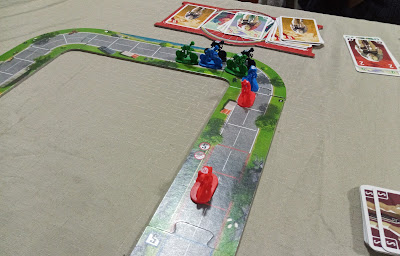 Red took the hill with ease, whilst everyone else struggled a bit, trying to conserve energy for the final dash. 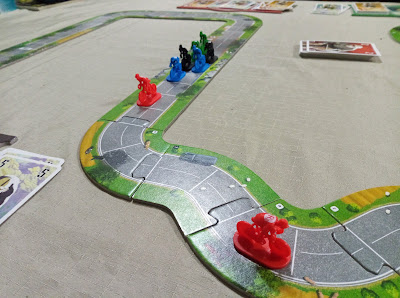 Off the hill, and the pack were in hot pursuit of the Red team, who were losing ground a little now as their decent cards ran out. 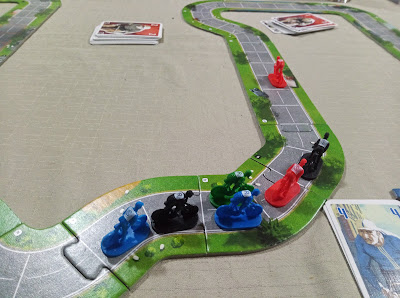 We were within one or two moves of the finish now - if you had decent cards saved up. I did. 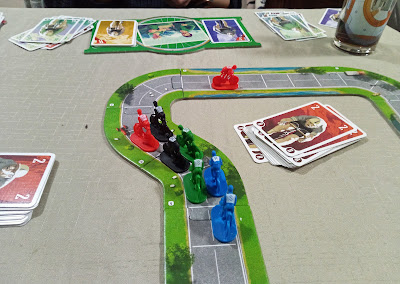 So did Black. So did Catherine. 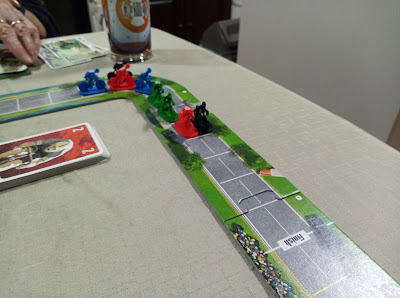 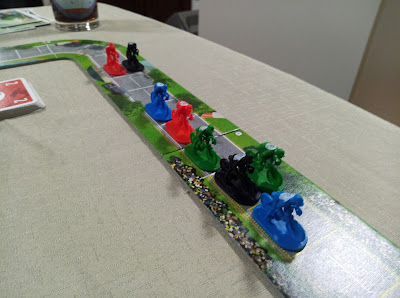 On the next turn my rouleur, who had a bad card draw on the previous turn, found his stride and swept over the line for a fourth place. Red ended up at the back, having nothing left in the tank after their earlier fast run. 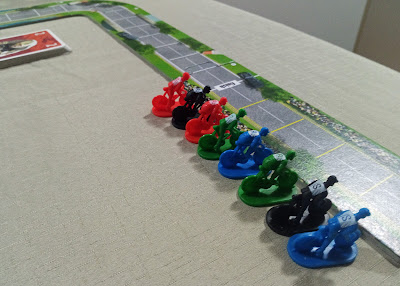 And so the final scores!

So a win for the Red 'rouleur' (the Peloton team doesn't have individual roles, but it was the rouleur model), and the Red team overall. I was please to take third place with my sprinteur; sprinteurs have a tough time of it in this game, needing much better hand management and some support from the rouleur to be really effective.

Really keen to try a tour like this with three or four players now. The bot teams are OK, but the chaos of real human decisions would be much more fun.