Autumn is coming, so it's time to stock the larders with meat, ready for the cold months ahead!

I did a little bit of painting over the weekend, doing some new beasts for Palaeo Diet. They're still in the final stages of basing, so not ready for a game, but I thought I'd remind myself how to play yesterday evening, and ran a couple of basic mammoth hunts.

So, there are three mammoths in the centre of the table. 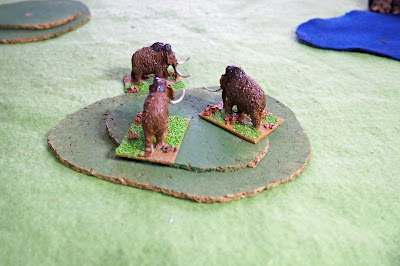 I used four hunters, one each of the basic types - Axe, Spear, Bow and Fire. I've not really used Fire that much so it was an interesting exercise from that point of view. 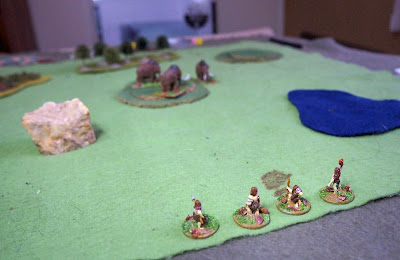 The goal was to take down one mammoth, preferably without losing a hunter.

The wind was from behind where the hunters entered, so I planned to use fire to drive them into an ambush. This meant that the bulk of the hunters had to work their way around the herd, whilst Fire stayed near the entry point. 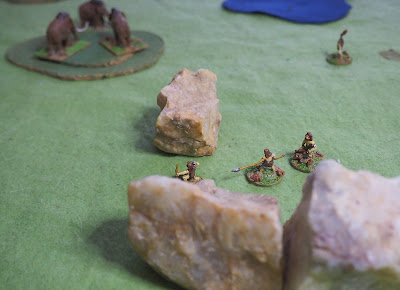 Bow moved out onto the flank of the herd, ready to shoot one which could then be isolated. 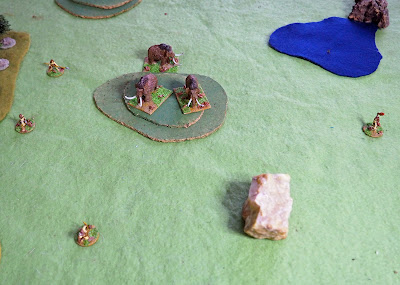 He selected a target and planted an arrow firmly into the vitals of one of the mammoths. 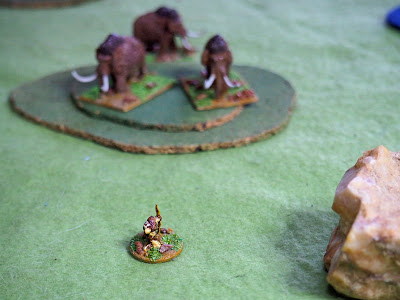 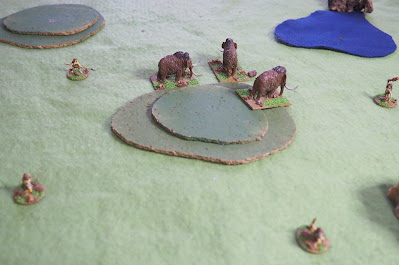 Fire moved up, causing mild panic, and splitting one of the mammoths off from the others. 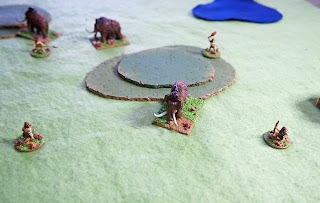 Bow shot some more arrows, driving the wounded animal towards the other hunters, whilst Fire moved onto the hill to prevent it rejoining the herd. 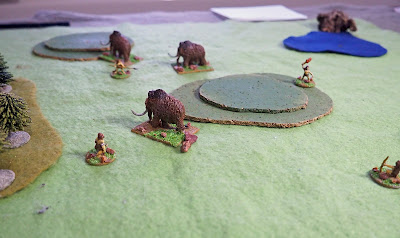 The mammoth was wounded again, and ran back and forth in total panic as Fire waved a burning branch at it. 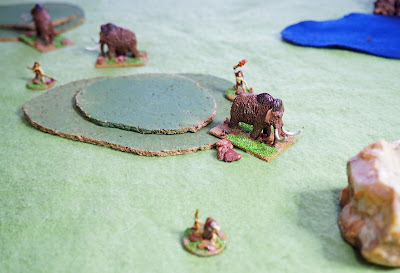 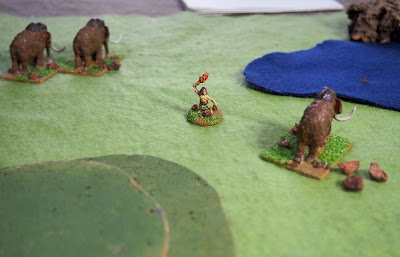 As the mammoth rushed around the hunters raced to catch up with it and deliver the coup de grace. 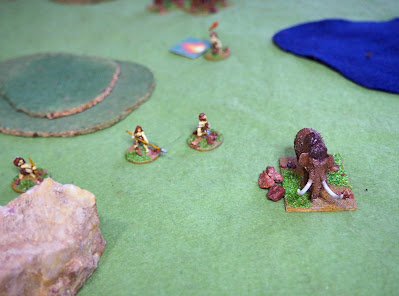 It attacked Axe, who evaded the charge. 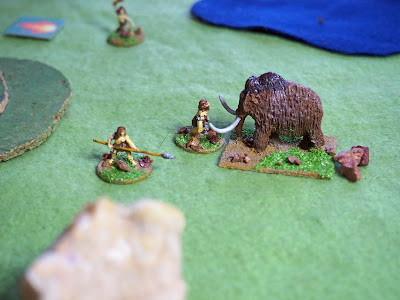 And it was Spear who delivered the killing blow.

In the background you can see that Fire had started a ground fire, the aim being to keep the mammoths from joining up. But it fizzled out pretty quickly. 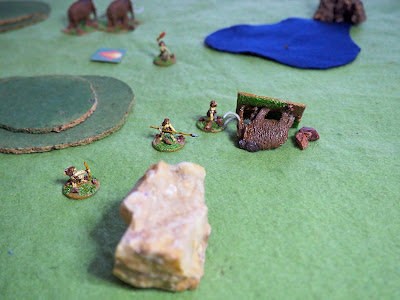 I set up a second game with the same terrain and hunters. Their random start position was in a corner, with the wind blowing towards them. Wind direction affects how fires spread. 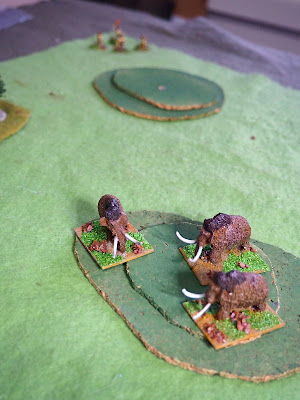 This time I complicated things by adding a pack of three wolves. However their random placement put them behind a wood and therefore somewhat out of the action since some of the reactions they use to get into the hunt rely on line of sight. 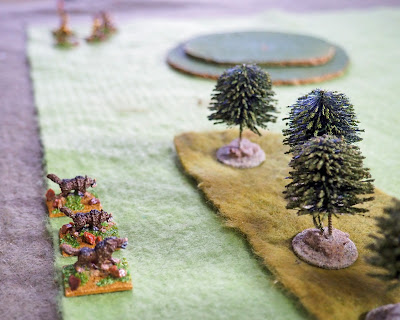 Again the hunters worked around the herd. Fire stopped off to set fire to the woods and keep the wolves away. 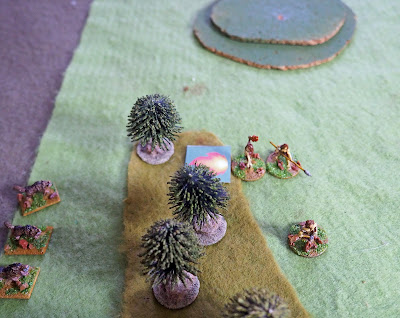 Fire then advanced and caused the herd to scatter, isolating one of the mammoths. 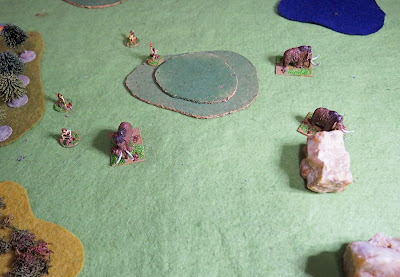 Axe closed in and made an attack, but missed. The mammoth retaliated and injured the hunter. 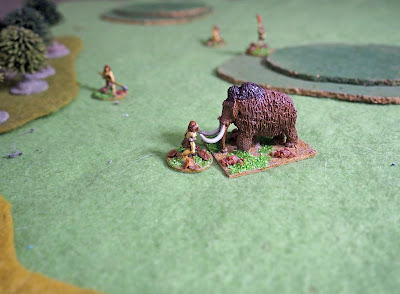 Spear inflicted a hit and the mammoth fled. 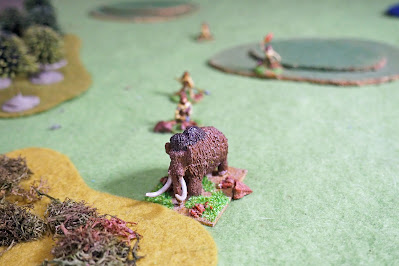 In fact it was getting dangerously close to the edge of the table, so the hunters had to tread carefully in order to drive it back into their territory. 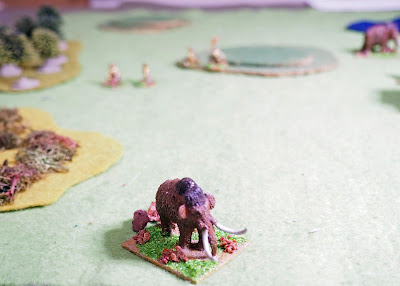 One of the wolves skulked through the woods, scenting the blood in the air. 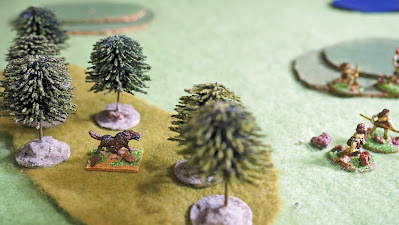 However it then scented Fire, and ran, with its companions joining it. All three wolves left the table. 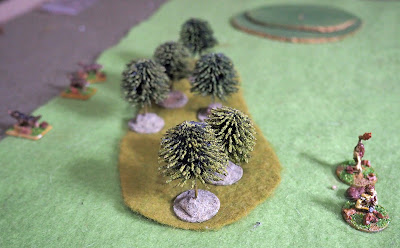 Whilst Axe and Spear stalked the wounded mammoth, Fire and Bow looked at driving the other two back into the centre of the territory in case the first mammoth escaped. 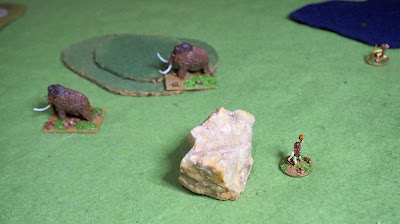 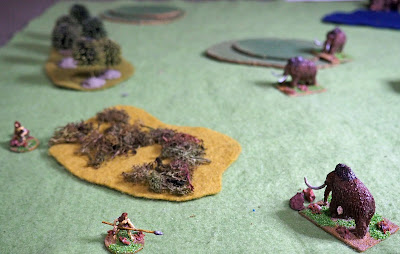 Fire did his thing, starting a ground-fire. 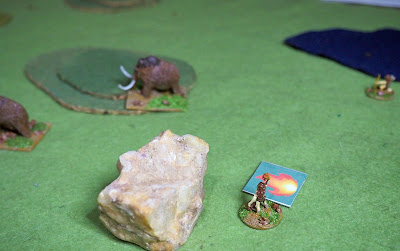 The mammoths shuffled away. 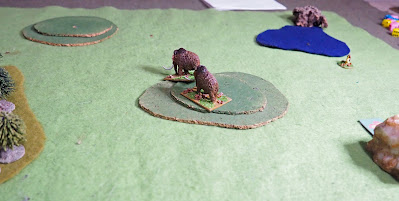 Spear closed in on the wounded mammoth and inflicted another wound ... 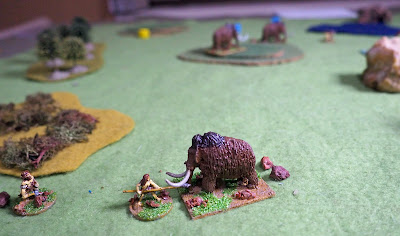 In the distance Bow had wounded one of the other mammoths. 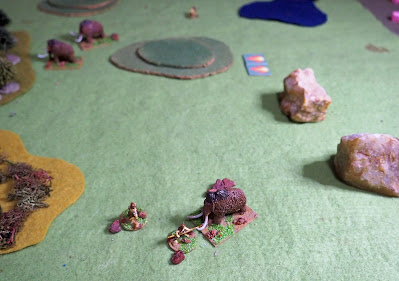 A desperate fight ensued, with spear evading attacks by the wounded mammoth, but not quite able to finish the animal. Axe tried to close up, but couldn't manage it; he backed off every time the wounded beast roared.

However eventually Spear prevailed, and the mammoth was downed. Fire was interesting to use. It's very powerful at driving animals around, but can be a bit of a liability since bad positioning or an unlucky activation roll can cause the animals to react to it before you're ready to exploit their panic. In the second game it was a great weapon against the wolves, but I think things would have gone differently had the wolves been more 'in play' at the start. I might try this setup again and see how the wolves make life more difficult for the hunters. And, of course, I have the bases to complete for the new beasts.
Posted by Kaptain Kobold at 09:48