In my last post I said I'd give the sabre-tooth a starring role in my next game.

Instead I tried an alternative set of stats for some of the other beasts I have - the cattle. They don't really feel like flighty herd grazers to me, but nor do they seem meaty enough to be giant grazers. So I went for something in the middle - run them as giant grazers for reactions, but with all of their stats downgraded by one (Savagery 5+, Resilience 4+ and Bulk 3). This makes them less dangerous and easier to kill than, say, a mammoth, but offering less in the way of reward.
Anyway, I sent out my band of five hunters after them. Since they are less bulky than mammoths I used more cattle - five to be precise. A wrong move could see multiple angry cows accosting an unwary hunter. 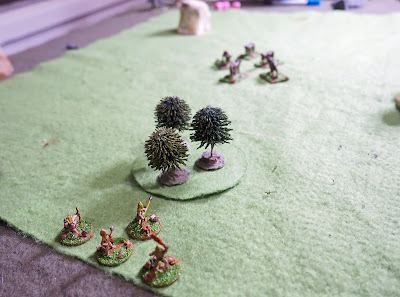 Here are the peaceful bovines, munching some grass. 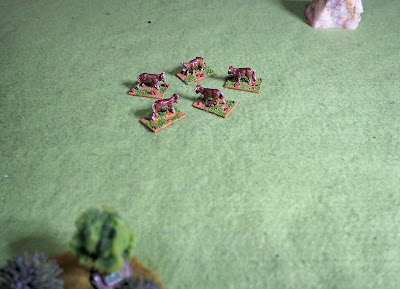 A sabre-tooth cat watched them from the other side of a thicket. It had a good view; if any were wounded in situ then the cat would advance and become dangerous. 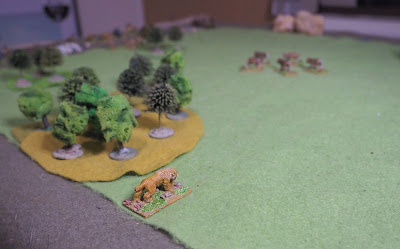 The hunters had to kill two bovines, so went for the standard strategy of isolating one and killing that. In addition Fire was sent wide to scare off the sabre-tooth, but also to keep the bovines from scattering too far in the one direction. 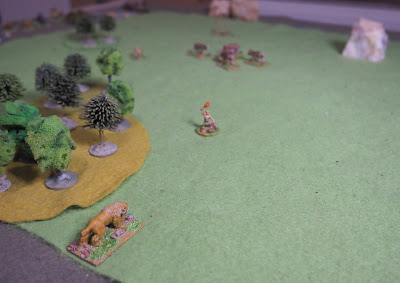 Bow set up in position on one flank of the herd, whilst Spear and Axe went round the other way. The cattle mooed ominously. 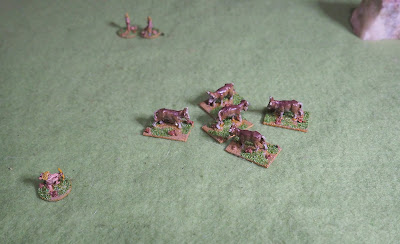 Fire lit some fires, but they quickly went out so he lit some more. 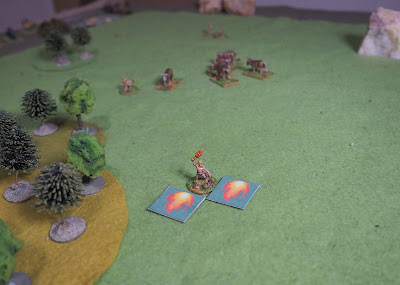 Bow shot at one of the bovines, and scored a critical wound. 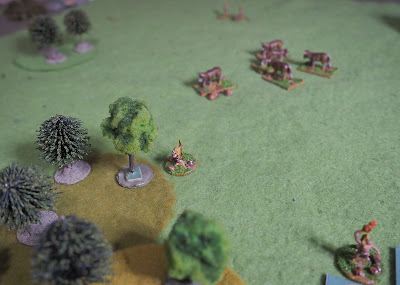 It panicked and ran towards Spear and Axe. 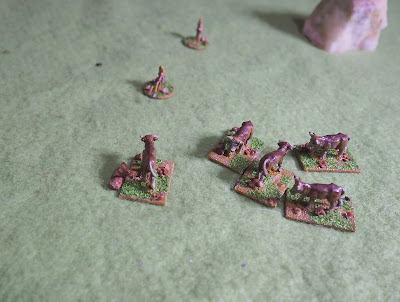 This excited the sabre-tooth which tried to edge past the fire towards the scent of blood. But the second fire was now spreading nicely. 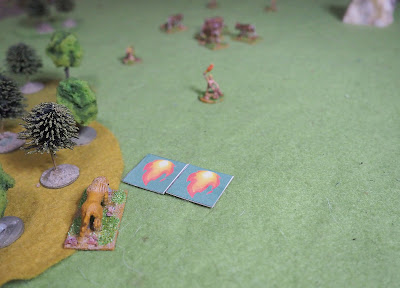 The wounded bovine was very angry, and it's lowing made the hunters cautious. 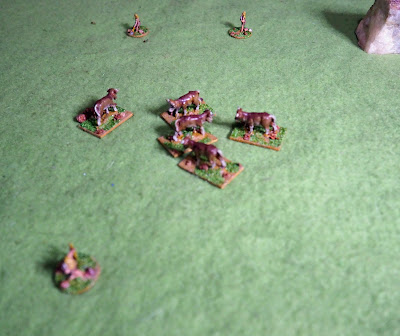 But eventually Spear rushed in and finished the animal off. 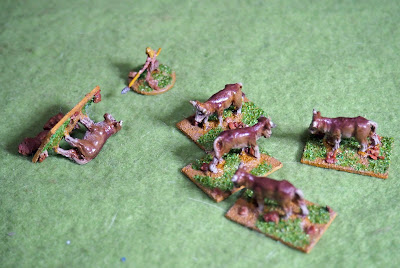 Not a clever thing to do close to the herd; two of the cattle, disturbed by the death of their fellow, charged him and Spear was wounded. 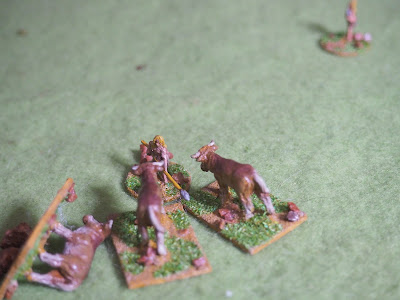 The sabre-tooth had almost worked past the fire now, and some bovines were scattering in his direction. 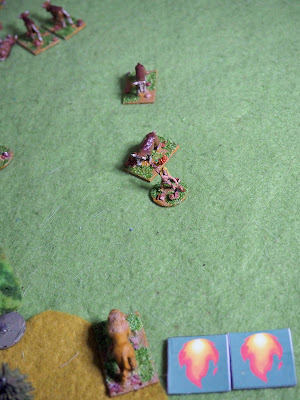 Fire waved a burning brand over his head and made some noise, causing the cat to seek shelter in the depths of the thicket, out of sight of the hunt. Only an extreme reaction would now bring it out. 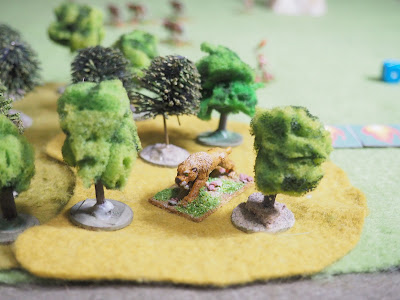 The surviving cattle scattered in response to the flames as well, and one was soon isolated from the others. 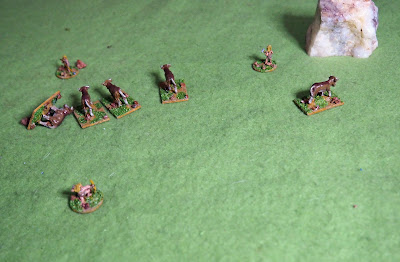 The hunters chased after it as it ran wildly in one direction then another. 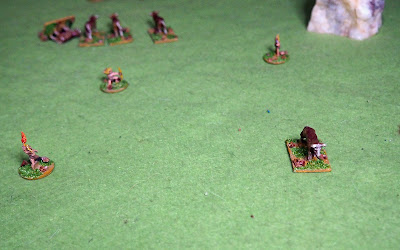 Spear found himself isolated from the other hunters by a wall of angry cattle. Wounded as he was a direct confrontation was not advisable. (Actually his activation rolls were terrible, and the cattle kept eyeing him up and 'roaring', keeping him out of the action for now). 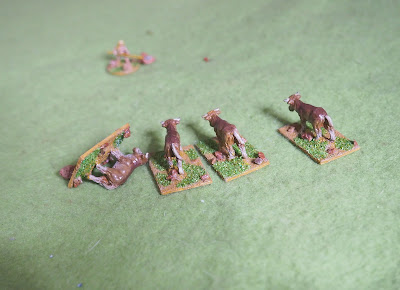 The isolated bovine was now really angry, and charged Axe, wounding him. 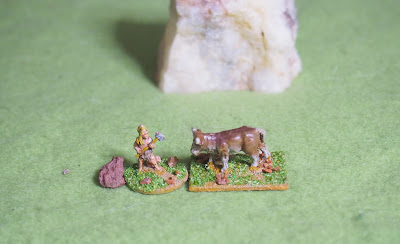 Axe scored a hit back, causing the enraged animal to attack Bow, who dodged out of the way. 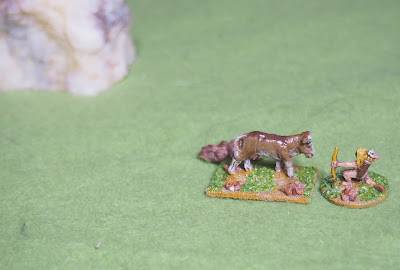 As it fled, Bow wounded it again, and it ran back into the herd. Spear tried to work around the herd to intercept it. 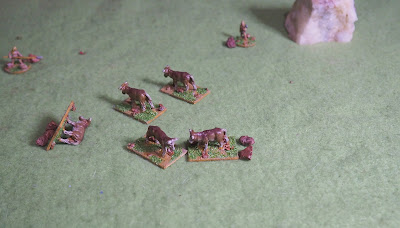 But Bow was running fast too, and brought it down with a second arrow, 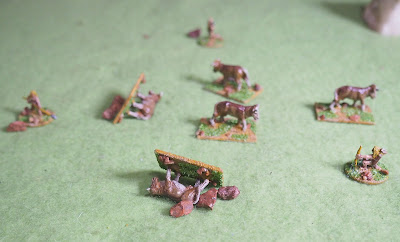 This caused the surviving bovines to react, putting Bow, who was close to them, at risk of an attack, but the cattle chose to run. 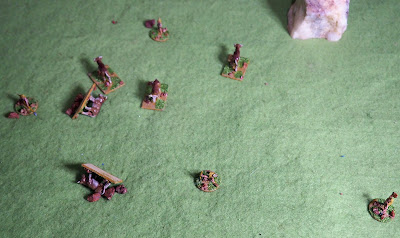 So the hunt was reasonably successful, with six Bulk gained against two hunters injured. This particular setup for the bovines worked nicely and I'll probably try it again.
Posted by Kaptain Kobold at 12:46