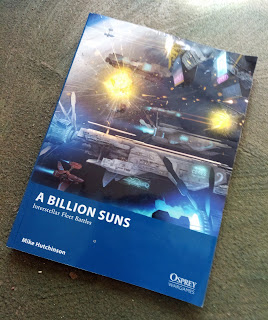 'A Billion Suns' is the new game from the fertile mind of 'Gaslands' creator Mike Hutchinson. Whilst I never got as far as actually playing a game, I have followed the playtest and development stages online for the past couple of years, and decided that I'd have to get a copy when it was released. It arrived the other day.

Sadly my copy somehow got caught in the flooding our area has recently, and was partially waterlogged when it arrived. Obviously I have raised an issue about this with the shipping company (and Osprey, just to be sure), but over a day or so I did manage to dry the book out and make it readable. It looks like it's lived a fair bit, but there's no serious damage.

Anyway, I sat down and read it properly over the weekend.

I haven't played it, so I'm not going to attempt a lengthy review. Basically 'A Billion Suns' is a spaceship combat game. Or, at least, it's a game involving spaceships. How much combat there is is partially up to the players. Because unlike other spaceship games I've seen, ABS is heavily mission-driven. Each player (the game is designed for 2-4 players) is the CEO of a far-future corporation, and you win the game by either having the highest profit at the end or, if things go badly for everyone, the least deficit. The game is set up with three contracts; twelve are provided in the game, with the promise of more to come. The contracts will dictate what terrain and other items will be on the table. Or tables. Yes, you read that right. Some contracts require you to add an extra table to the game. To be fair a 'table' is simply a playing area distinct from the other playing area, or areas. So you can divide up your classic 6' x 4' table in some way to do it. Each contract is worth a number of credits, with different contracts delivering that revenue in different ways and at different rates. Some are time-limited, so have to be achieved against the clock.

And that's it. You will have one or more tables with objectives spread across them, and a bank account with 0 Credits in it. The game then begins.

A CEO has access to a list of ship types, from fighter wings and light utility vessels, to mighty carriers and battleships. Each ship type costs credits and, during the course of their turn, a CEO will requisition ships and jump them into play in order to take on the various missions. Obviously you want to spend no more on ships than you think you can reap in terms of revenue, so there's a delicate balancing act between selecting what you need and selecting what you can afford. And if you need more ships later in the game? You simply requisition them. There's no concept of building a fleet at the start of the game and using that; you adapt what you have in play to the changing circumstances.

Once two of the three contracts have reached the point where they can generate no more revenue then the game ends, and the CEOs check their balance sheets and prepare to deliver the good or bad news to their shareholders.

What about the mechanics? Well, the game has a fairly daunting turn sequence, but it's broken down into fairly logical steps. CEOs first assign command tokens to their a Command Helm. These can be assigned to seize initiative, jump in more ships or used later to modify various game effects - give a group of ships a bonus move, or strengthen their shields against an attack, for example. The CEOs then take turns to activate ships or groups of ships, which move and then attack. Finally there is an end phase in which various admin tasks are performed.

Ships move in battlegroups, consisting of 1-5 ships of the same type. When a group is activated it is given an order. This allows the group to concentrate on movement, firing, damage control or jumping out of play. Movement is simple; a ship pivots by any amount, and then moves in a straight line up to its thrust value. A ship with Vector orders can move twice. Firing is performed by rolling a handful of dice, the type and number of which vary according to the weapon, looking to score less than the target's silhouette value. Each hit scores a fixed amount of damage, again according to weapon type. A ship may block hits with its shields. The shooting system is quite elegant; big guns score loads of damage, but are less effective against smaller ships because they roll bigger dice; a D6 blaster scoring 1 hit stands more chance of hitting a silhouette 3 fighter group than a torpedo rolling a D10 but scoring 3 hits. A ship's silhouette is also its damage value; the battlegroup accumulates hits until the value reaches a multiple of the silhouette, at which point a ship, or ships, are removed.

A nice feature of the game is Scale. This is a value from 1-10 which the players decide on at the start, and it is used to determine how many objectives a contract might have, which in turn affects the available revenue. Scale will therefore dictate how long and complex the game will be, and the available revenue will dictate, or limit, which ship classes will be viable. Deploying a battleship in a scale 3 game, for example, will cost more than the probable revenue you'll gain from the whole game; scale 3 games are the domain of fighters and light combat vessels. Scale basically allows you to pitch the game to your available time, miniatures and experience level.

This preview has really just scratched the surface of the game. There are lots of neat little rules and ideas tucked away in it, although I suspect that it is similar to games like Maurice and Saga, where there is something of a learning curve not just for the mechanisms themselves, but also how you actually play the game in order to achieve particular results. Some of the game is clever, but not immediately obvious, and a first time player has a lot to take in.

I'm not sure just yet when I will get a chance to play this game. I have a handful of scratchbuilt spaceships, but have put together some simple counters first in order to try it out and get a feel for the numbers of vessels I'll eventually require. You can see an example sheet here: 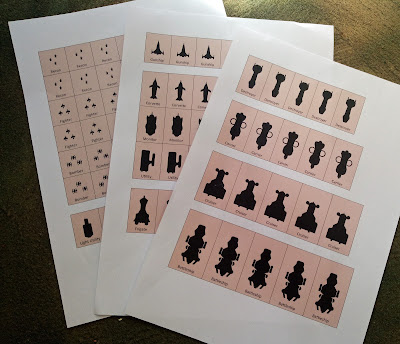