A Little Bit Of DBA

I thought we could do with a change of pace here, so I set up a game of DBA last night. Once again my Ceidonians (masquerading as Medieval Germans) took to the field against my Early Swiss. This is a tricky one for both sides since it depends on who gets to defend and whether the Germans can bring their knights to bear against the Swiss and ride down their deep infantry formations.

The Swiss defended and closed down the field with some difficult hills. There would have been more but they al ended up in the same quarter. In the limited space, the Ceidonians deployed with their infantry to the fore and their knights behind ready to swing out onto their left flank and bring the battle to the Swiss. 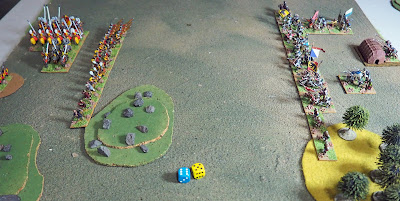 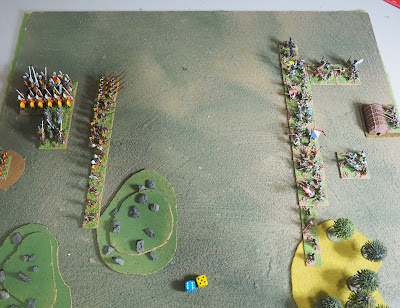 The Swiss sent their mounted crossbows to delay the knights whilst extending their infantry line. 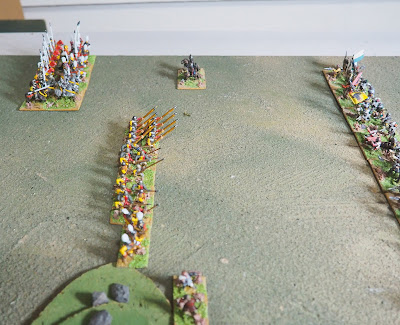 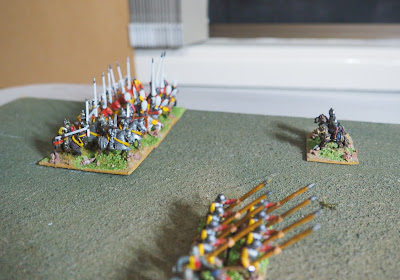 Once they were ready the entire Swiss army charged. 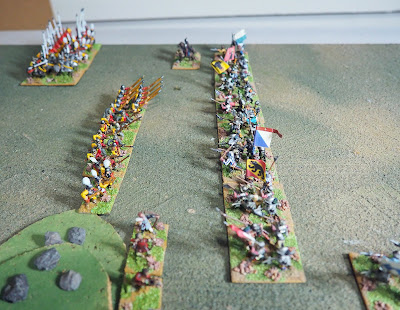 The Ceidonians attacked as well, scattering the Swiss light horse. 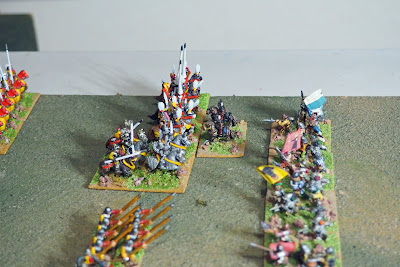 The Swiss smashed into the Ceidonain foot, which was mostly militia spear supported by pikemen and crossbowmen. 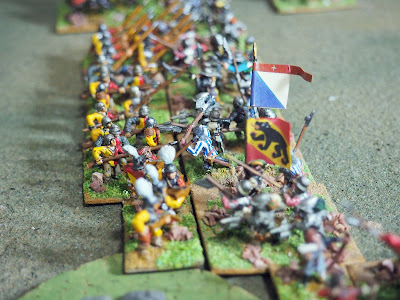 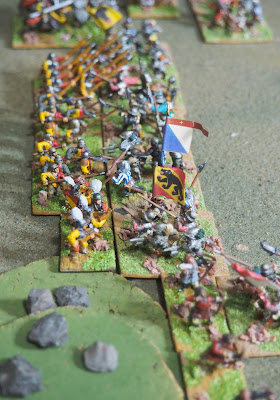 On the flank they attacked the Duke of Ceidonia himself, who had pursued forward of his supporting knights. 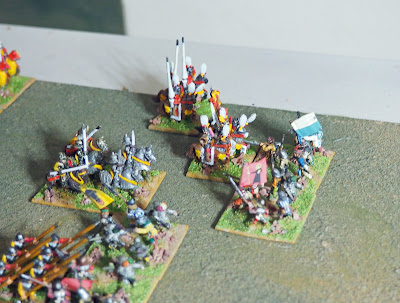 In a disaster for the Ceidonians he was unhorsed and butchered. 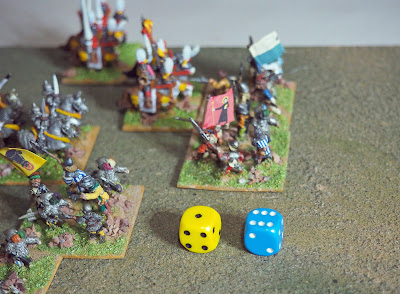 The Swiss also broke through the militia foot in the centre, exposing the flanks of the pikes and crossbows. 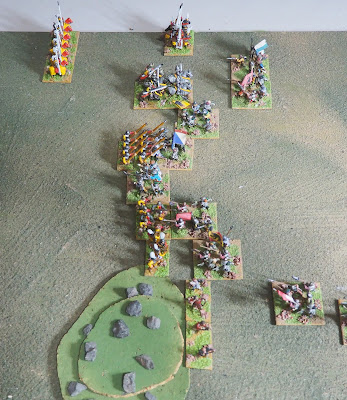 The Swiss turned left and right to exploit their breakthrough, and also pushed forward against the knights on their right. 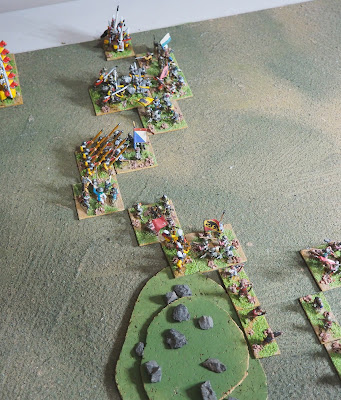 On the hill the crosswbowmen fell to the Swiss attack, and so did the Ceidonians deep knight wedge.
So the Swiss picked up a decisive win 5g-1 (and they also destroyed two hordes as well). 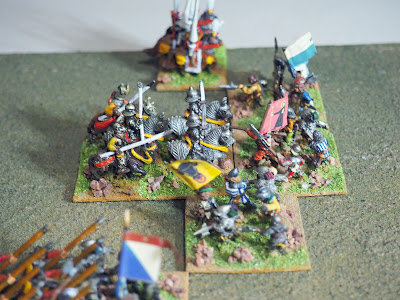 Since the first game was so short I set up a second one. This time the Ceidonians defended. 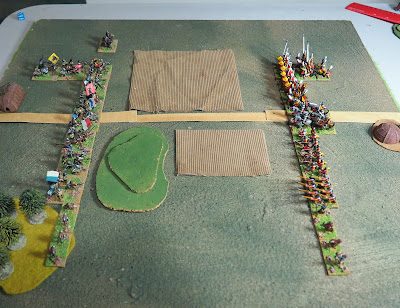 With no intention of messing around the Ceidonians simply charged with their entire force of knights. 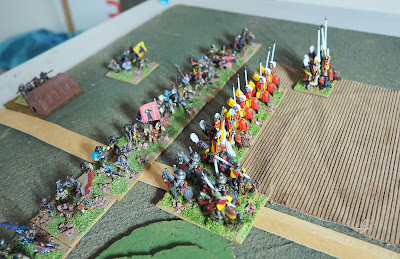 As the charge approached the Swiss line the Swiss countercharged, swinging around the Ceidonian flank. 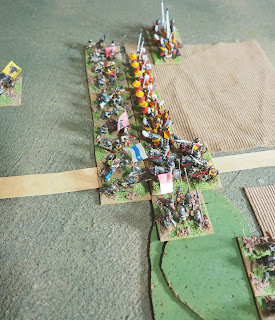 The knight wedge on that flank was routed, as were knights on the other end of the Ceidonian line. In one set of combats the Swiss had three of the four kills they needed to win (the wedge counts as two). 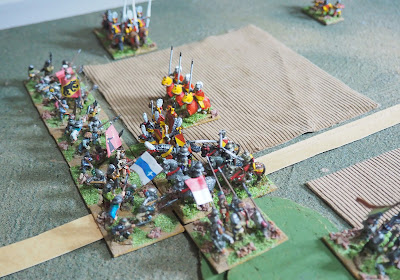 With nothing to lose the remaining Ceidonian knights, led by the new Duke, charged. 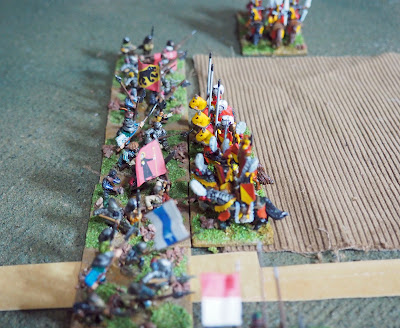 This time it was the Swiss who fell, losing two blocks of foot. One of them was the general. With the first block counting as double and the loss of the general, this broke the Swiss army. 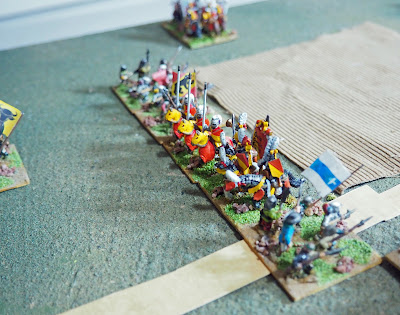 So the Ceidonians won a quick but narrow victory, 4g-3. 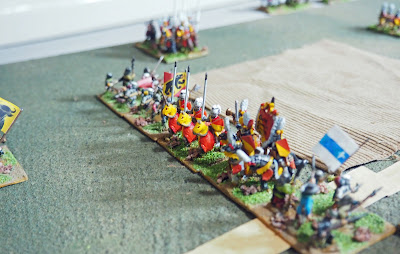 Double-ranked elements in DBA are quite fun, but make the army very vulnerable to sudden defeats. I'm not entirely sure how useful they are to the Swiss, since their primary advantage is when they fight foot, and most Swiss opponents (aside from themselves) are heavily based around knights. Still, they are fun to look at and use.