The Ghost And The Darkness

This is another HOTT piece from the original Stronghold. My only contribution has been my usual light editorial hand. The lists are based on the 1996 film of the same name.

Army Lists for 'Hordes of the Things'
by 'heath'

In 1898, two extraordinary lions went on a man-eating rampage that claimed over 130 lives. Nothing like this had happened before and it hasn't happened since. These two seemingly invincible beasts brought Britain's plans for an East African railway to a dead halt and literally stopped the greatest colonial empire on earth from one of its grandest engineering feats, absolutely cold. A bridge-building engineer, John Patterson, aided by an acclaimed wild game hunter, Remington, set out to find and kill these demons that the African's called "shaitaini" or "Devils of the Night." These two unbelievably cunning lions, "The Ghost" and "The Darkness," set their sights on the two men who were hunting them. Despite rivalry and animosity, the two men must trust each other with their lives to vanquish the two fearless man-eaters and prevent their frightened basecamp at Tsavo fromfulfilling its Swahili namesake--"A Place of Slaughter."

The “Ghost and the Darkness”

Stronghold: A cave full of bones

Special army rules:
Both gods can be deployed for 6 PIPs, but only a single one leaves the battlefield if a '1' is rolled. A god that has left the field may be returned by a subsequent expenditure of 6 PIPs. The army has no general's element. However no element in it is counted as being out of command.

The Army of John Patterson 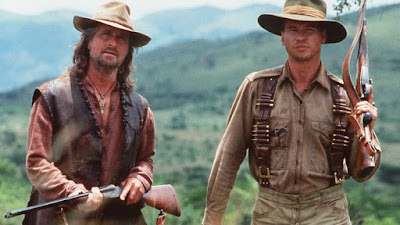 Stronghold: A train carriage on tracks surrounded by tents