A Lannister Always Pays His Debts

Kyran offered to demo a game of 'A Song Of Ice and Fire' last night, so I volunteered to give it a go. It's basically a Warhammer type game, with units consisting of trays of figures, and a pretty simple roll hits/roll saves combat system. At the back of it, though, is the 'period' chrome, in the form of characters and faction-specific event cards. This gives each faction a unique feel.

He set up a game with five units a side - I took the Lannisters with their strong armour, bags of cash but slow troops, whist Kyran ran the Starks, who are lighter, faster and fiercer. We would score points for holding on-table objectives at the end of a turn, and killing enemy units.

Here we are set up. 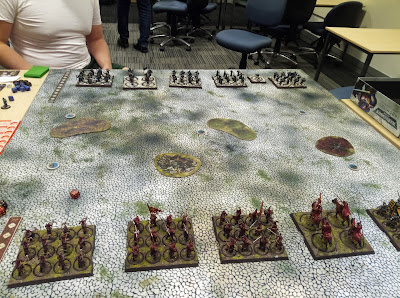 I'm not doing a detailed write-up, because the turn sequence means that a lot happens and the narrative is hard to remember now. Players alternate moving units or activating non-combat characters and abilities on a politics board. The latter can be quite useful, forcing enemy units to take morale tests or giving units extra attacks or moves. Each faction has certain areas of the board they play well into; mine for example, was strong as sowing dissent in the enemy ranks by demoralising troops, or bringing back friendly casualties via the famous Lannister Brown Envelopes Full Of Cash. 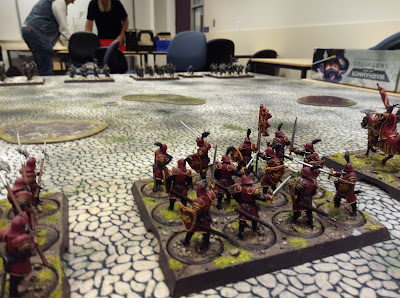 The alternating moves make for some interesting decisions, as you manage setting up attacks with trying to prevent the enemy doing what they want to do. Careful play of event cards can slow your opponent down, just as theirs can hinder you.

Getting in the first attack is key, as only the charging unit rolls combat dice; the defender doesn't hit back. Of course getting in the first attack is no good if your opponent can then charge you in the flank; that's what happened after this photos was taken - my knights shattered the Stark cavalry, but were then flanked by Rob Stark's personal unit and pretty much wiped out. 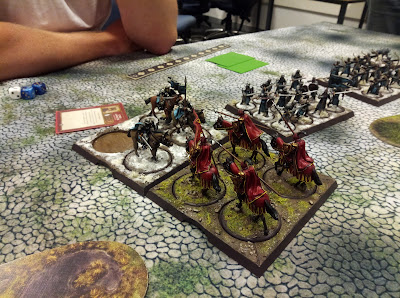 As the game went on I got a better idea of how to manage the various rules and resources. None of it is complicated in its own right, but there is a lot to think about, and it helps to have an understanding of not only your own side's strengths and weaknesses, but that of the enemy as well. 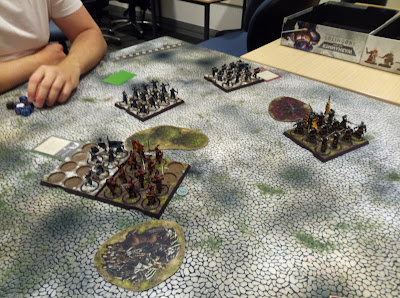 This was certainly one of my side's strengths - Gregor Clegane and the troops of his house; a truly potent strike-force, and one I spent a lot of effort on to ensure that he always attacked first. This first attack virtually wiped out  the enemy unit before it, as I piled advantages into the combat. 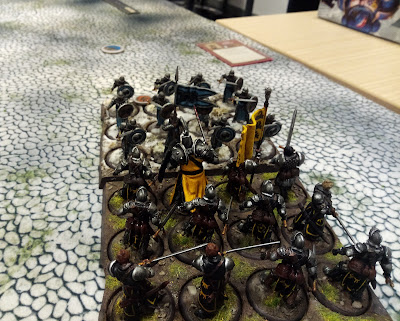 Anyway, I managed to pull off a win - I think taking out a unit of berserkers early on, helped; it gave me control of one flank and the objective there, for a steady flow of points. I was then able to plonk a unit of guardsmen - strong in defence - on a second, high-value, objective, and finally Clegane's troops killed things and grabbed a final objective. Cersei Lannister was my behind-the-scenes winner, using her influence to keep the Stark army in a near constant state of demoralisation.

So all in all an interesting game if you like your miniatures games mixed with some diplomatic/political boardgame shenanigans. Reminiscent of Saga in some of the gameplay, as the  on-table action is manipulated via off-table decisions, and it certainly captured the 'Game of Thrones' feel (although I admit I'm only familiar with the TV series). Certainly something I'd consider playing again one day.

And the figures are beautiful.