I wasn't going to let being on holiday stop my HOTT 52 project, so I transported a few HOTT armies around NSW as part of our camping setup, and managed to play a few games.

This is the official Week 42 entry; Catherine and I set up a game one afternoon in the small camp-kitchen at Peak Hill's caravan park. You can see our tent next to the tree in the left background of this first picture. 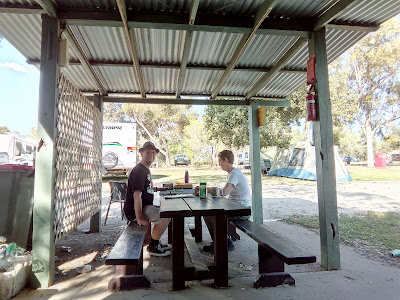 We did a 'classic' HOTT game - Elves vs Dwarves. Catherine took the former and I the latter. The elves defended. 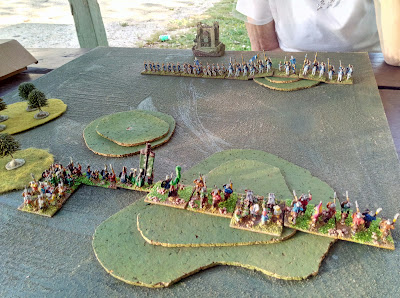 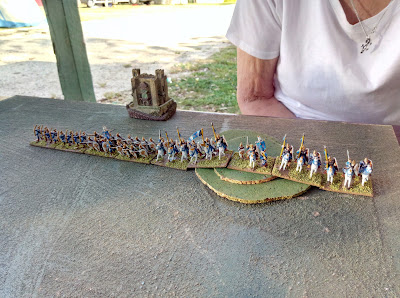 Catherine was a bit wary of my artillery picking off her hero general, so kept him back on the hill whilst charging her riders forward. 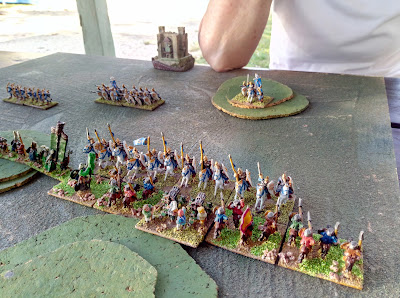 Such a bold, unsupported attack went exactly as you'd expect 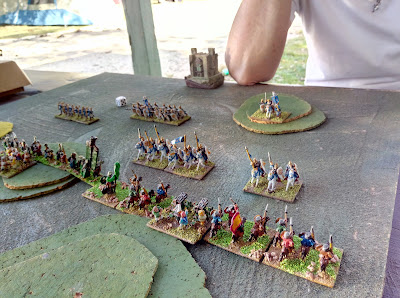 I pushed foward with the Dwarves, who were fairly well-equipped on the mounted front themselves. 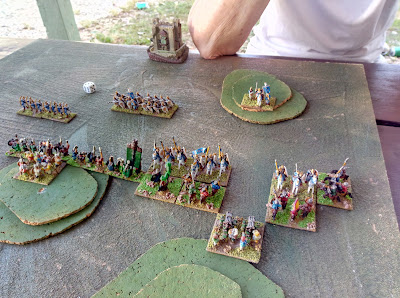 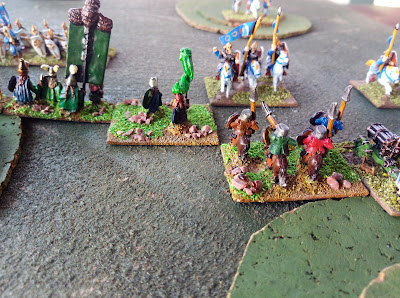 Catherine retired the survivors to the safety of the hill, and pushed her spears and archers forward, trying to work the archers around my flank. 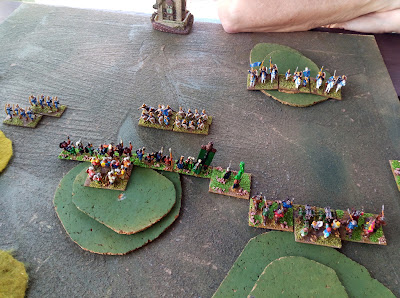 The spears failed to make any impression on the Dwarf line, so she gave them a hard stare. 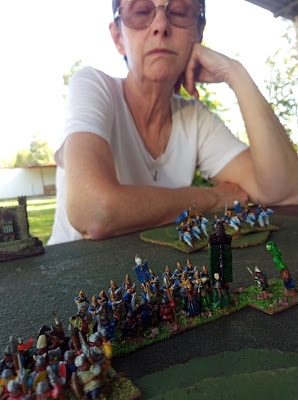 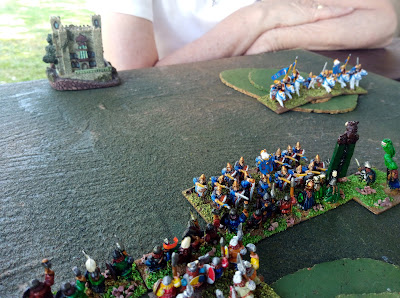 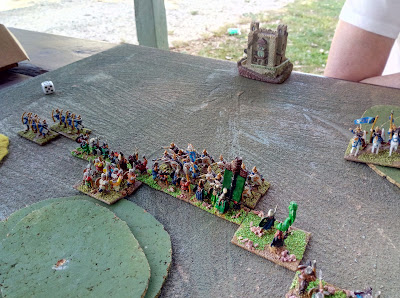 The archers found themseves pinned, whilst the spears, inevitable, found themselves overlapped. 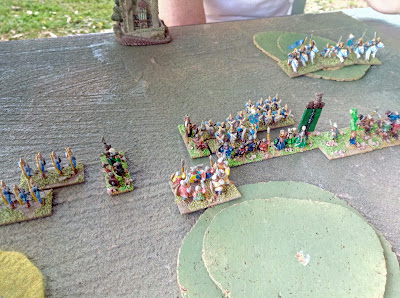 To add insult to injury the Dwarf artillery killed the Elven hero general. 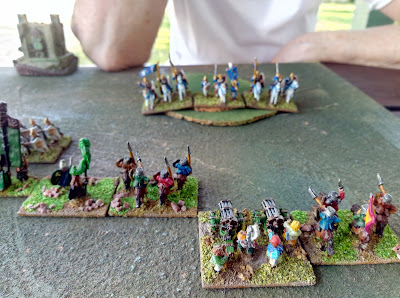 So that was the end of the battle, with the Elves having lost half of their army and their general. 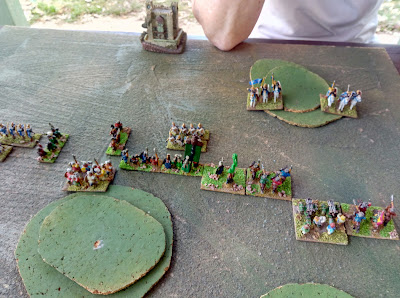 We played again with the same armies. The Elves defended again, and the terrain was similar but reversed. 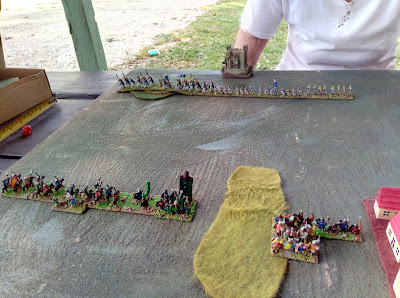 This time Catherine didn't mess around, and charged the Dwarven artillery with hero general; win big or die trying! 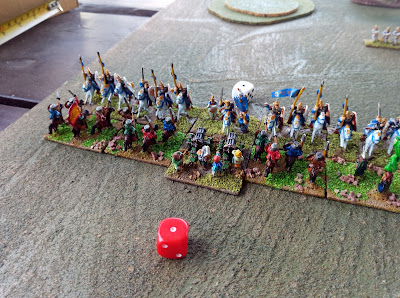 She pushed back the Dwarves along the line, and destroyed the artillery. 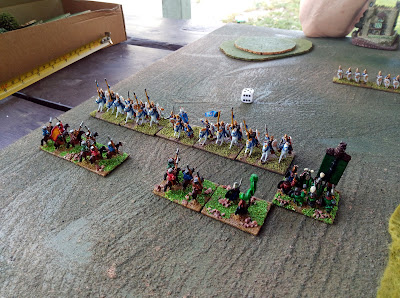 And then kept attacking. 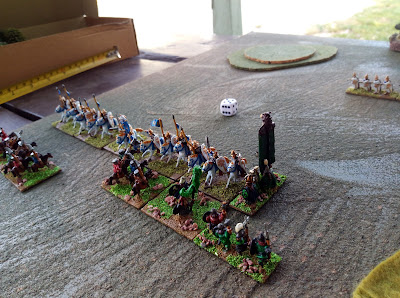 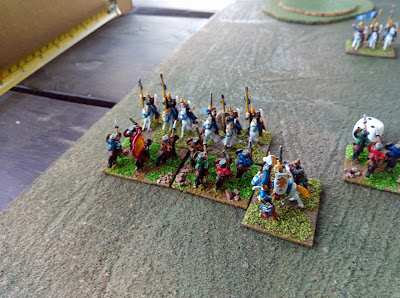 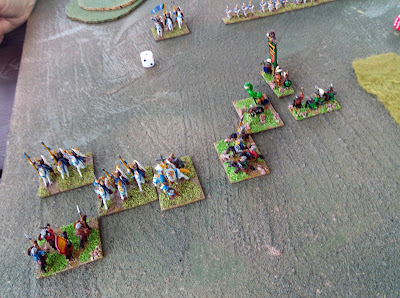 I tried to stabilise the situation. 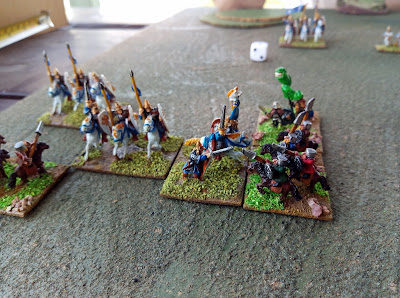 But to no avail. 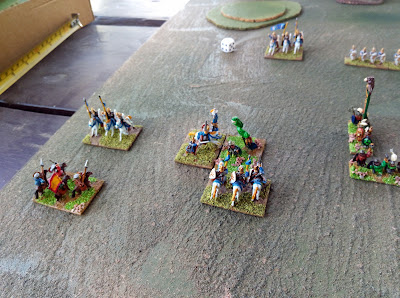 The Elves consolidated their position and came in on the Dwarves from all sides. 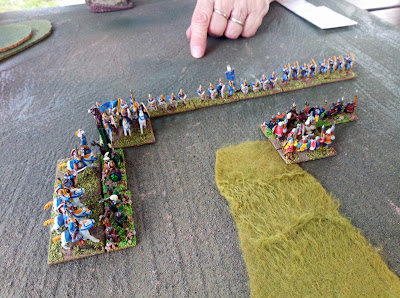 And that was a win for them. 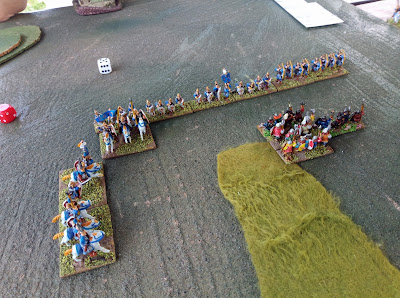 So we ended the afternoon with one win each.

I did play some more HOTT, but outside of the HOTT 52 project. I'll do that in its own post.