This week's HOTT 52 game is a Game of Thrones matchup, albeit an unlikely one, as the Wildlings from beyond The Wall attack Daenerys Targaryen's alliance of Unsullied, freed slaves and Dothraki horsemen.
The Mother of Dragons defended with a hero general (Ser Jorah Mormont and Ser Barristan Selmy in joint command), two riders, four spears, four hordes and a dragon (actually three dragons and Daenerys herself).

The Wildlings consisted of five warband, two riders (including the general) a beast, two shooters and a behemoth.
The terrain was relatively open; Daenerys's army likes open ground, and the Wildlings are good in rough terrain. 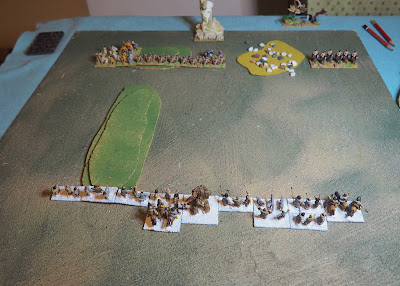 The defenders deployed - ex-slaves on the right, Unsullied in the centre and Dothraki wide on the left. 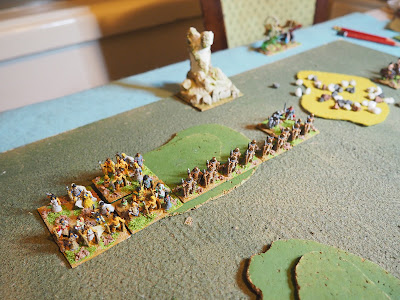 The imposing giant in the centre of the Wildlings' line. 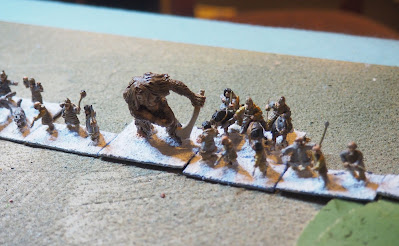 The Dothraki advanced quickly to hamper the Wildling advance, hopefully slowing it down to give Daenerys and her dragons time to appear. The Wildlings sent troops foward to screen their army from the wild horsemen. 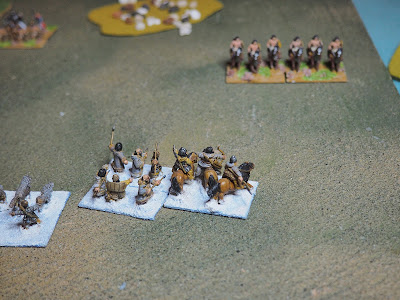 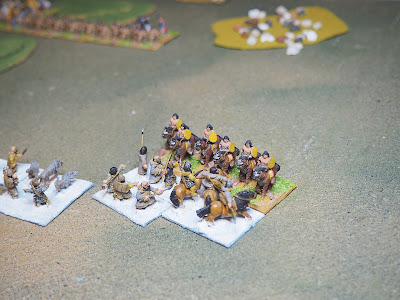 The Skinchanger beasts joined the fight, destroying an element of Dothraki. The other one retreated.

This action broke up the Wildling flank, though, and a PIP drought saw them fail to reorganise it. 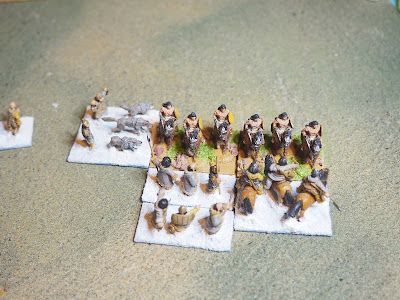 The main lines approached each other. 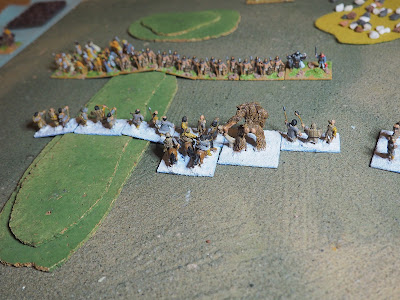 The surviving Dothraki skirmished out on the Wildling left, and avenged their comrades by destroying the beasts. 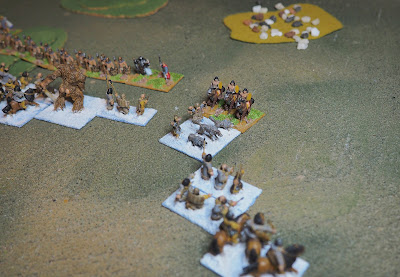 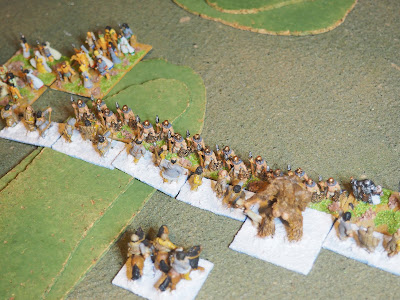 Results were mixed. Their archers did great work holding off the slaves on their left, whilst one element of Unsullied fell to a Wildling charge and another fell back in the face of an angry giant. But other Unsullied forced the attacers back. The game was at that critical point where both sides needed PIPs to reorganise and exploit advantages. 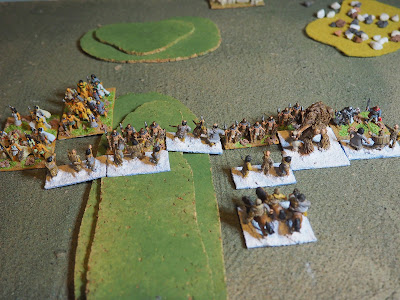 And that was the point that Daenerys turned up. Her army rolled a '6' for PIPs and had to decide riskig using them all to bring her on and give the initiative to the Wildlings, or exploit their advantages. They went for the former. 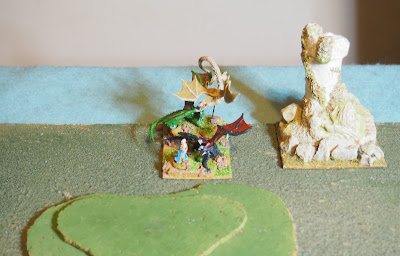 Inspired by their Queen's appearence the Unsulied rallied and slew the giant. 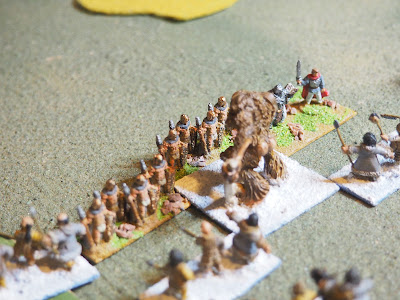 The two knights fought off the warriors facing them as well. 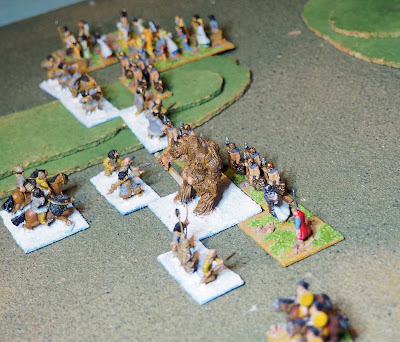 The three dragons swooped over the battlefield. 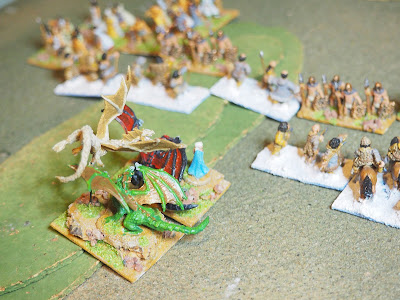 The Wildlings pushed forward again, and more Unsullied fell to their ferocious attacks. 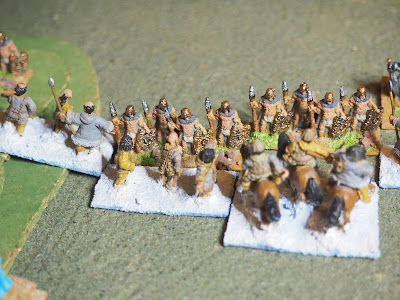 Daenerys led her children into the reas of the Wildling's general, as her knights and protectors led other Unsullied forward against them. The Wildling general and a group of his warriors found themselves forced to retreat into a mass of dragon-fire, and were lost. 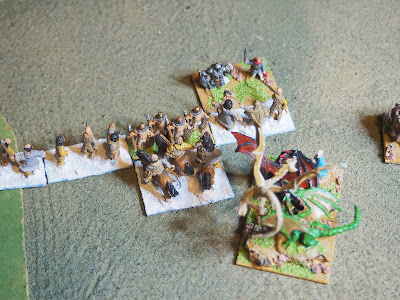 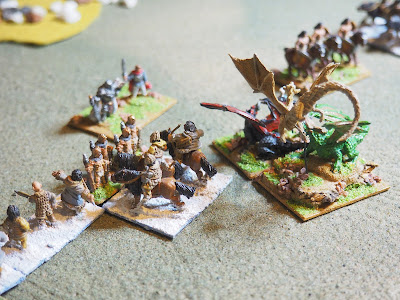 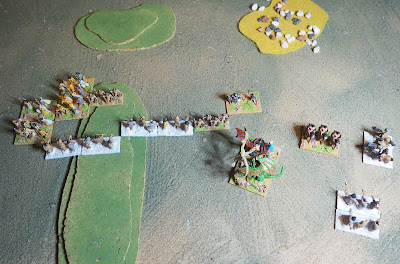 The Queen and her heroes. 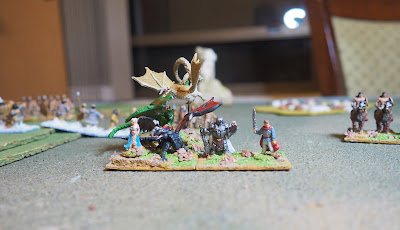 Surving Wildlings retreat from the field of battle. 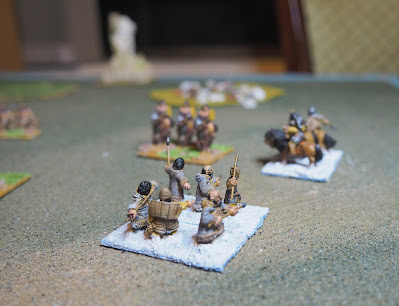 This was a brisk, but entertaining game. The Wildlings did what any good warband army should do, and skated on the edge of defeat the whole game, whilst slowly destroying the enemy army. To be honest, if the dragon hadn't have turned up when it did, I thik they would have won the day; they'd broken through in a couple of places and could have polished off the spears and hordes pretty easily given time. The gamble of using the six to bring on the dragon paid off.
Posted by Kaptain Kobold at 14:12