I hadn't seen my Inca HOTT army in ages, but pulled out the box the other day and decided that they'd feature in this week's HOTT 52 game. Geoff was looking for a club game, so I took along my South/Central American armies for an evening of feathers, obsidian and Conquistadors.
I selected the Inca, obviously. Geoff went for the Aztecs. The Inca defended, deploying a terribly anachronistic village (I just used the terrain I'd packed for my holiday).

Geoff got his feathered serpent dragon on the table on the first turn. 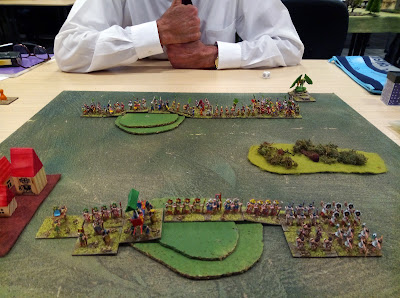 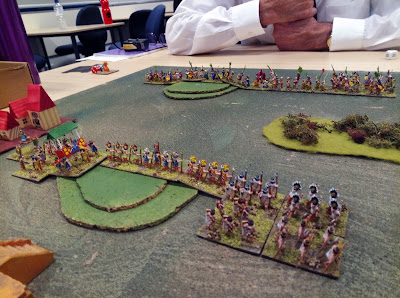 Both armies advanced as the serpent circled into the Inca rear. 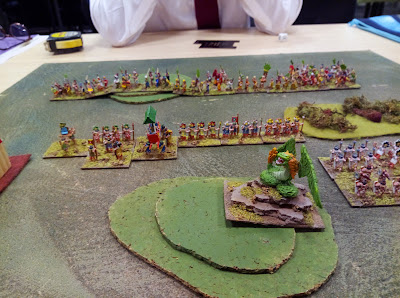 The Aucakpussak veterans (hero) engaged the serpent, and were held to a draw, but lesser Inca warriors joined the fight next bound and the serpent was slain. 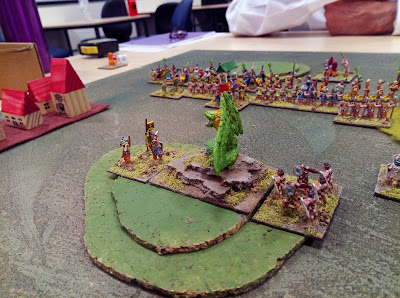 The armies met and the serious fighting began. 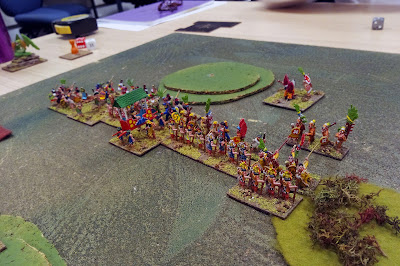 At first the Inca got the upper-hand, and quickly pushed the Aztecs close to defeat. 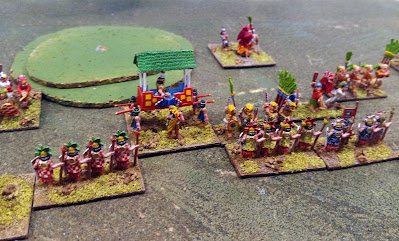 But as the lines fragmented, Geoff got a better run of PIPs. The Inca struggled to organise such that they could strike the killing blow, whilst the Aztecs kept up a steady pressure on their opponents. 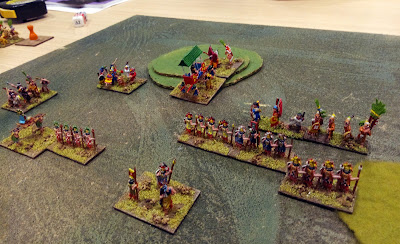 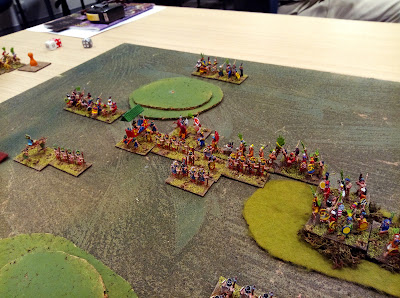 ... and the Aucakpussak were surrounded and slaughtered. 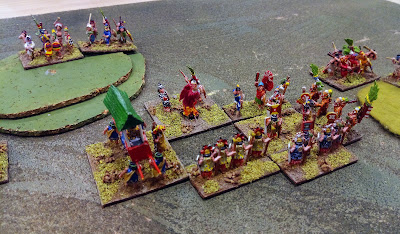 I fell back, reorganising my line and looking for an opprtunity to hit back at the Aztecs. Geoff did a great job using his numerous hordes to limit my movement with their threat zones. 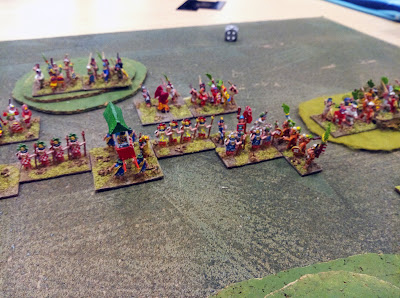 My hordes were boxed in by a patach of bad going, and had done little in the battle so far. 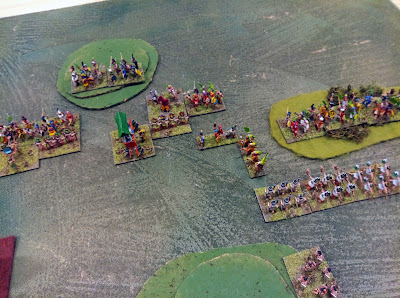 Hordes vs hordes in bad going - a fight which saw base combat factors of zero and less. 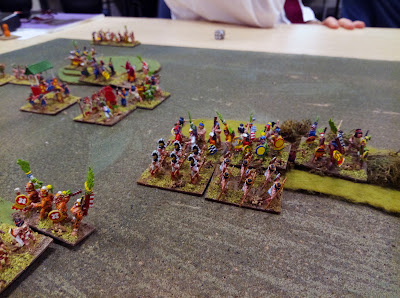 Things were looking dodgy for the Great Inca in his litter, as Aztecs closed in on all sides. 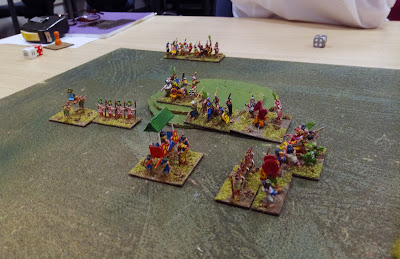 Both of us were staving off defeat by bringing back hordes. In the middle of this picture you can see Geoff's Jaguar Knights carving their way towards my stronghold. 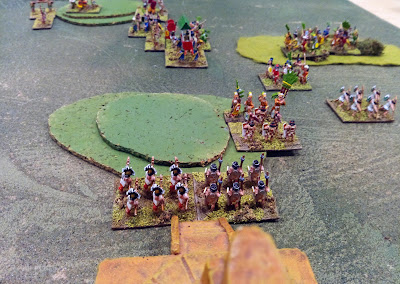 Some neat side-stepping by the litter bearers put them on the flank of the Aztec general, supporting an attack by the surviving Inca regulars. And the Aztec general fell, giving the Inca a narow victory. 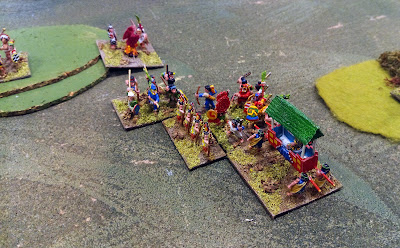 It was a very close game. I thought I had a quick victory on the cards at the start, but couldn't finish Geoff off in the middle. He cam back fighting and pushed me to the brink of defeat. The end-game was lots of desperate shuffling as we both tried to inflict critical kills on the other. HOTT at its best.
So that was my HOTT 52 game dome for the week, but we had time for a second game (albeit that this first one took well over an hour to play). I carried on with the Inca, whilst Geoff switched to the Conquistadirs, who need some urget repairs (their angel has lost his wings - we need a George Bailey there - and their saint his banner).

The Inca defended again. I deployed that village again. 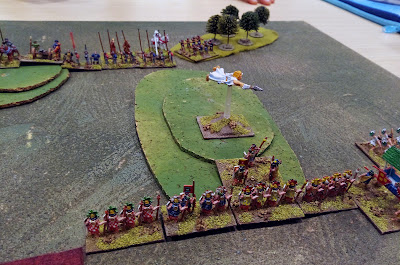 The angel got off to a great start, destroying some Inca blades from behind. The heroes then killed the angel. 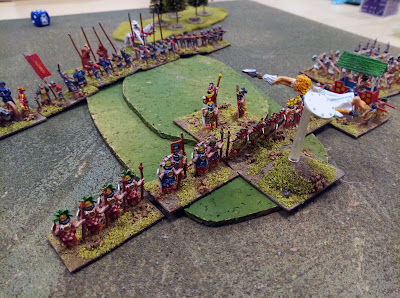 Geoff then sent in Saint James to kill the Inca heroes, but they did for him as well, despite his uphill advantage. 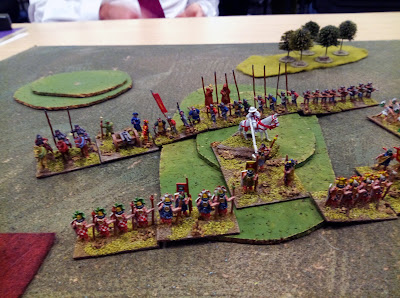 On the Inca right the hordes charged the Conquistador crossbows and arquebus, and paid the price, but they just kept coming in wave after wave. 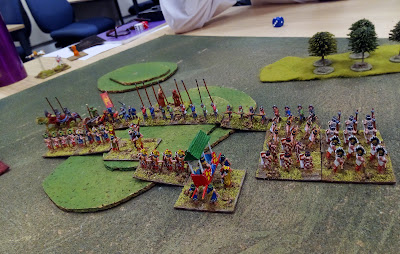 The armies met across the hill, and it was the Conquistador spears that held the attack, almost killing the Inca heroes at one stage. 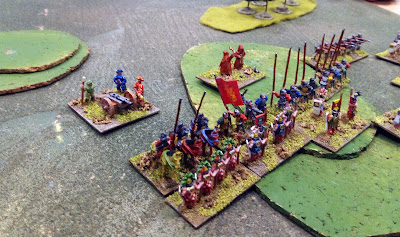 The Great Inca fell back, ready to face the threat of the Conquistador knights. 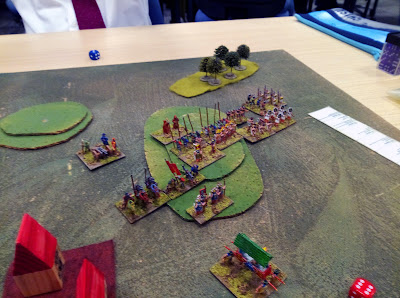 Geoff pulled the knights back into the village to try and disrupt the Inca's behemoth attack ... and they were ambushed by Amazonian ally lurkers, and wiped out. 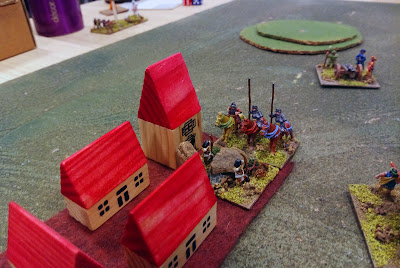 Shrugging off shots from the Spanish artillery, the Great Inca engaged the Conquistador general, and in a brief fight killed him, giving the Inca a second victory of the evening. 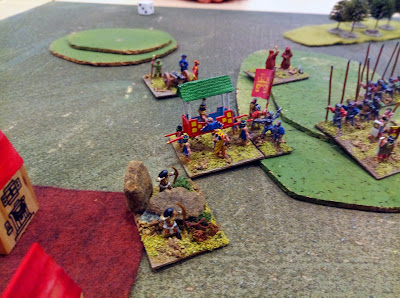