Catherine and I had a go at the Semi Heist mission in the 'Fast & Furious' boardgame last night. The Tank mission I've reported before is the basic scenario. This one is the intermediate.

We selected our drivers and vehicles. 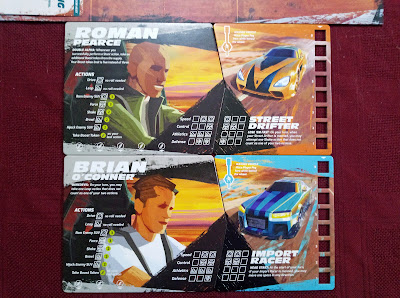 And here's the setup. It's based on the truck robbery in the first film. We win if each player gets two crates off the truck. But to get crates, someone has to be on the roof of the truck throwing them out to a vehicle behind. So the players need to take it in turn receiving crates and throwing them for another. It's a mission where you need to spend a lot of time out of your vehicle. 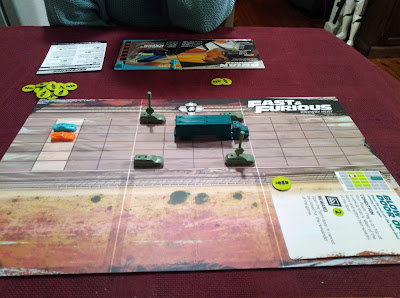 Both of our drivers have high Athletics scores, so are good at leaping around outside of the vehicles and completing the various special actions that the scenario requires - opening the truck's rear doors and throwing crates.
Here you can see Brian (blue) on the back of the truck. Roman (orange) is currently on, rather than in, his vehicle, and has company - an enemy that needs to be removed before he can receive cargo. 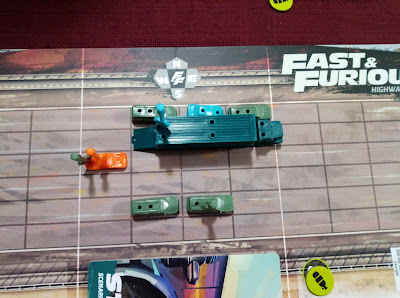 Brian efficiently delivered a couple of crates to Roman, then got back into his car, drove it under the truck and took up position at the rear. Meanwhile Roman prepared to get on the roof and lob crates down to Brian. 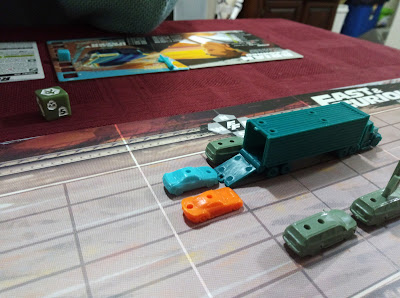 Roman in position. Things were looking good for us at this stage. One car was fully loaded, albeit driverless, whilst we stood a chance of delivering the goods to the other. 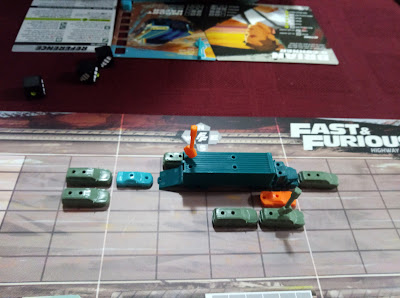 Unfortunately it wasn't to be. Catherine's choice of car for Brian was the Import Racer, which is very nippy, but made of  cardboard when it comes to taking damage. The enemy SUVs rammed it mercilessly, and it was wrecked. 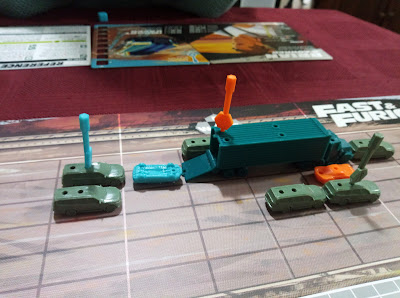 Roman had to hang about on the back of the truck whilst Brian hijacked an enemy vehicle. And in that time the SUVs rammed his vehicle off the road as well. That cost us not only the vehicle, but the two crates I'd picked up earlier. We were basically back to square one. 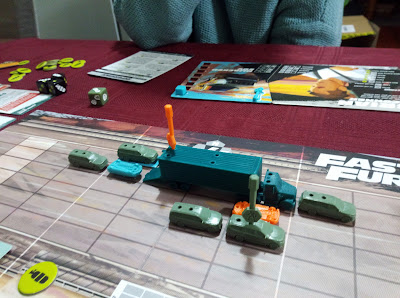 The problem is that, unlike the tank scenario, wrecking enemy vehicles isn't a direct victory goal. So it's a lower priority task than simply robbing the truck. Unfortunately this makes it rather easy for the Enemy to stack up a load of active and aggressive vehicles, and they can really make life difficult for our heroes.
Roman hijacked an SUV (the one with the orange marker under it). Meanwhile Brian went for teh alternative strategy - stealing the truck. This is an option triggered by the final stunt card, and basically involves goading the driver into shooting at you until he runs out of ammunition, at which point you hijack the entire cargo and win big-time. However you have limited time to do it and it's a trickier stunt than simply stealing crates. 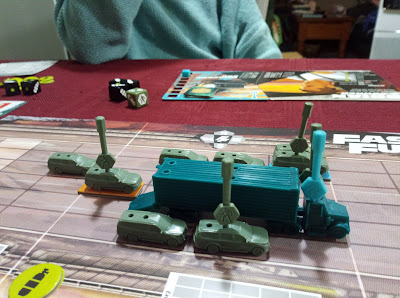 The other issue is that in order to do it you have to be out of your vehicle and on the truck. And the players lose if there are no active player vehicles on the board - and unmanned vehicles are vulnerable. Needless to say, Brian's stolen SUV was quickly wrecked, meaning that, whilst I could bring Roman in to help, I had to make sure my vehicle would survive as well. I sped ahead of the pursuing vehicles, and after Brian threw an enemy footsoldier off the roof to make space for me, leapt into action. 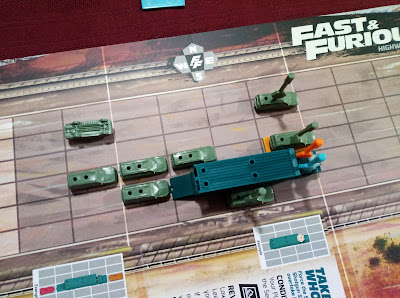 We got the driver to use up the last of his ammo. All I had to do was make a stunt roll to capture the truck. I had two goes at it ... and fluffed both of them. 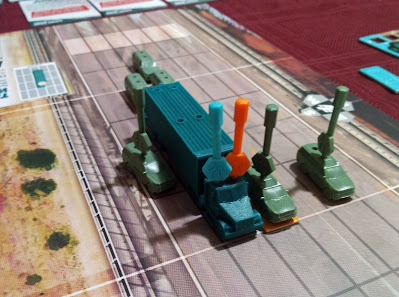 And that was it. We were on the last turn, so we lost the scenario. But it was so very close.
Next time we play we'll consider Capture The Truck as our primary strategy - wear down the opposition, and the driver's shotgun shells until the relevant stunt appears, and then leap into action. It's a risky move, but might work.
Posted by Kaptain Kobold at 10:46