I decided to try a more ambitious game of 'Giants' today, running four monsters. I used Tyrranix and Gakura again, using their stats from the rules (Atomic Reptile and Gigantic Gorilla). I added Mothra (again, there's a version in the book) and Gigan (using stats from a post on the Giants page on Facebook.

I set up a city on a 2' x 2' board, and ran the game with all distances halved. The scenario was a simple Last Monster Standing one. The buildings were just there to get in the way.

To start things off I randomly determined an opponent for each monster. The monster would attack that foe as a priority and then I would see how the game developed from there. In an amazing run of dire rolls, three monsters had Gigan as their target, whilst Gigan was focused on Tyrranix.

Gigan and Tyrranix approached each other along a street. The piece of card is a bridge. I need to make a suitable bridge. Tyrranix started the fight with an atomic blast, and Gigan responded with a laser shot. Neither monster did any damage to the other. 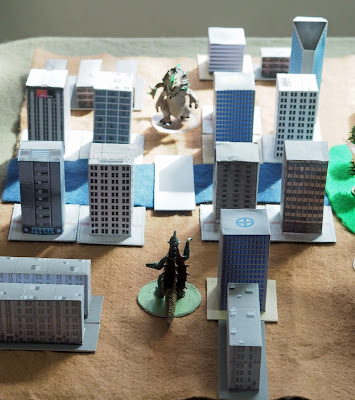 Gakura and Mothra were also approaching the fight now. Gigan was starting to look a little surrounded. 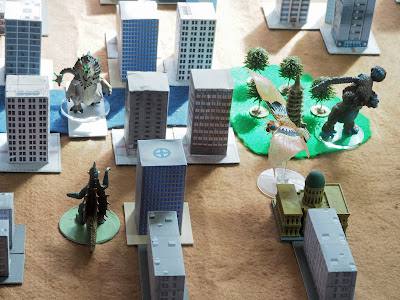 Mothra landed on a building, and tried to use her gust attack to blow Gigan away, but missed. 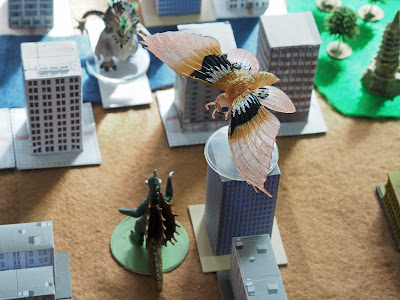 Tyrranix closed in as well, and also failed to hit Gigan, but Mothra managed a hit on the next turn, blowing Gigan into Tyrranix and knocking them both down. 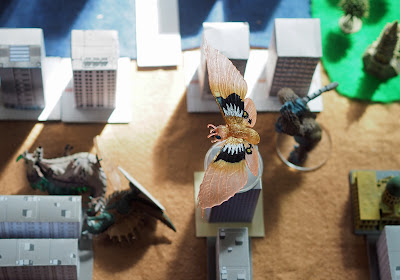 They were both soon up and fighting, and Gakura now joined in. Gigan was under a lot of pressure at this point and, being trapped in a corner, had nowhere to run.

You can see that some of the buildings had been destroyed at this point. 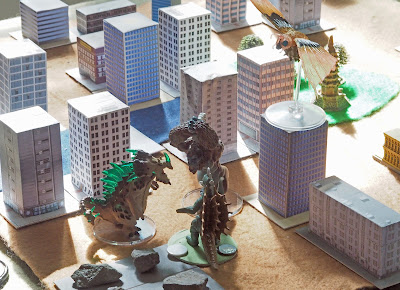 Gakura set to work on Gigan, knocking him back into buildings and through the resulting rubble. Mothra was knocked off her perch as well.

Tyrranix took the opportunity to hit all three of the other monsters with an atomic blast sweep. 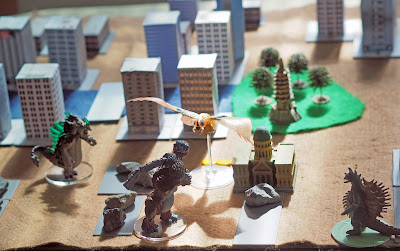 Gigan was now in real trouble. 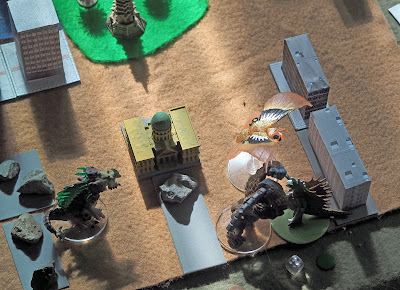 In fact he was so close to collapse that the mighty ape turned his attention to Tyrranix, leaving Mothra to deal with Gigan. 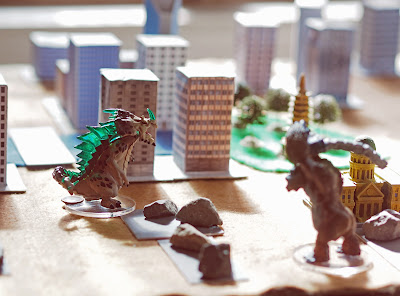 Mothra has no trouble - she has a powerful stinger attack which can use an opponent's stress to inflict extra wounds. Gigan had a huge stress total making Mothra's attack a knockout blow. The first monster had fallen. 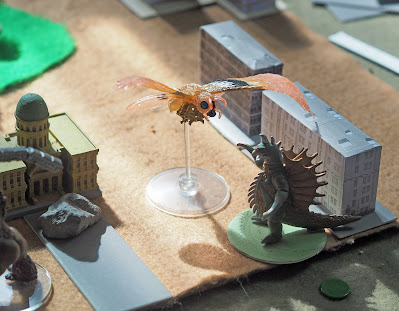 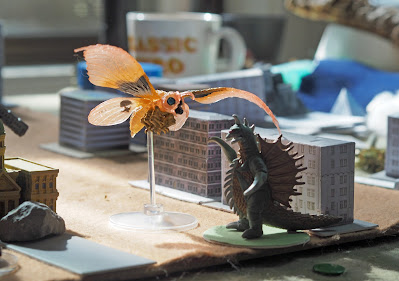 Mothra swiftly switched her attention to Tyrranix and Gakura, who had both battered each other to the point of collapse. 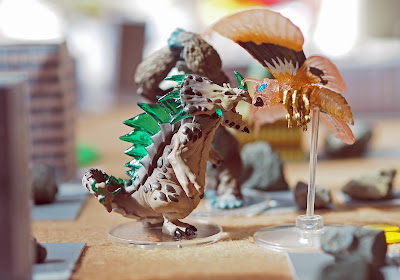 Tyrranix was swept away from the fight with a gust attack, and Gakura fell to Mothra's stinger. 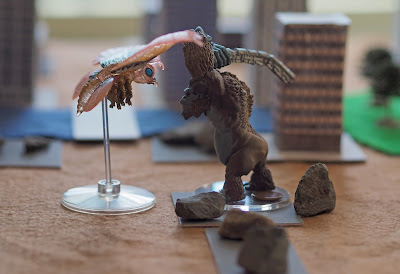 This left Mothra and Tyrranix facing off against each other. However Tyrranix was down to his last couple of wounds. Despite that he put up a tenacious fight, boosting his defences using his special abilities, whilst trying to edge around Mothra in order to gain enough room to use his atomic blast (ranged attacks in 'Giants' have a minimum range). 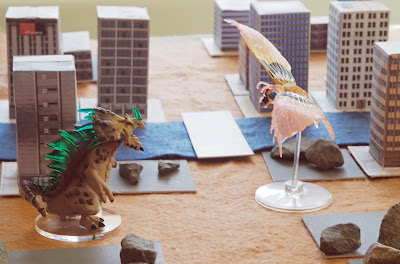 Mothra struggled to take down the big reptile, and was actually starting to take damage herself. But one final thrust with the stinger saw Tyrranix fall. 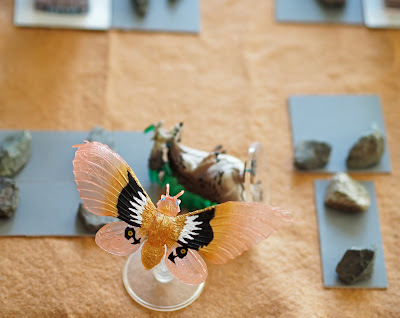 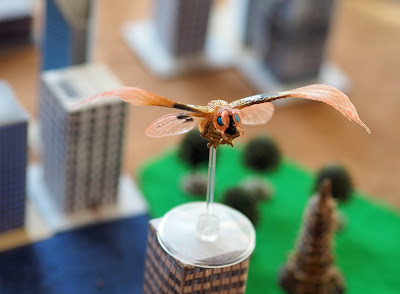 It took me a while to get going with the game; there are a lot of abilities to juggle and, it has to be said, I found looking up some of the rules tricky; things weren't always where I expected them to be. For the first half of the game it seemed that none of the monsters were going to do much damage to the others; they were making heavy weather of inflicting even one or two wounds. But as the game went on I got into the swing of things, and soon the damage began to mount. Obviously part of the problem for me was that I was running four monsters solo, so I had to hold a lot in my head.

Mothra's stinger is a very useful attack; she finished off three damaged monsters with it to win. Tyrranix's atomic breath was surprisingly good too; it has the Sweep option which allows it to hit multiple targets. Gakura  is nice and basic, with two useful melee attacks that  inflict steady amounts of damage over time, and a powerful knockback option. I never really got a feel for how to play Gigan, though. He has an attack like Mothra's stinger, that can convert stress to damage, but none of the monsters had enough stress to make it worth using before Gigan fell. The laser isn't a bad attack though, but Gigan was quickly hemmed in and never really got a chance to use ranged attacks.

Anyway, it was good fun, and I have a better feel for the rules now.
Posted by Kaptain Kobold at 16:20