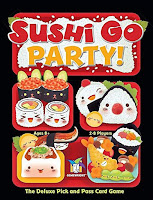 I've dropped the ball on the miniature gaming front over the past few days, because we've been busy playing this fun and simple card-game I got for Christmas.

I hadn't really looked at it because when I first got it out I found it confusing. But I had another read-through of the rules, saw what I was missing and realised that it's a very simple game indeed.

Basically the game is about collecting tricks and sets. You are dealt a hand of cards, and a turn consists of playing a card from your hand, then passing the hand to the player on your left, whilst receiving one from the player on your right. You play another card, then pass on the hand. A round ends when all cards are played at which point you score the various sets and tricks you have collected. A game consists of three rounds.

The fun comes in what cards actually make up the deck. The game is, as you have probably realised, themed around a sushi restaurant. Each game is set up with a menu, and the items on the menu are the sets of cards that go into the deck. The cards are split up into categories, and a menu will consist of one type of Roll, two Specials, three Appetizers and a Dessert. Every game uses the same set of Nigiri as well. The fun of the game comes with the number of different menus you can set up, as each one creates a different style of game and scoring, very much increasing its replay value. Some combinations offer high scores. Others offer simpler play. Some work better with higher player numbers (the game will handle up to eight. Some encourage interaction. Around ten sample menus are provided with the game, and players are encouraged to explore their own.

Here's a couple of pictures of the end of a game. We set up a menu using some of the cards we'd not tried before, so it was a bit of a random selection, but it seemed to give a good game. 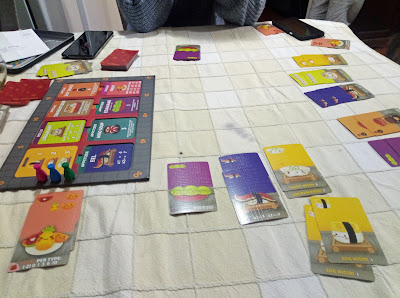 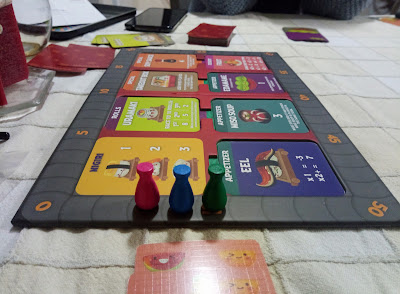 And a special shoutout to the artwork, which turns every type of food into a ridiculously cute character.

I can recommend this as a simple and fun family game.
Posted by Kaptain Kobold at 13:03