The fourth season of my HOTT campaign promised some interesting encounters. The initiative rolls were as follows:

The Undead were looking for an easy win and some resources, so went for the Orcs. The Swiss chose the Dwarves as their target, hoping to slice through their blades with a warband charge. And that left the Elves attacking Camelot once more.

The Orcs got to cover one of their flanks with some woods, but the Undead got the advantage of a hill. 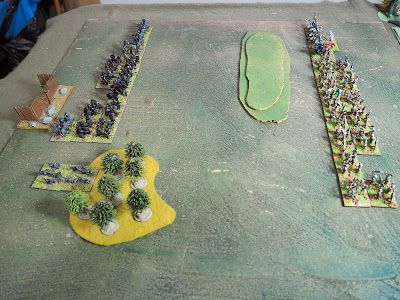 Obviously the Undead occupied the high ground. The Orcs swept in on their flank with wolves. 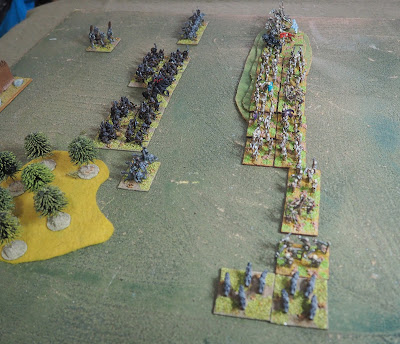 The Undead crumbled before them. Literally. 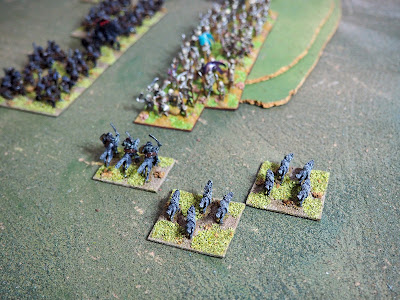 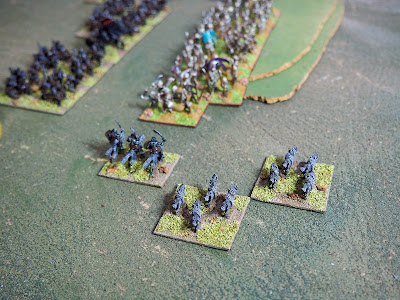 With their hilltop position now untenable the Undead attacked. 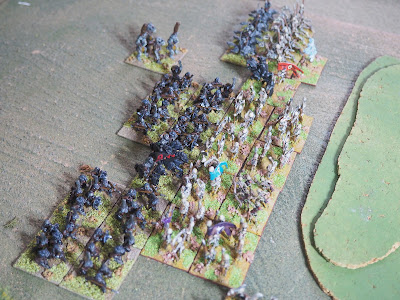 Their numbers were diminishing though. In the centre the Orcs' knight general was slicing his way through the opposition. 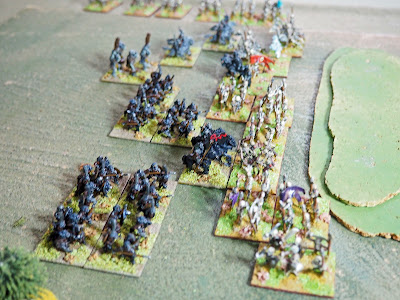 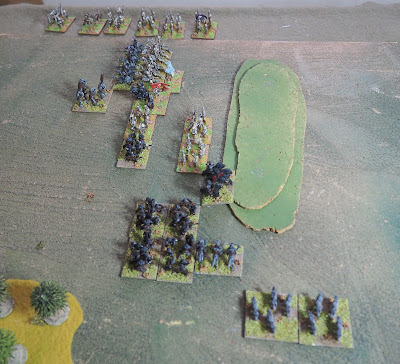 The Necromancer joined the fight, driving off some trolls. 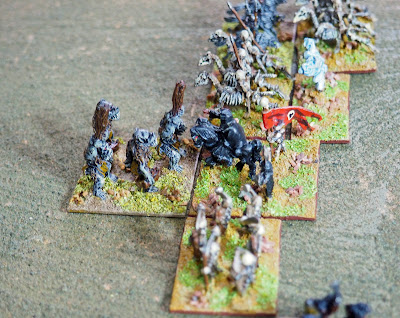 He was then able to turn on the Orc general, who was dangerously exposed behind the Undead army. The Orc general fell. 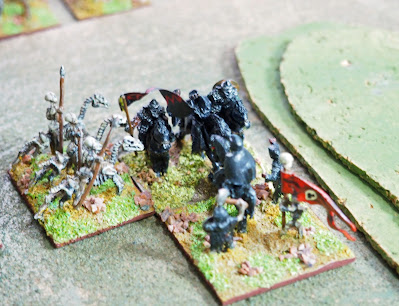 Undead losses had been high, though. Unfortunately for the Orcs, such losses could be replaced. And soon the Undead had fewer losses than the general-less Orcs. And that gave them the victory. 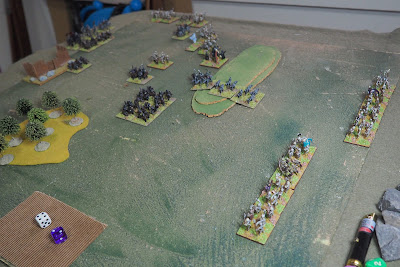 Bringing back hordes to win a battle 8g-4 is always cool.

The Undead gained +2 Prestige, and took a Resource from the Orcs.

The Dwarves had a strong position based around a couple of spurs. The Swiss would have to rely on a solid breakthrough somewhere along the line. 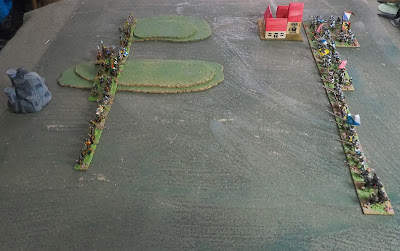 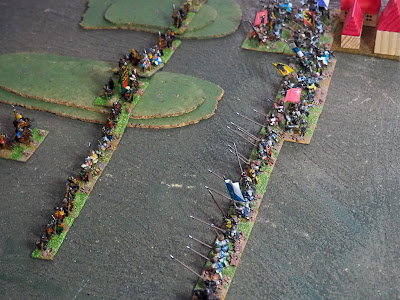 And in they go! 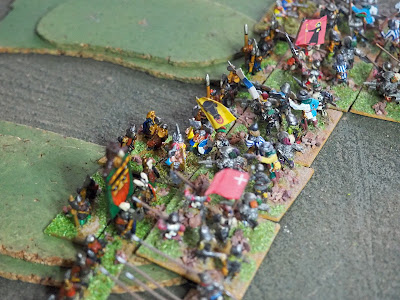 It wasn't a success. the Swiss attack was quickly broken up 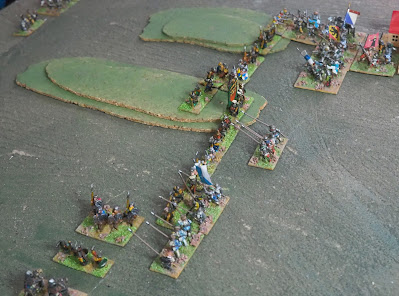 On the far right the Swiss kept up a steady attack, but the Dwarves were holding firm as well. 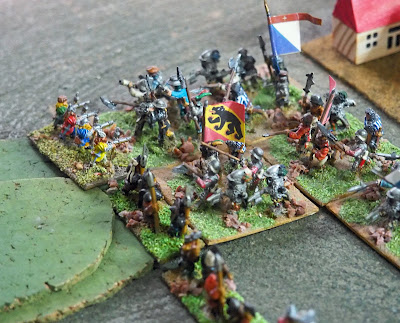 On their left though the pike formations were breaking up. 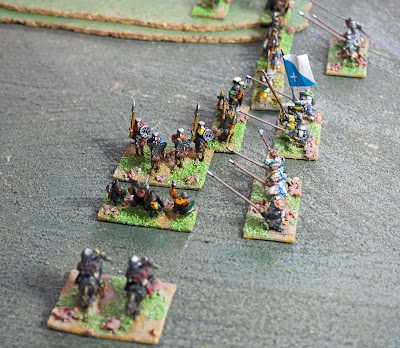 Once again the men of Bern break through the enemy line. 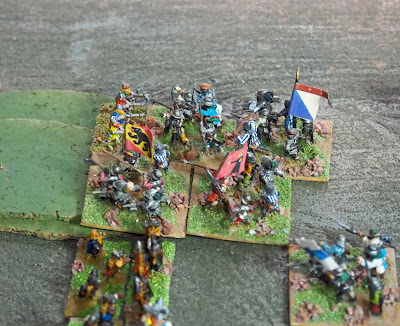 But it was too late. The Swiss general was surrounded and cut down by Dwarf axes. 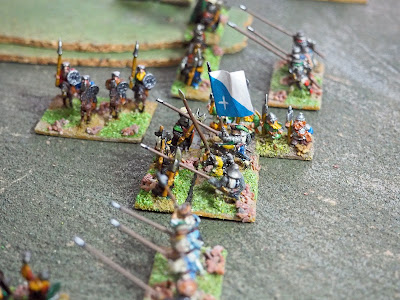 The Dwarves won 8g-2, gaining +2 Prestige.
Game 3 - Elves Attacking Camelot
This was a repeat of the Season 3 battle, but this time the Elves would not rely on a flanking attack. They went for a steady advance, replying on teh spears and archers to give their cavalry an opening. 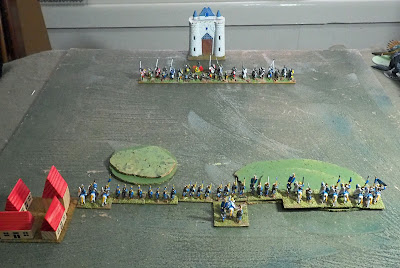 Camelot shuffled their line as the two armies advanced, covering their general with the paladin to avoid getting Arthur ensorcelled again.

The elven archers shot down some of Camelot's knights. A good start. 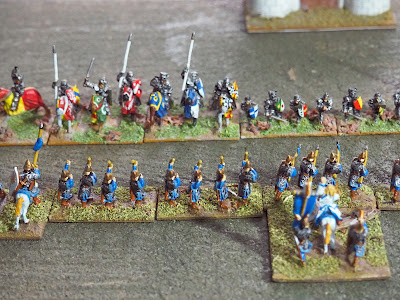 The two lines met. and at that stage I realised they'd both shuffled their lines so the the two hero generals were head to head. 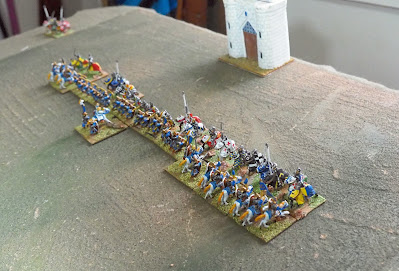 Hero vs Hero will always tend to end decisively. The Elves tried to juggle combats to get the advantage in overlaps, but when it came to it the overlaps were equal, and it went to a 50/50 roll.
The Elves lost, losing their general, and the battle. 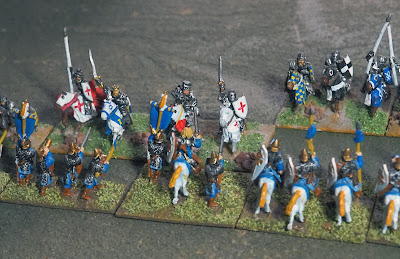 So at the end of Round Four, this is where things stand:

Camelot are beginning to look like clear winners, whilst the Orcs are putting on a dismal showing.