When it comes to online things I'm often late to the party. Which is odd, because in real life I'm very much not late to parties. I have a terror of being late and will generally turn up to things early. But I digress. Online. Late to the party.

So whilst kickstarters have been around forever I've never felt any desire to get involved with them (unless you count Eureka's 100 Club and so forth as proto-kickstarters).

But in the past few months I've finally gone for it, and backed two of them!

Neither are miniatures related. The first is a role-playing game that my wife and I helped playtest last year. We enjoyed it so I thought it would be good to support the final release. It's called 'Partners', it's for exactly two players and you can read about it HERE. Basically it's a game where you play a mismatched detective partnership trying to solve a murder, with the whole thing being driven by a deck of cards and random word-generators rather than a GM. It's very genre-savvy, and has a lot of great stuff on the way such films or TV series are structured. 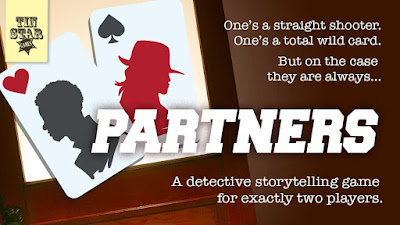 'Partners' is fully-funded, printed and all were waiting for is the book to be delivered. And the PDF was sent out ages ago. Worth a look.

The second one is 'The Gardens'. This is an Australian-produced boardgame with a nice Australian (or at least Sydney) them which basically involves constructing a version of the Sydney Botanical Gardens using cards, and having visitors stroll through it to score points. The local theme and the lovely artwork enticed me, as did the relatively low price. Plus the fact that it doesn't look too complicated. So I've backed it. I won't see it until some time next year, though. It's still going, and you can have a look at it HERE. 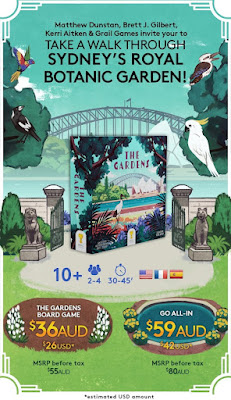 It's fully-funded, so if you back it now you'll be helping to make what looks to be a nice game even nicer!
Posted by Kaptain Kobold at 10:45