I did some limited painting the other day. When I did my Palaeo Diet figures I used a spray matt varnish on them that turned out to be a lot less matt than I'd expected, so a lot of the figures had an annoying glossy sheen to them. I currently don'rt have a usable can of spray matt, but I discovered a bottle of brush-on varnish the other day, so I sat down and gave all of my prehistoric collection the once-over. And since they were out I thought I'd play a couple of games.

A simple hunt is always the best way to begin. I ran three hunters against a small group of wooly rhinos. They just had to kill one. 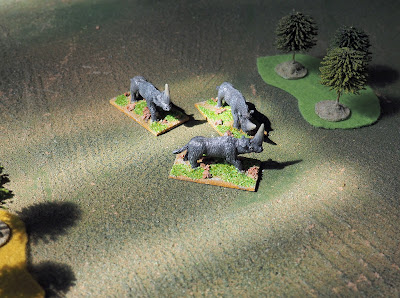 The one with the bow crept around one way, whilst the other two (Axe and Spear) waited for him to drive an individual rhino towards them. 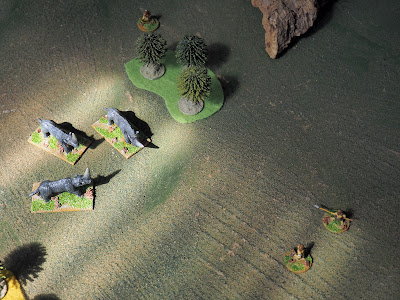 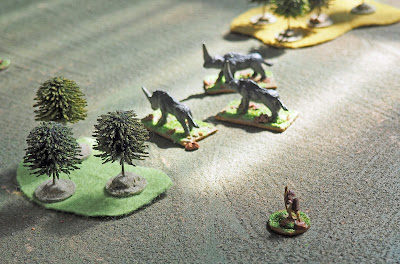 There followed some confused action as the entire group of animals slowly headed toward one of the table edges, whilst the hunters tried to keep the wounded one in place. 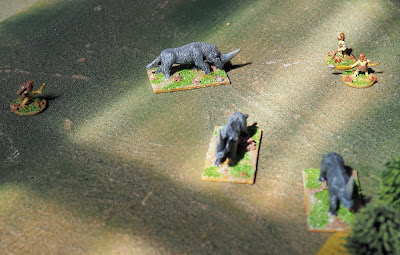 Bow got in another telling shot which critically wounded the animal.

Axe tried to get in to finish it off, but missed, and it ran, leaving Spear to rush in and administer the coup de grace. 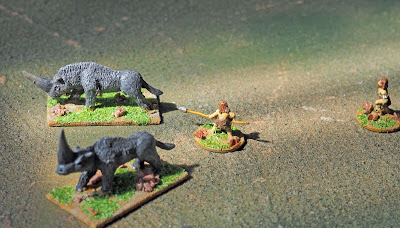 So a successful hunt; not being slightly shiny any more obviously helped the hunters.
I then set up one of the scenarios from the original game, in which a group of hunters are on a simple food-gathering exercise. They have to explore terrain pieces looking for fruits and berries (easy to gather), fungus (easy to gather but risky) and critters (harder to catch, but worth more in terms of food value). However there was also the risk that the terrain pieces could harbour angry critters, which fight instead of running away, or a predator (which are technically worth points as food, but obviously much harder to kill). Since this is basically a berry-picking expedition the hunters lose if they suffer any casualties.

The terrain consisted of a rock outcrop, two hills and a couple of woods. The woods offer the best possibilities in terms of finds, but it's harder to move around them. 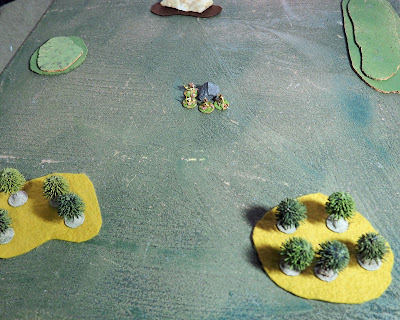 The first hunter to enter a wood disturbed a bear. Not a great start. 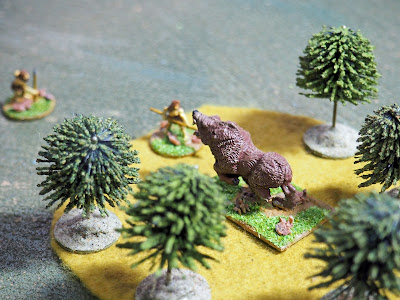 With one wood off-limits, the other three hunters checked out the other one, and quickly gathered some nuts and berries. 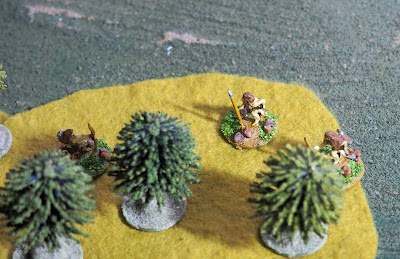 The first hunter had backed away from the bear, which was initially as startled as he was. But it soon emerged into the open, sniffing the air hungrily. 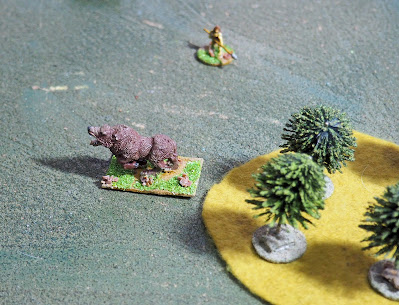 It headed towards the sounds of activity in the other wood. 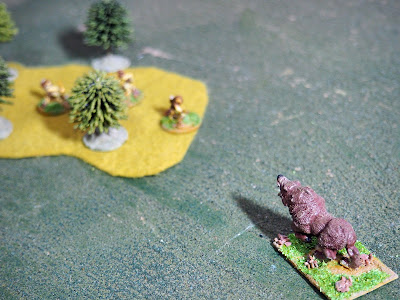 The first hunter had headed elsewhere, exploring a hill on the other aide of the board. He flushed out a small wild pig, chased it down and killed it. 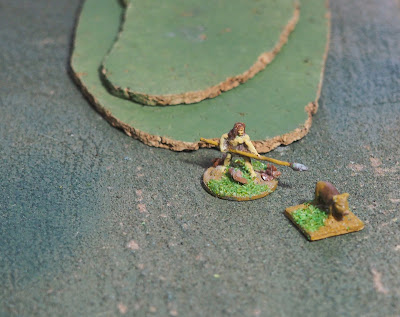 However he also woke up a big cat. He'd have to move more cautiously now. 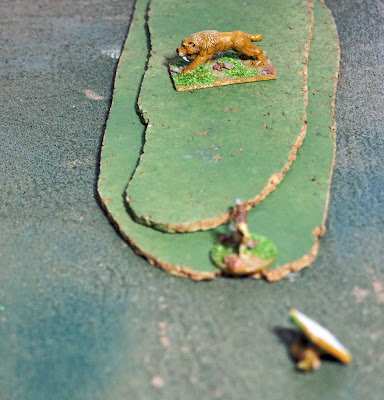 In the woods another hunter had found a critter, but this one was a bad-tempered carrion bird, which attacked him. 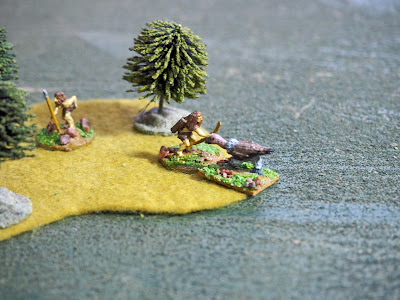 A second hunter came to his aid, and killed the bird, but the fight attracted the bear. The hunters tried to drive the bear away from the kill, but one of them ended up wounded. The bear backed away. For now. 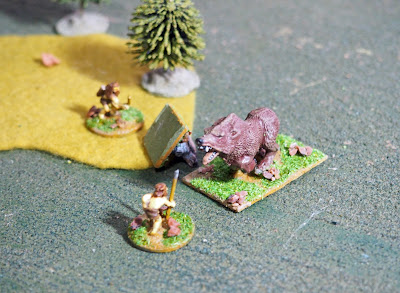 The first hunter flushed out another pig, and brought it down. The big cat seemed surprisingly uninterested. 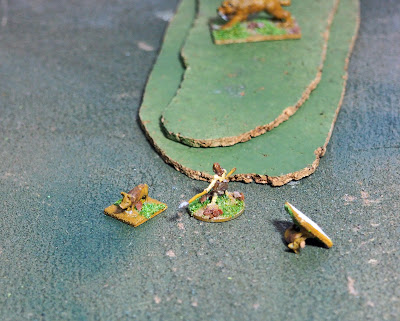 Back in the woods a hunter found some fungus that disagreed with him. All three hunters there were now wounded. 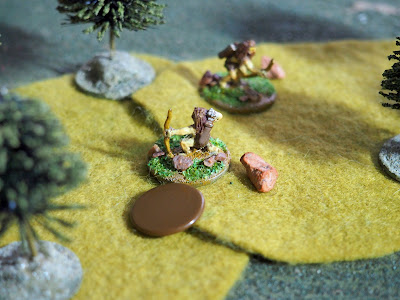 The bear returned, and ate the carrion bird corpse, denying it to the hunters. 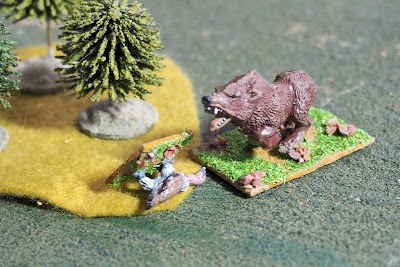 The last couple of turns saw the wounded hunters cautiously searching the woods, whilst trying not to attract the bear. They found little. On the last turn one of them found a pig, and brought it down with an arrow. 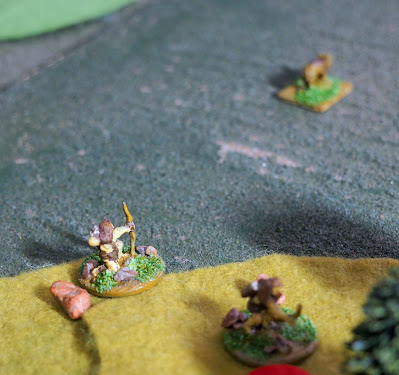 The game has a turn limit, and at the end of it the hunters hadn't reached their goal. Losing one kill to the bear hadn't helped, and their combination of bow- and spear-armed hunters wasn't really strong enough to have taken on the big predator to meet a large portion of their food goal. No hunters were killed, though. 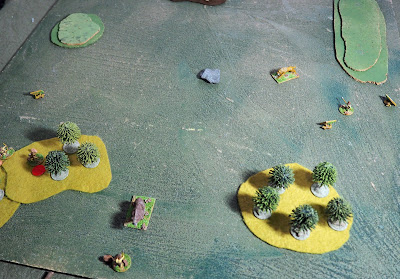 To be fair, they'd been unlucky finding the most dangerous adversary possible on the very first turn. A smaller pack predator would have been easier for the group too kill, but the one that was found - the big cat - was in an area where only one hunter was active, so they'd had to leave it unmolested.
Posted by Kaptain Kobold at 17:43