Last week I was looking at an AAR on the League of Augsburg blog featuring a hypothetical battle set in 1676, during the Scanian War, between two of the largest warships in the world at the time - the 124 gun Swedish ship Stora Kronan and the 108 gun Dane Sophia Amalia.

I thought that it would be fun to set up the action for 'Galleys and Galleons'. I did try to represent the ships exactly as they were in the original game report, but in the end I decided to make both forces the same - I reasoned that the lower quality crew of the Stora Kronan would even out its extra size. I could have increased its C value and lowered its Quality, then piled on more abilities, but I decided it wasn't worth it. I gave both sides their respective monster-ship, plus two ships of the line and a frigate. 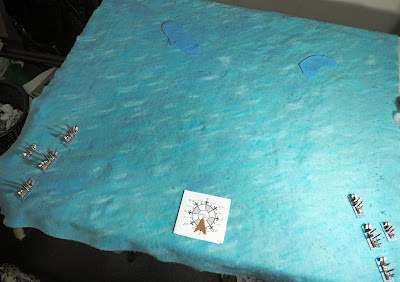 The squadrons were heading almost north, with a wind from the south. True to the original scenario there were some shallows downwind of the two squadrons. They both turned towards each other attempting to gain a positional advantage. a shifty of wind favoured the Danes (right). 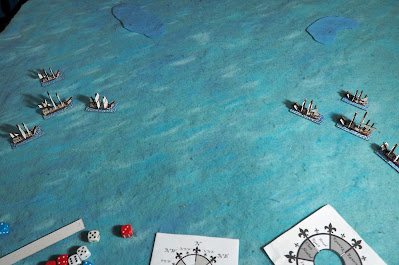 Christianus V opened the battle, its chasers firing at Draken. 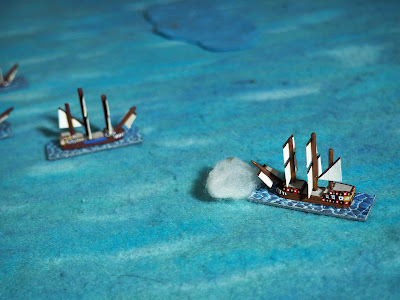 Draken replied with a devastating raking broadside, massively damaging the Danish ship and tearing away its rigging. 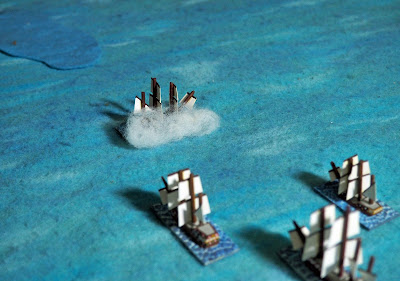 Despite their wind advantage the Danes struggled to get into action as the Swedes formed a solid line before them. 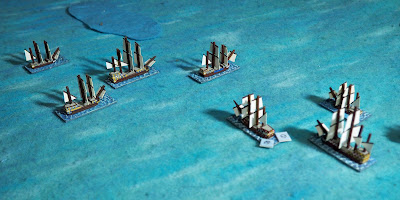 Christianus V turned to engage Draken, scoring some damage back. But disaster struck the Danes when the Dannebroge collided with the Sophia Amalia, both ships taking significant damage. 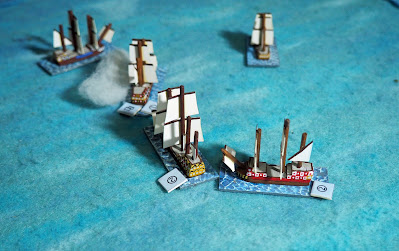 Draken added to the pain, crippling Christianus V with another rake. The Danes had barely fired a shot and their squadron was already heavily damaged. 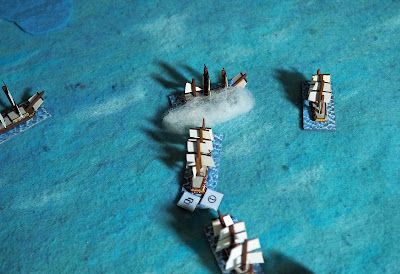 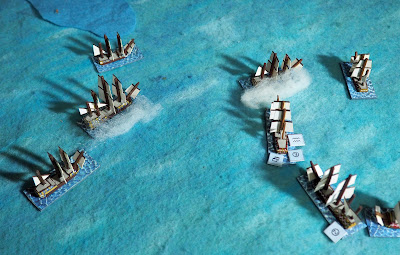 The Danish frigate Hommeren crossed the bows of the Draken, and against the odds its rake scored heavy damage on the mighty warship. 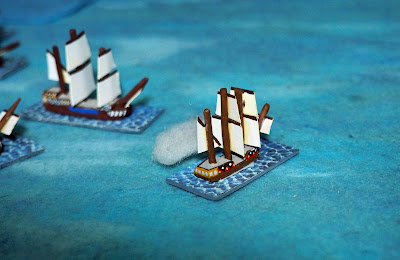 With little option, Christianus V ran aboard the Draken, and boarded it. In a brief action the Danes prevailed and the Swedes suffered the first loss of the action as the Draken struck. 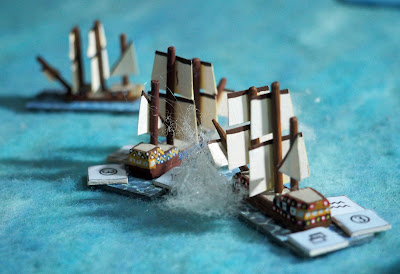 The focus of the action was now becoming congested, and the Dannebroge broke away to the west to try and cut across the rear of the Swedish squadron. It fired a long-range broadside at the Hieronymous. 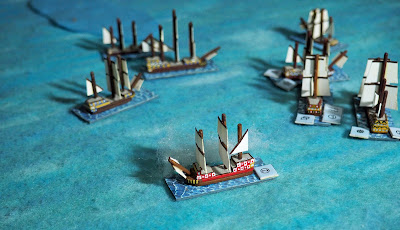 The height of the action. at the top of the picture the two frigates, Fenix and Hommeren were hotly engaged, suffering both hull and rigging damage. The Swedish Stora Kronan was trying to work past the struck Draken, followed by the Hieronymus. The Christianus V was still grappled to the Draken, whilst the Sophia Amalia worked past it to the east. Finally the Dannebroge was engaging the Swedes at long range from the south. By this stage the wind had shifted more to the south, favouring neither side. 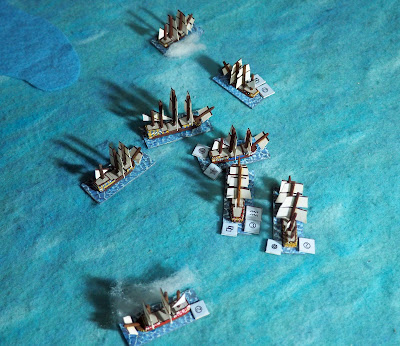 This was not a good day for the Danes. In the confusion of the action the Sophia Amalia fired a broadside into the Christianus V. Already heavily damaged the Danish battleship heeled over and sank. 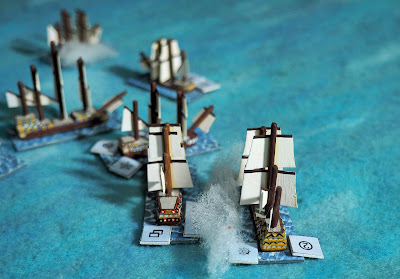 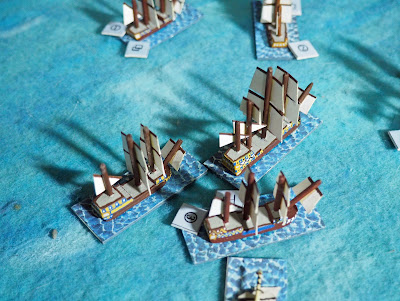 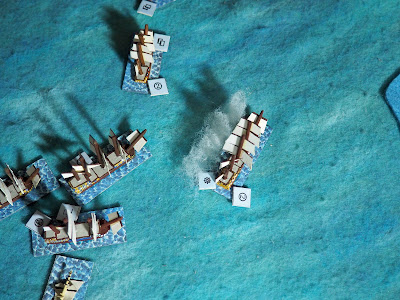 The Stora Kronan fired back, heavily damaging teh Danish flag. 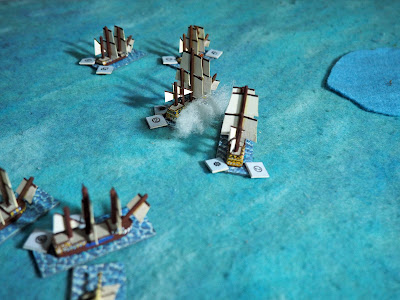 And the Hieronymous, following close behind added its fire. It was too much for the already heavily damaged Danish flagship, which was shattered and sank. 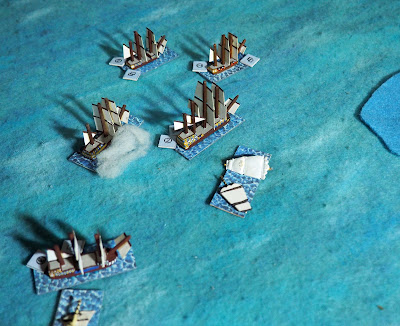 The frigates had almost destroyed each other, but the Stora Kronan added its fire to the action, and the hapless Hommeren simply disintegrated under its close-range fire. 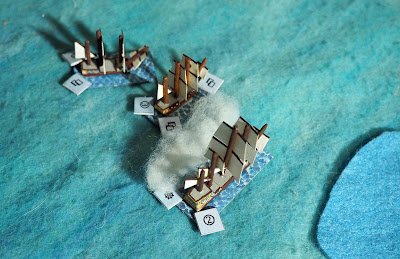 At this point I ended the action. The only operational danish ship, the Dannebroge, was too far from teh Swedes to be a viable threat, and it would take several turns for either side to get to grips with the other. I reasoned that the Dannebroge would flee, and the Swedes consolidate and repair.

The Danes had suffered a crushing defeat, with their flagship and a ship of the line sunk, as well a a frigate. The Swedes had been damaged, but all of their ships were still afloat, even their single loss.
As promised, here are the stats:
Stora Kronan / Sophia Amalia
Q4 C5 - 72 pts
Square rigged, Carronades, Chasers, Drilled Soldiers, Flagship, High Castles, Sluggish
Draken / Hieronymus / Christianus V / Dannebroge
Q3 C4 - 52 pts
Square Rigged, Chaser Guns, Drilled Soldiers
Hommeren / Fenix
Q3 C2 - 40pts
Square Rigged, Chaser Guns, Razee, Relay
The Flagships really made for easy activations, but true to any game of  'Galleys & Galleons' both sides suffered turns where they failed ridiculously easy ones. This was teh cause of both of the collisions. And it was the Danes' collision that really cost them the action, leaving two of their key ships badly damaged before the firing had really started.

Sinking from excess damage, caused by extra hull criticals, seems rather too common, and I may look at tweaking this slightly; perhaps excess hull hits only cause a ship to sink if they are holes or the vessel is already holed from an earlier critical.

Anyway, thanks to Barry at the League of Augsburg for inspiring a fun little scenario.