The Capture Of Santa Catarina

One site I like to browse through from time to time is Three Decks, and the other day I came across this action - The Capture of Santa Catarina. You'll notice that apart from a one line description of the location and end result there is basically no information given aside from the names of the ships involved. This makes it an easy action to set up as a game, since I can just make the whole thing up.

I decided to run it as a Galleys & Galleons 'Blockade Runner' scenario - the Santa Catarina, a Portuguese carrack, would have to run the gauntlet of two Dutch cromsters, the Witte Leeuw and the Alkmaar. I ran the carrack straight out of the book, but in order to get the points to come out for the scenario setup I dropped Shallow Draft and Master Gunner from the cromsters, but added Carronades to make up for the loss of the latter trait.

I set up the terrain randomly and ended up with a chain of islands from one corner to the other. The Santa Catarina gets to choose the corner it starts in and the wind direction, and I went for this, with the wind on the starboard beam (from the East). The Dutch have to set up on the centreline, facing directly into the wind. They deployed to cover both passages through the islands. 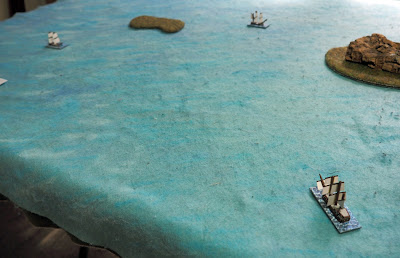 The Santa Catarina headed for the north passage, covered by the Witte Leeuw. This would leave the Alkmaar with the choice of heading into the wind to intercept, or working north around the central island, which would take time and activations. 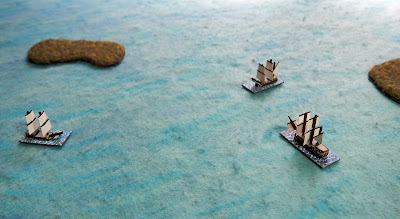 The Witte Leeuw closed on the Santa Caterina, receiving a damaging broadside as it did so. 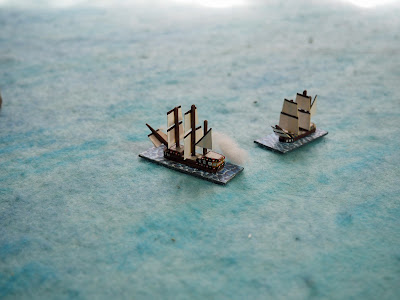 The crew panicked and failed to fire their own broadside as they cut across the Santa Caterina's stern. A shift in the wind to the North-East did give them a slight improvement in their chances of combining against the Portuguese vessel, though. 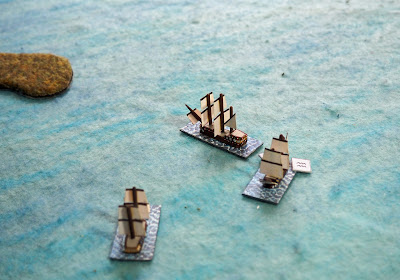 Unfortunately fortune did not favour the Portuguese, who failed all of their activation rolls leaving the Santa Catarina unable to avoid running aground on the central island.
So a win for the Dutch, even if they did little to achieve it. 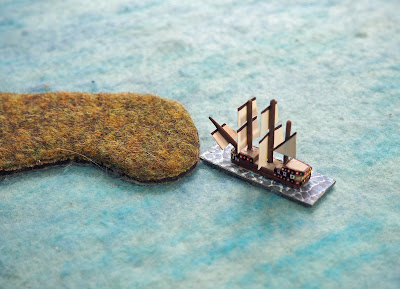 I set the game up again, with the same wind and positioning. The Witte Leeuw managed a better approach this time, and got in a broadside on the Santa Caterina, but scored no significant damage. 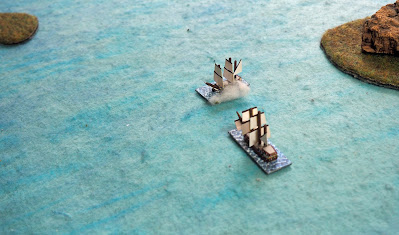 It also not blocked the carrack's movement. A turn to port would see it heading towards the island again, whilst one to starboard wouldn't clear the Dutch vessel. So the Santa Catarina ran aboard the Witte Leeuw and grappled. It didn't have enough actions to initiate boarding, though. 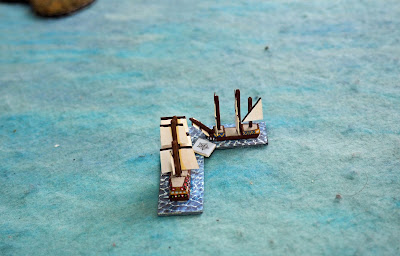 The Witte Leeuw considered the odds of winning a boarding action against the massive Portuguese ship, and opted to cut grapples instead, sailing away. 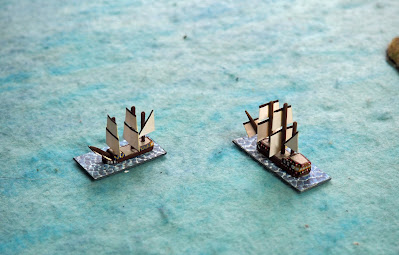 The Alkmaar was working around the island this time, but the Witte Leeuw turned rapidly and began to shadow the Santa Caterina. Fire from the carrack began to damage the Dutch ship. 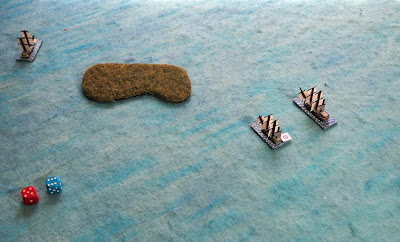 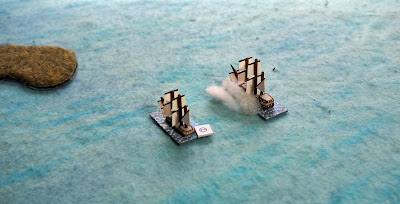 The Santa Caterina pulled ahead into open water as the Alkmaar came up. A single broadside saw a fire start on the Dutch ship ... 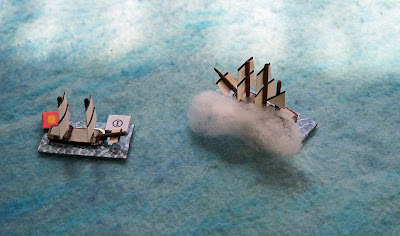 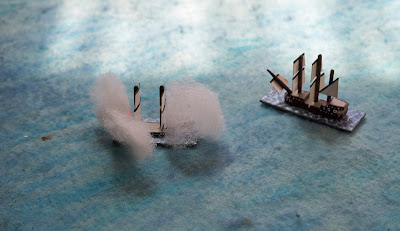 The Witte Leeuw pursued the Santa Catarina, but it was obvious it wasn't going to catch it before it escaped. 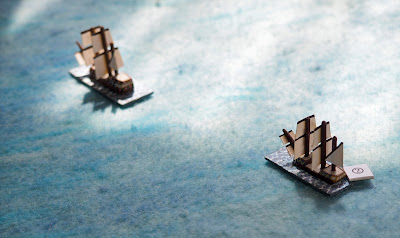 So a win for both side. Each game took 15-20 minutes to play, so it was a perfect lunchtime entertainment.