With some new treasure junks based and ready to use it would have been rude not to have played a game with them as soon as possible. So yesterday I did just that.

I set a simple pursuit scenario, with three junks attempting to cross the table and a couple of pirate galleys trying to capture them. 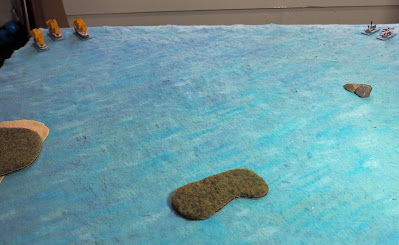 I ran one junk straight out of the book, with the flagship trait. The other two dropped this trait. 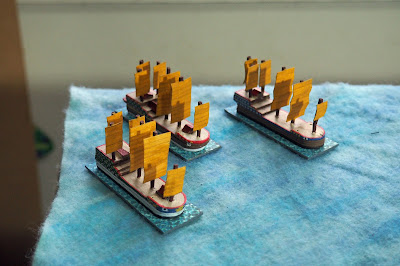 The galleys used the Barbary Galley stats from the book. The junks outgunned them, but with their intimidating swashbuckler traits the galleys actually had a slight edge in boarding, despite the size disparity. 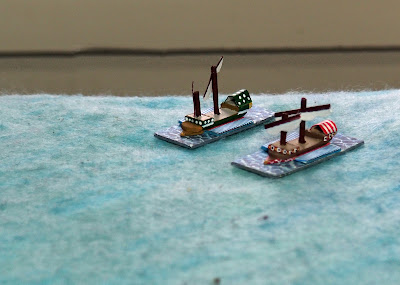 The galleys closed up whilst the junks tried to extend their line to bring their guns to bear. 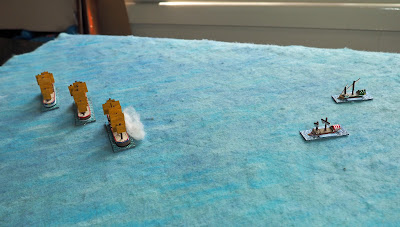 The initial exchanges of fire were ineffective. 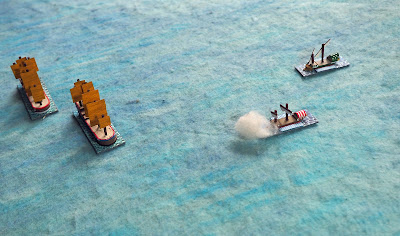 There was an island towards the centre of teh board, so the junks would have to turn to avoid it. This was the perfect place for the pirates to launch their attack, when their opponents had their attentions divided. 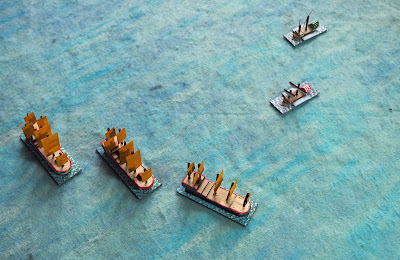 The red galley swept in and grappled the flagship. 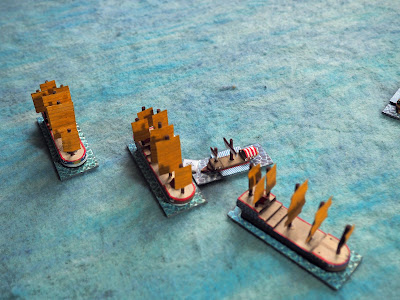 The other junks kept turning as a melee broke out across the decks of the galley and the junk. The green galley was closing in now as well. The middle junks gunnery did not dissuade it. 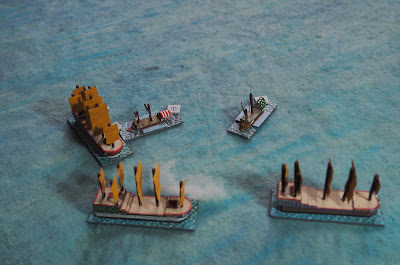 The green galley boarded the lead junk, but the pirates were thrown back. 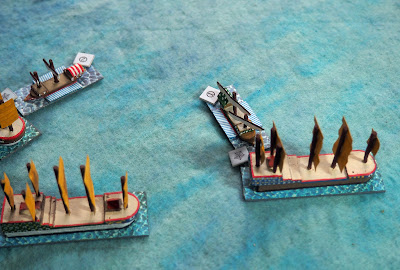 And what was worse was the red galley striking to the junk flagship as it lost the boarding action it was fighting. 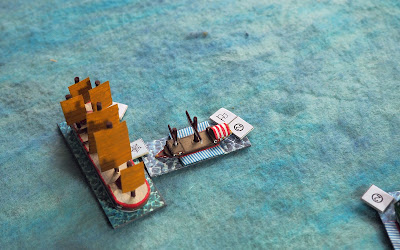 The green galley now found itself being attacked and boarded by the middle junk. With no hope of support it too struck. 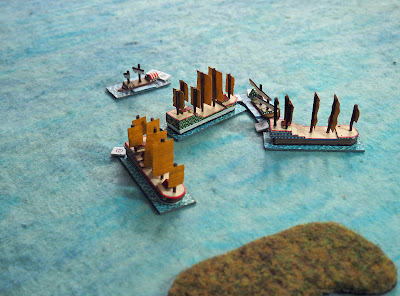 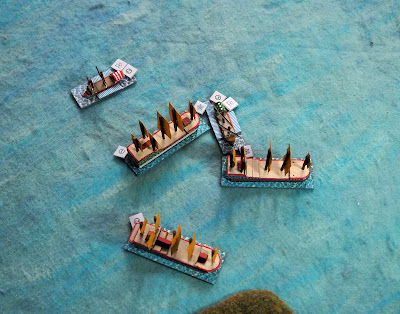 But the junks still had to escape teh board, and their formation had been broken up by the galleys' attacks. The island was no making things difficult and disaster struck when the flagship ran aground and was wrecked. 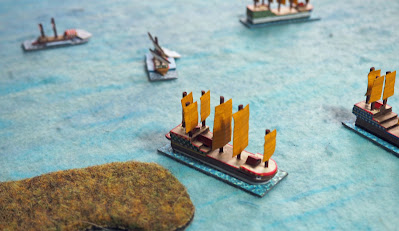 One junk was now on a course for safety, but the third junk was having navigational difficulties and left the board well away from the designated safe zone. Maybe it made it to safety eventually. Maybe not. We'll never know. 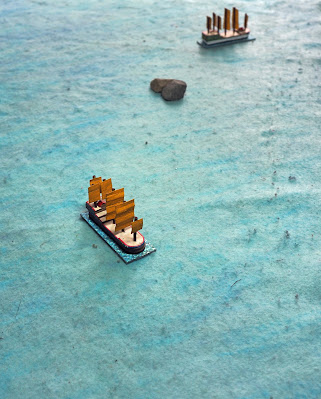 So this first game was something of a draw; both pirate galleys had given up the fight, but the junks hadn't really escaped to safety.

I set up a second game later. There were fewer islands, but there were some rocks. Fortunately the junks' route across the board went straight between them, so long as they held their course. 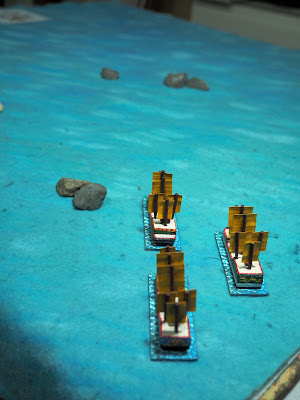 The pirates adopted a similar plan to the previous game, aiming to intercept the junks whilst they were negotiating terrain. 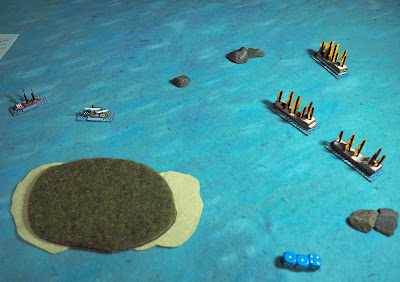 The galleys fired as they approached, and holed the flagship below the waterline. 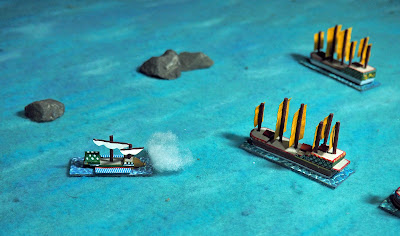 The flagship returned fire, but it was ineffective. 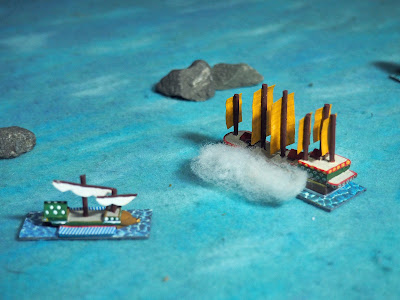 And then the green galley boarded. 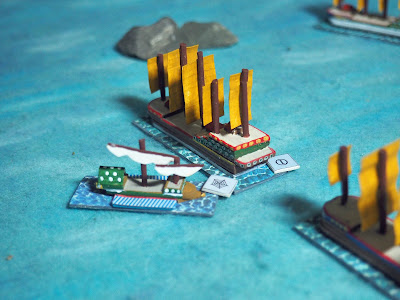 The action was over quickly - the flagship failed an activation test and struck almost immediately. 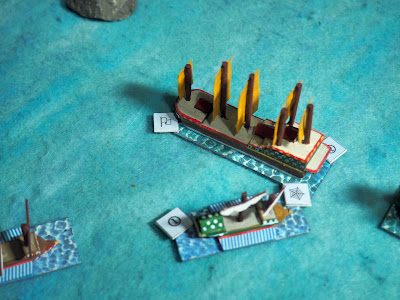 The green galley ungrappled and went after the next junk in line, boarding it as well 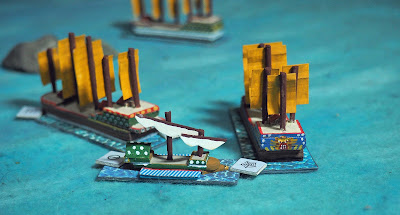 Meanwhile the red galley steered through the rocks and chased after the third junk. 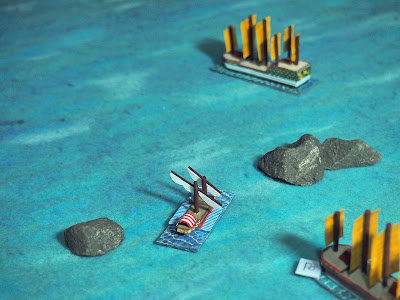 However teh gunners on this junk were more efficient than those on the flagship. A single broadside shattered the red galley, leaving it limping. 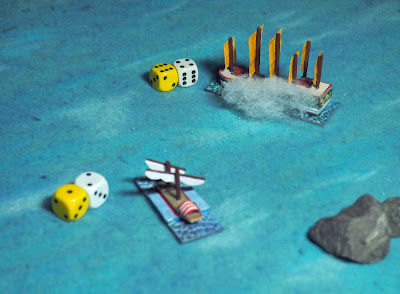 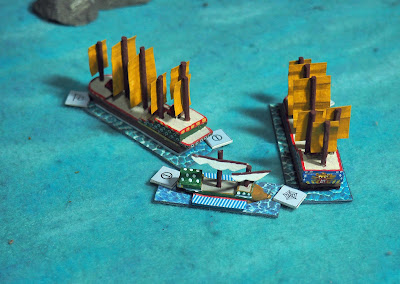 The third junk had an easy wind to escape with, however, and teh red galley had no hope of catching it. It fired a few shots hoping to score a lucky critical, but had no effect. 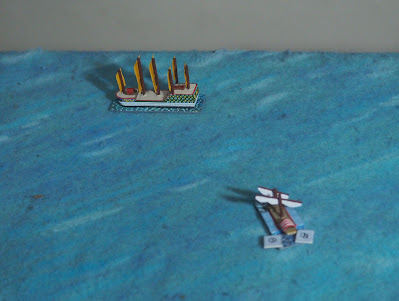 However this was a win for the pirates, with two junks captured for only some damage on one of their vessels. 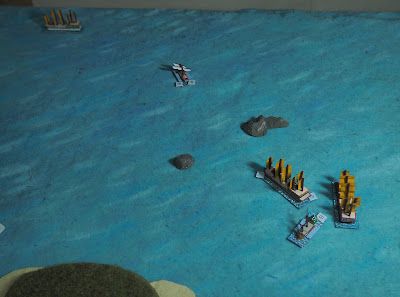 The junks are quite ponderous and tricky to use, but interesting. And I loved how they looked on the table.