The campaign Season starts with each army rolling a D6 and adding the score to their current Resources. Starting with the lowest scoring nation, they choose an opponent to attack.

At this stage all of the nations have 3 Resources. Taking into account tie-beaks, the order was:
Orcs, Elves, Dwarves, Camelot, Undead, Swiss
The Orcs chose to attack the Dwarves. The Elves picked the Undead as their target. And that left Camelot attacking the Swiss.
Game 1 - Orcs attacking the Dwarves
The Dwarves chose terrain designed to limit the Orcs' surprisingly enormous mounted contingent, but it all ended up on one side of the board, and the Orcs attacked out of it. The Dwarves formed a long line in the open. The Orcs massed their beasts and riders on on flank looking to overwhelm the Dwarves there, whilst screening with the hordes elsewhere. 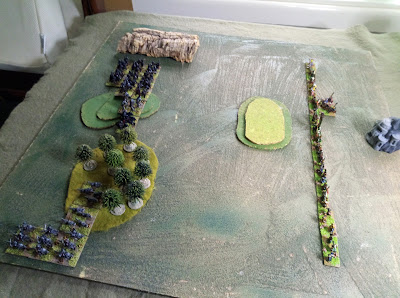 The Orc attack goes in. 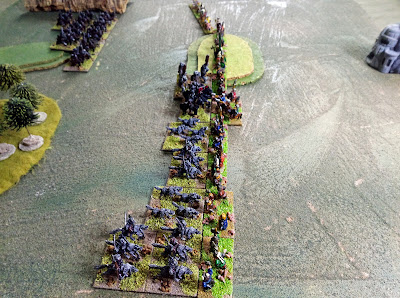 The results were mixed, but somewhat favoured the Dwarves, whose warband accounted for a number of Orc elements. The orcs broke through in the centre, though, with their knight general and the supporting trolls (behemoth). 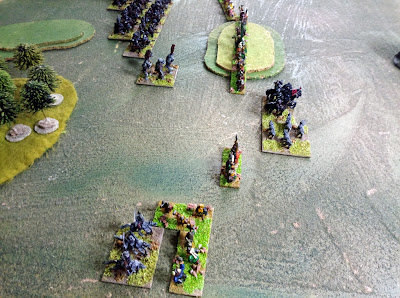 Whilst the Dwarves mopped up the Orc wolves and wolf-riders, the rest of their army attempted to respond to the breakthrough. They stopped a rapid advance on the stronghold, and fell back on the hill in their centre. 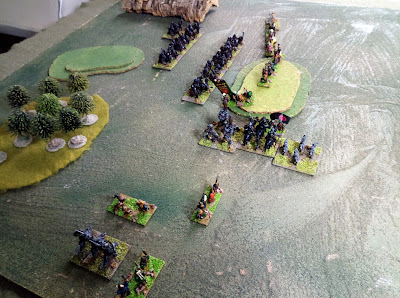 The Orcs attacked up the hill, and the Dwarf general fell. But the Orcs had still taken more losses, so the battle continued. 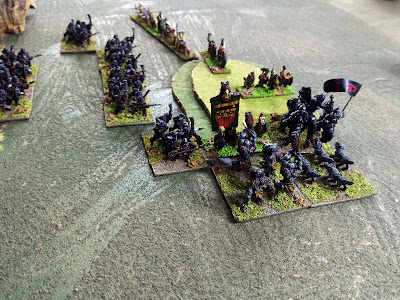 The Dwarves counterattacked, and sliced their way through the Orc hordes. The Orc army was now 1AP away from breaking. 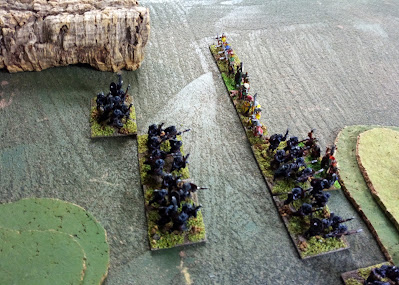 However a good PIP roll saw them able to bring back three hordes (left of picture), and mount a final attack in the centre to push the Dwarves to their breakpoint. 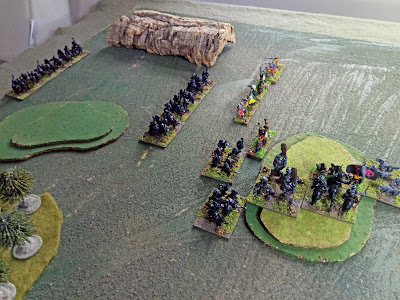 The Dwarves lost 10AP and their general, whilst the Orcs had lost 8AP. The Orcs gained a point of Prestige for the win, plus another point for killing the enemy general. The Dwarves lost a resource pint to the Orcs.

Game 2 - Elves attacking Undead
The Undead formed a formidable lines of hordes, whilst the Elves had a hill on their side of the board on which they planned to make a stand whilst  their hero and some riders made a ride around the flank to take the enemy stronghold. 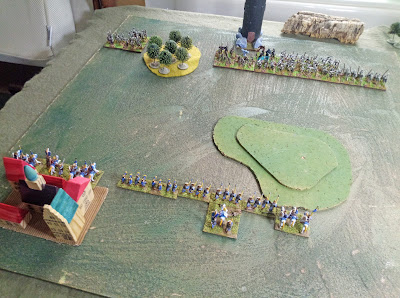 However the PIPs for both sides were poor at the start, and the Elves found themselves unable to even take their hill position as the Undead advanced upon them rapidly. 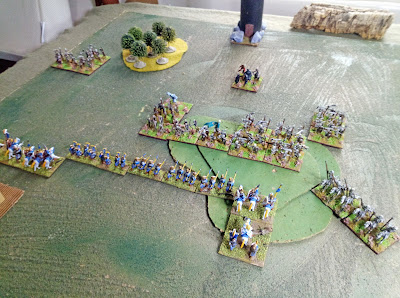 The initial fight took place along the crest of the hill, and the Undead fared badly, losing their entire centre. The Elves began a slow steady advance. 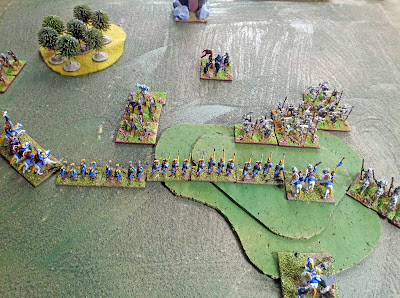 The Undead scored 1 PIP on three consecutive bounds as the Elves continued to push forward. Their army slowly disintegrated. 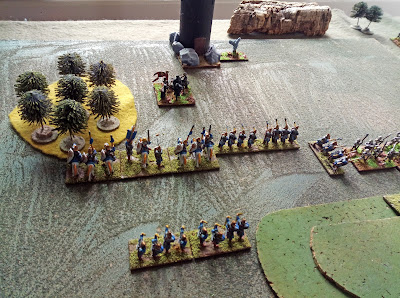 The Elven general slew the Necromancer to win the battle. 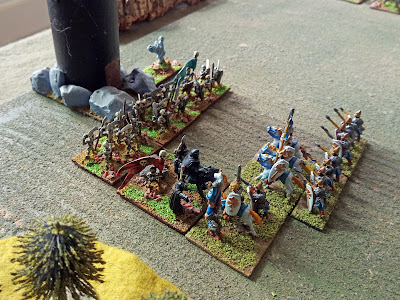 The Elves took a Resource from teh Undead, and also scores 2 Prestige - one for winning the battle and the other for killing the enemy general. They won it 10g-0.
Game 3 - Camelot attacking The Swiss
I know in my initial mail I called the Swiss The People of the Valley, but I can't help thinking of them as Swiss. They're my generic barbarian warband army in this campaign.

Anyway, the Swiss defended and placed piles of bad going to make Camelot's life as difficult as possible. Camelot went for a knight attack in the centre against the Swiss pikes, whilst committing their heroes to an attack on the village. Galahad the paladin and some knights attacked down the left flank in an attempt to break through to the enemy stronghold. 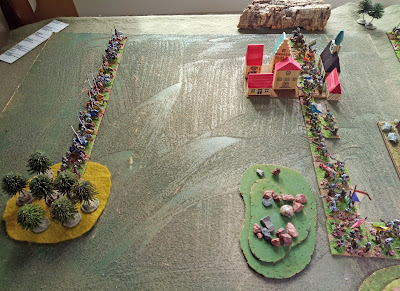 The armies approach each other. 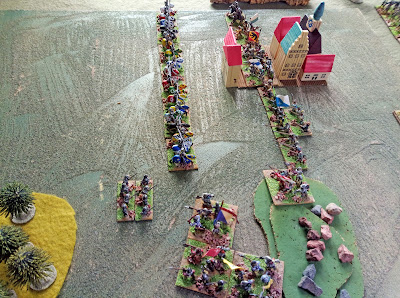 On the left, the paladin and knights attack the Swiss horse and foot and are victorious. 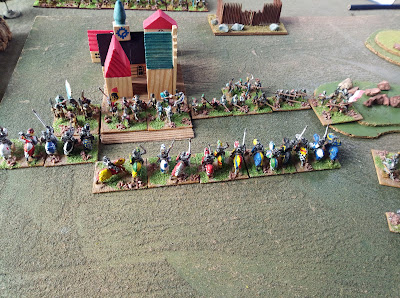 The knights charged in the centre, keeping the Swiss pinned. Arthur and Lancelot had success in the village driving the Swiss back, but the Swiss spears held firm. 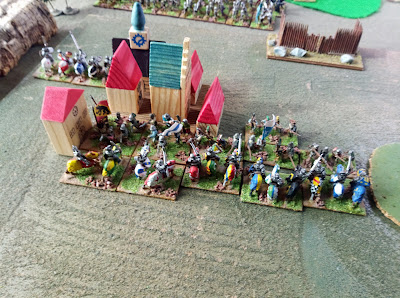 The Swiss had defeated the Camelot blades on the right and were now closing in on Arthur's centre. But time was running out for the Swiss - Camelot had cleared the village and was advancing on the Swiss stronghold. 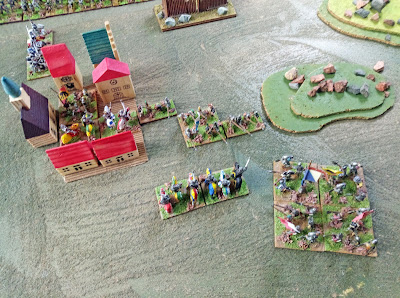 The Swiss general led his pikemen in a rapid advance on the knights in Camelot's centre, as the Swiss foot moved to support them on the flank. 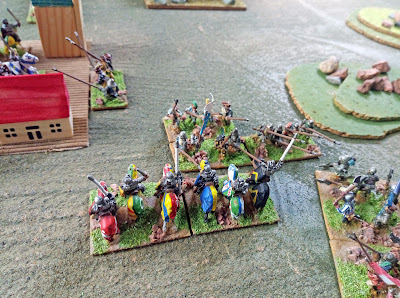 Disaster! The Swiss general fell to an unlucky combat roll! Camelot were victorious. 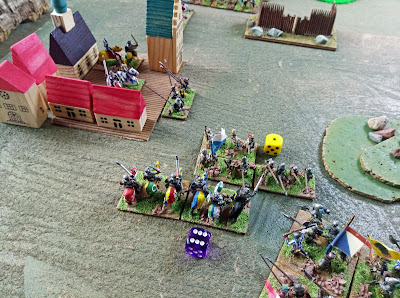 The next round will see the odds of some armies being the attacker change, as well as Camelot being assured of the Warlord bonus.
Posted by Kaptain Kobold at 05:30