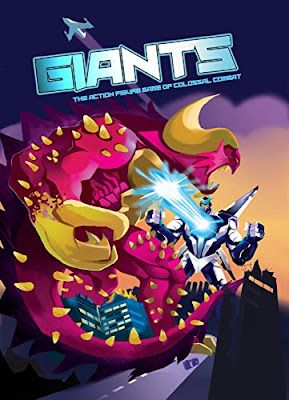 My copy of 'Giants' arrived today. Billed as 'The Action Figure Game of Colossal Combat', this is the latest incarnation of 'Giant Monster Rampage' (GMR), and is a significant reworking of the game.

To be fair a lot of core concepts are the same. It still uses D10s, you roll under stats when making tests and combat is a simple target number you must beat on a D10 with attacks inflicting wounds that are then potentially blocked. However the game has been drastically streamlined and simplified.

Over the years GMR has been through three additions, and grew into quite a monster. This made it a great game, but there were a lot of abilities and moves to remember and some of them weren't necessarily as balanced as they could be.

The first playtest version of 'Giants' came out several years ago, and I gave it a go and wasn't that happy with it. Oddly enough I think it was because it seemed to simplistic compared to the game I was used to. However when fiddling around with various kaiju games over the past few weeks I came across one of the playtest files and realised that the game dealt with some of the issues I was trying to resolve. So I ordered the published version.

It's a slim book, at around 50 pages. It starts by telling you what you need to play, introduces various core concepts and suggests some scenario setups. It then goes into the details of movement and combat and then finally has the rules for designing your monsters.

The turn sequence is simple. You roll initiative at the beginning of the game to determine the sequence in which the monsters will act. Each monster takes their turn - they move, they attack (which must be either ranged attacks or close combat attacks, but not both), they gain energy and then they roll to recover damage. Movement is in a straight line only, either forward, backwards or to the side, with the distance varying depending on which one you choose. You can change facing once, either before or after the movement. Attacks have a range (if ranged) or a reach (if melee). You pick a target for each attack you want to use, and roll a D10 against a target number. If the attack hits then you may inflict a number of wounds on the target. But the target gets to roll to save each wound, with the statistic you roll against being determined by the damage type of the attack. A number of attacks cause knockback, so target monsters can be pushed or thrown around the battlefield. Some effects and attacks require the monster to expend energy, and you gain the points you'll need for the next turn after your attacks, depending on your chose Energy value. Finally you get to make a roll to recover wounds or stress.

Stress is a new addition. A number of effects can cause a monster to gain stress points, and they are tracked separately to wounds. For example critical hits cause stress to the target, whilst a critical miss causes stress to the attacker. If you reach ten stress points, your total is set back to zero, but you must lose a point from one of your statistics. You can also spend another monster's Stress to force it to reroll anything from attack rolls to recovery rolls. So over time accumulated stress will either wear a monster down, or cause it to become less effective and easier to wound. It's a neat idea.

Finally, we come to building a monster. As with GMR you have a number of points available - GMR seemed to work well at around 200pts, but Giants seems to use 300pt builds as a standard. You choose one of four origins (Imbued, Built, Born or Mutant), each of which gives you an automatic ability of some kind. You then buy values for your statistics - Distance, Dexterity, Strength, Toughness and Energy. Finally you buy attacks and abilities. In GMR attacks were generally fixed things - a Flame Blast was a defined attack, for example, with its own range, energy cost and so forth. In Giants you build every attack from the ground up - you choose a range or reach, how many wounds it inflicts, a damage type and an energy cost, and then you can bolt on various modifiers to make the attack unique. For example two monsters may both have a ranged attack that goes up to 18", scores two wounds and costs 2 energy to use, but one may have the Energize upgrade, which means they can spend extra energy to increase how many wounds it scores, whilst the other could have the Spray option, which allows you to attack more than one target. There are far fewer upgrades and powers to keep track of, although what is available seems pretty comprehensive.

There are a few sample monsters at the back of the book to help you get started - the obvious Atomic Dinosaur, Insect Deity, Robot Defender and Gigantic Gorilla.

I should point out that I haven't had chance to play Giants yet, but I'm impressed with what I've read and am keen to get it on the table and see how it plays out. One of the design goals was to create a game where the monsters move around more, as with a few figures it's often easy for everything to become a static brawl in the centre. The rules for knockback, facing and how ranged attacks work are all designed to keep monsters mobile.

Giants is currently available from Amazon in print or Kindle format.