You can read Part One of the campaign HERE.

Round Two of the campaign saw Primus having to pick their most experienced gladiator, so the crowds got to see Ombos again. Secundus was asked to provide a heavy gladiator, so the novice Murranus was sent out to fight. Finally Tertius got a free pick so I randomly selected Hippolyta.

The pairings saw Murranus against Publius (who had killed his predecessor), Hippolyta against Artemisia and finally, in a rematch of their Round One fight, Ombos against Varica. 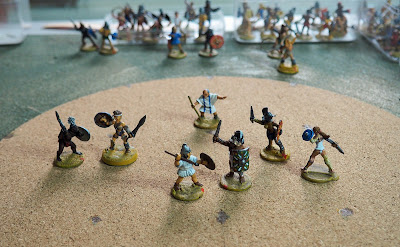 Round 2 - Bout 1 - Ombos (Thraex) vs Varica (Barbarian)
This was a quick fight. Ombos quickly wore down Varica with a few Glory attacks, and then a lucky hit saw them flat on the sand. 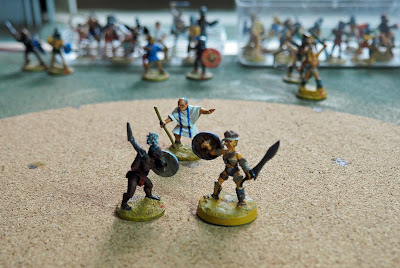 Ombos moved in quickly and delivered a telling blow. The crowd were very much behind the thraex at this stage, and did not grant mercy to Varica.
Ombos picked up 2 Prestige for Primus, whilst Tertius would be looking for another gladiator. This was Ombos' second bout, so he became skilled and opted for +1 Attack. 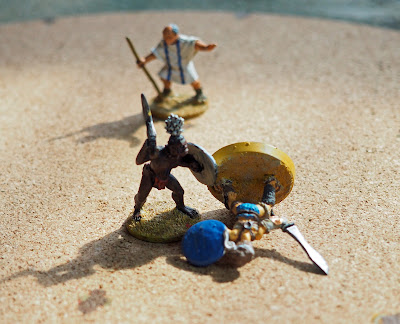 Round 2 - Bout 2 - Publius (Veles) vs Murranus (Murmillo)
Publius had defeated Murranus' predecessor in the previous round, so the murmillo was out to avenge his team-mate. Publius tried the same strategy as before; a few quick crowd-pleasing javelin throws and then into a close fight with their cheers behind him. It didn't work as Murranus responded with a kick and shield-charge which saw Publius out for the count. However the crowd were merciful, so Publius earned 1 Prestige for Primus and Murranus picked up 2 Prestige for Secundus. This was Publius's second bout so, despite losing, he acquired a skill and, like Ombos, went for +1 Attack. 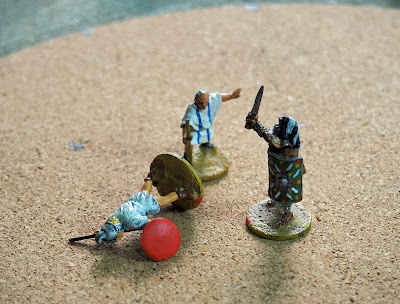 Round 2 - Bout 3 - Hippolyta (Murmillo) vs Artemisia (Thraex)
This was a brutal slide and dice fight, with both gladiators ended up wounded. 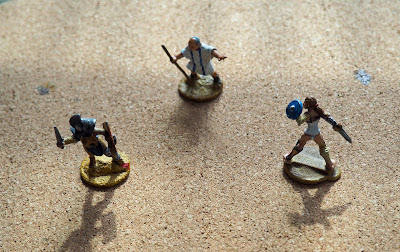 But it was the nimble thraex Artemisia who emerged victorious, to give Secundus 2 Prestige. Hippolyta survived to give Tertius 1 Prestige. 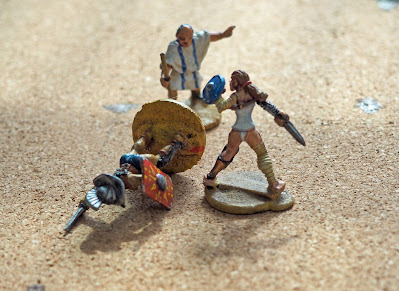 So at the end of Round two, Primus had 7 Prestige (three wins and only one missio defeat), Secundus had 6 Prestige (three wins) and Tertius had 3 Prestige (three participation trophies).
On to Round Three. Tertius replaced the deceased Varica with another barbarian, Bregans. And the editor decided that he wanted to see him fight, as Tertius' least-experienced gladiator. Primus had to offer a heavy, so was restricted to Syphax, whilst Secundus had to put forward his only light, the sagittarius Teucris.
These were the pairings: Syphax was matched with the dimacherus Herminia, whilst Bregans faced the murmillo Murranus. And Teucris was up against the popular Ombos. This bout would be the first where the winner could gain 3 Prestige, for not only winning but for also beating a skilled gladiator with a non-skilled one. 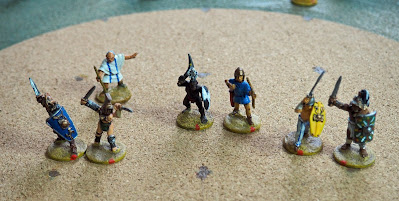 Round 3 - Bout 1 - Syphax (Crupellarius) vs Herminia (Dimacherus)
The thing with the dimacherus is that they are all about attack. Their speed is fairly average and their defence fairly light, so they need to keep up a series of strikes in order to avoid being hit. Herminia got far too few strike cards early on and couldn't easily compete with the well-armoured and implacable Syphax. 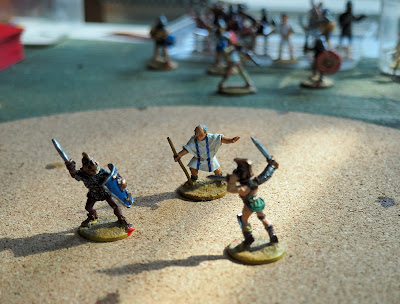 At one point she did manage to trip him, which is always bad for the slow gladiators, but he used his shield to knock her feet out from under her as well, and bought time to stand up. 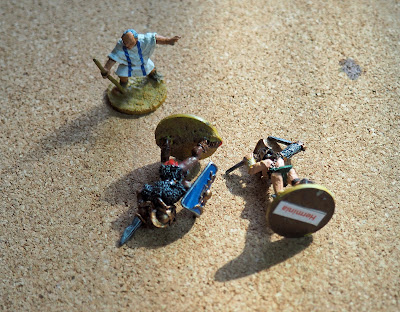 Anyway, eventually he knocked her down and she didn't get up. The crowd had wanted to see some skillful swordplay from the dimacherus, and hadn't got it, so they weren't merciful. This left Tertius looking for another new gladiator. Meanwhile Syphax picked up 2 Prestige for Primus. 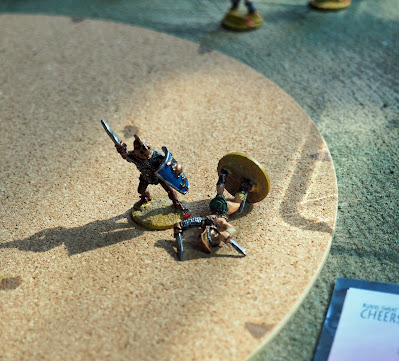 Round 3 - Bout 2 - Ombos (Thraex) vs Teucris (Sagittarius)
Like the dimacherus, the thraex is very much about attack. The sagittarius is very much about evading their opponent with their lightning sped, and hoping for the Glory cards needed for shots.
Ombos got all of the Glory cards. He quickly hit Teucris for a couple of light wound, slowing him. 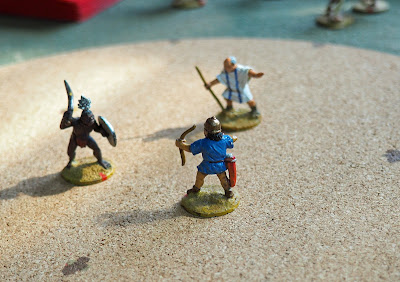 Teucris did manage to open up a gap, and even got in a couple of shots with his bow, but to no avail. 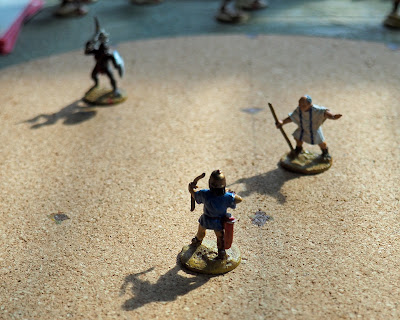 Ombos closed up and Teucris was defeated. The crowd were still out for blood, and weren't merciful towards the archer.
Ombos earned Primus another 2 Prestige, as well as scoring his third win. 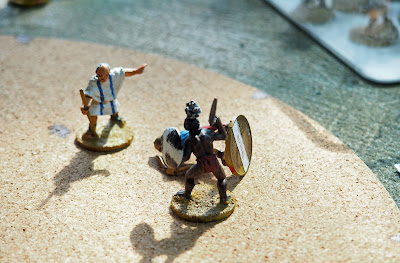 Round 3 - Bout 3 - Bregans (Barbarian) vs Murranus (Murmillo)
There would be no subtlety in this fight; it would be a simple hack, bash and defend. Murranus got lucky early on, wounding Bregans and slowing him down, thus robbing him of his only real advantage over the heavy murmillo. 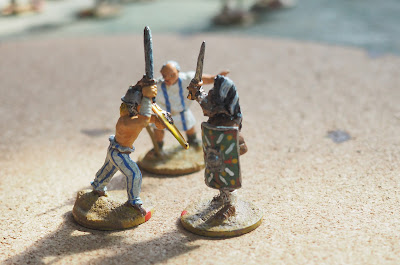 The fight ranged back and forth, bit Murranus kept his nerve and took down the barbarian. However the crowd had been entertained, and were inclined to mercy. Bregans earned 1 Prestige for Tertius, whilst Murranus earned 2 prestige for Secundus, as well as a skill for himself. He increased his Speed to 3. 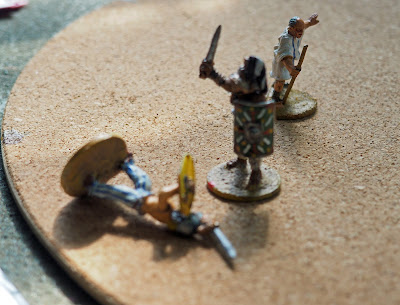 Secundus picked up another sagittarius, Toxaris, whilst Tertius decided to try a hoplomachus and recruited the Greek, Danaos.
So at the end of Round Three, this is the status of the three schools

Albia ('Veles') - 1 Bout
Hipployta (Murmillo) - 1 Bout
Bregans (Barbarian) - 1 Bout
Danaos (Hoplomachus) - No Bouts
Tertius' school is where gladiators and prestige go to die, but Primus is now in a position to win the campaign in the next round, if his gladiators win both of their fights.
Posted by Kaptain Kobold at 16:49