Catherine and I had our first go at 'A Billion Suns' this afternoon, playing a basic Scale 3 game. There's quite a lot of information to unload on a new player who hasn't read the rules before, but Catherine managed to get a reasonable grasp of what she had to do.

We drew our three contracts and got Shipping (picking luxury stuff up from a planet and selling it), Demolition (blowing up rogue space-stations) and Rhexis Harvesting (picking up weird energy from a 'pearl' surrounded by a dangerous energy field). The game was spread across two tables, which you can see marked here by a chalk line. On one table were the three facilities and on the second the planet and the Rhexis pearl. 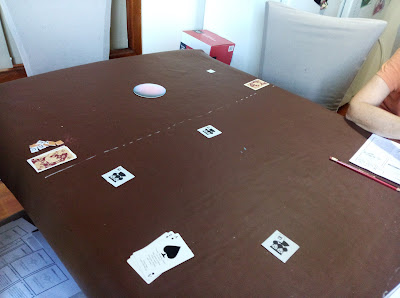 I have outlined how 'A Billion Suns' works here, so won't repeat it. We both had a think about what resources we wanted to commit to the contracts. Catherine decided to harvest the pearl, whilst I decided that the shipping contract looked tasty. We both decided to demolish space-stations. I sent in a gunship, whilst Catherine was more frugal, and sent in a fighter wing. 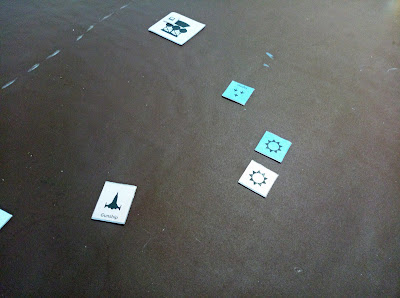 Meanwhile on the other side of the galaxy, two large merchant ships approached a planet, ready to trade. Nearby, unphotographed, Catherine's utility ship was scanning the Rhexis pearl. 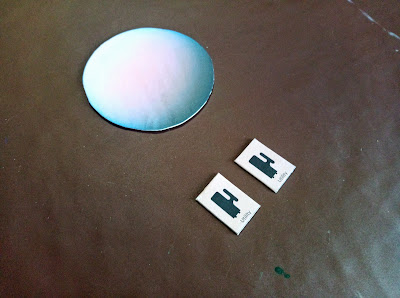 Back at the space-stations, I decided to soften one up and ended up destroying it. This scored revenue, but less than I would have got had I taken the time to erase the AI core first. Still, it was money in the bank, and a second station (with no AI) would pay for the gunship. 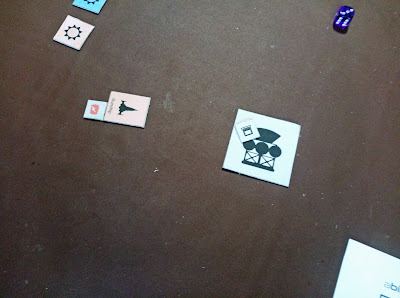 Catherine erased the AI from a station, and set her fighters back into an attack. The station's automated defences wiped them out. She jumped in a squadron or recon ships to try and finish the job, but they were wiped out too. 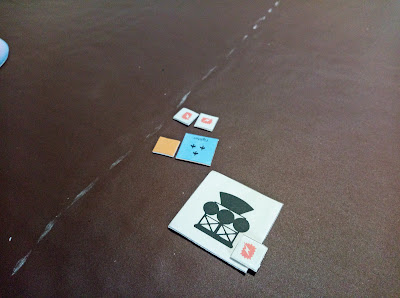 I was accumulating luxuries at the planet, and was ready to ship them out for a score. But I realised that Catherine was about to score big from her harvesting. And if she did it would end that contract as well. Since the demolition contract also had a time-limit. I realised that I wouldn't have time to score revenue from my shipping contract before the game ended (the game ends when two contracts can no longer score revenue). I jumped in a pair of fighter wings, sending them after Catherine's harvesting ship, hoping to destroy it before it reaped the full benefits of the pearl. I failed. She scored. 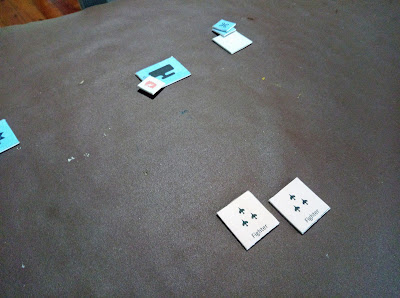 My gunship went after another station, hoping to take it out and justify its cost. The station's shields deflected my attacks and, to add insult to injury, the station then auto-destructed, ending the contract and taking out my gunship in its blast radius. 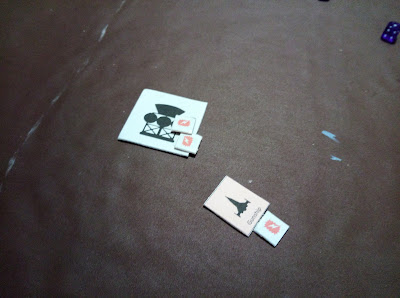 I did earn some revenue from the shipping contract, but not as much as I'd hoped.

Catherine won decisively, spending 5 Credits on ships and earning 12 Credits from contracts to pick up +7 Credits. I spent 11 Credits on ships and earned a measly 7 Credits in return for a total of -4 Credits. Instead of going after Catherine's harvesting ship I would have been better off jumping the fighters in on the third space station - destroying both of them would have left me in credit, if nothing else.

The game played smoothly and quickly, especially given that we hadn't played it before. We're both keen to try it again.