Catherine and I played another game of 'A Billion Suns' yesterday evening. Once again we went for Scale 3 and got Supply, Industrial Espionage and Whaling contracts. This meant three tables, but our dining table is really only good for two if we want space for admin and helms, so we pressed a kitchen work-surface into action as well.
We committed more initial resources in this game. Catherine ignored the Supply contract and sent four wings of fighters to grab a container ship and go for the Industrial Espionage one. She also sent a gunship and utility ship after one of the space kraken. I sent fighters after her fighters, some utility ships on the Supply contract, and a frigate and utility ship combo to hunt kraken.
Initial moves saw Catherine's fighter wings wiped out by mine (see the picture showing the five ones I rolled when shooting at her with passive fire), giving me a start on the Espionage contract, and her kraken-hunting force destroyed by the kraken after we seriously underestimated how nasty their attacks are. This wiped her ships out. I got the Supply contract well underway, and easily killed a kraken with the frigate to pick up and score a heart.
Catherine rallied and sent a swarm of recon wings to escort two of the container ships, allowing her to score all 12 Credits from the Espionage contract on the second round. However I scored the full amount on the Supply contract, plus a kraken heart to finish with a score tat was less negative than hers. I 'won' with -4 Credits whilst she had -10.
This game played really quickly and we felt we had a handle on what we were doing as well. However the Whaling contract wasn't one worth going after with any great degree of commitment, since it takes too long to reap its full benefits and the other two contracts have mechanisms which cause them to time out. We actually didn't play the third round - Catherine worked out that she couldn't stop me scoring the last cards on the Supply contract without pulling in new ships, which would have cost her more than I would have lost by not finishing the contract.
To be fair, my investment in a frigate for the whaling contract was a bit ambitious, although had we had more time from the other contracts I think it would have paid off; it killed two of the beasties during the course of the game, including jump-hopping to a new table and using railguns on one with Power to Weapons to score three 2 damage hits.
Anyway, I still haven't worked out how I'm going to put together ships and so forth for this game yet, so until then I'll be using these boring counters. But at least I'm playing.

Here's the pictures.
The game spread across three 'tables'. 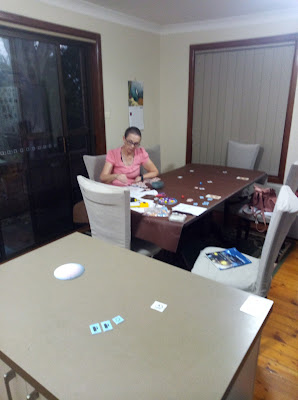 Fighters compete to 'escort' a container ship whilst they search it for a rare specimen. 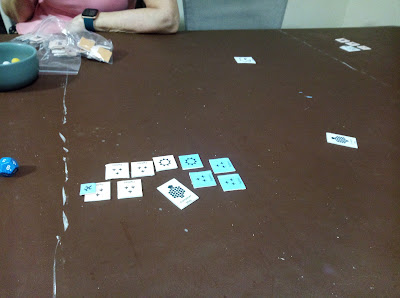 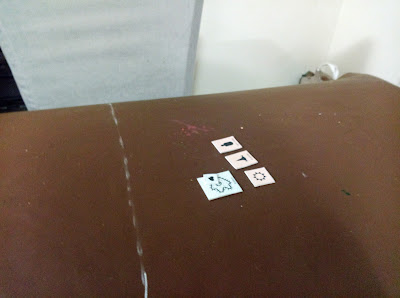 Hunting a space kraken and not getting destroyed by it. 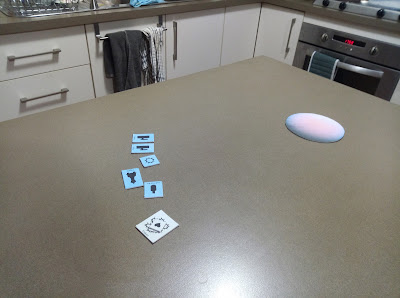 Blue wipes out the red fighters. 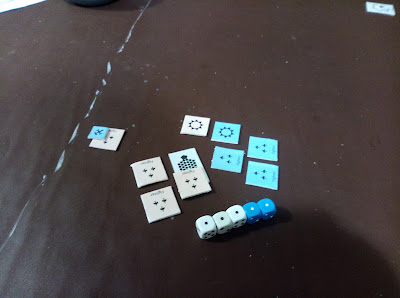 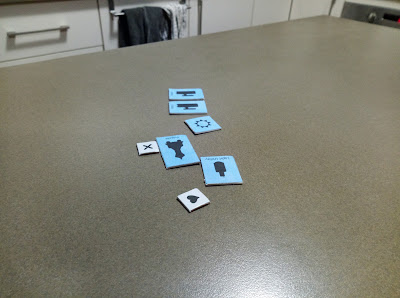